Crude oil pricesrallied the most in almost a month, leading the commodity to close at its highest since November. An uptick in market mood lifted sentiment-linked oil as better-than-expected US durable goods orders helped the S&P 500 trim its losses from last week. Crude oil also got a boost thanks to a drawdown in official weekly stockpiles reported by the US Energy Department.

While the American Petroleum Institute envisioned a 2.5m barrel contraction yesterday, official EIA data on Wednesday showed a 3.8m Bbl drop instead. Meanwhile, US Dollar weakness buoyed anti-fiat gold prices as the British Pound universally gained. This was thanks to odds of a ‘no-deal’ Brexit being priced out. On Wednesday, the UK Parliament voted against crashing out of the European Union without any divorce terms.

Ahead, oil prices await the monthly OPEC oil market report. This will include projected estimates for demand and production. Since the end of 2018, the oil-producing cartel has been dialing down output to support prices (see chart below). Oil has so far rebounded over 37% since the beginning of this year. Granted, the uptick in sentiment has helped this dynamic.

But, it is arguably estimates for demand that is clouding the outlook for the commodity. Slowing global growth (demand) may counter efforts from OPEC to push prices higher. Meanwhile, gold prices will be closely following how the US Dollar reacts to the British Pound. Sterling awaits the UK Parliament, which will be voting on extending the March 29 Brexit deadline later today. 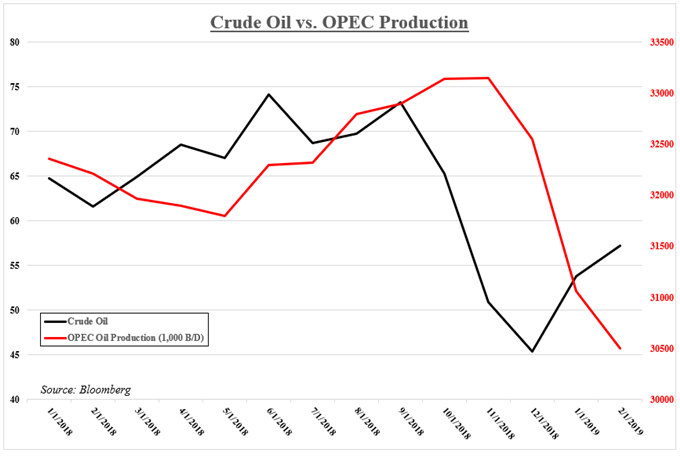 Crude oil prices cleared a key resistance range between 57.34 and 57.93, opening the door to resuming the dominant uptrend since the beginning of this year. Confirming another close higher opens the door to eventually testing the next area of resistance at 63.62, just above the February 2016 rising trend line. But, negative RSI divergence warns that a turn lower may be in the cards as this shows fading upside momentum. 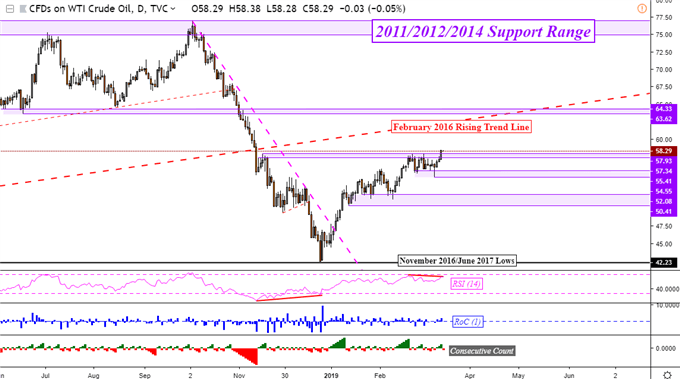 Yesterday, I noted that gold was making an attempt to close above the near-term falling trend line from the middle of February. Zooming in on the 4-hour chart shows a shooting star candlestick at its most recent high. This indicates indecision and can precede a turn lower, given confirmation. Otherwise, the next area of resistance doesn’t appear to kick in until 1321.37. A turn lower has support at 1302.97. 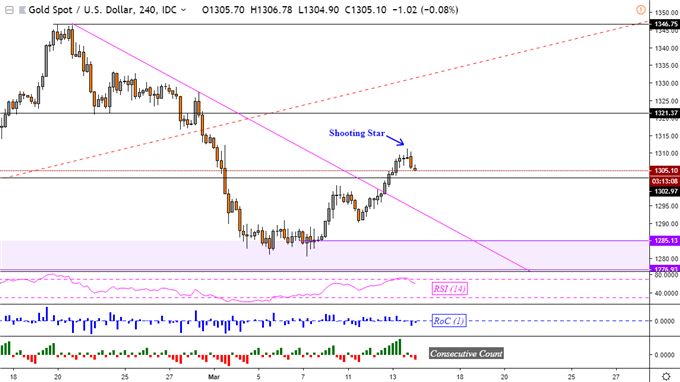