Sentiment-oriented crude oil prices clocked in a last-minute recovery of over 3.7% on Wednesday, avoiding potentially closing at their lowest since March. This may have also contributed to mixed performance in the oil-sensitive Canadian Dollar, which was initially bogged down by a BoC rate hold where no mention was given of a return to a ‘neutral rate’.

Two fundamental developments may have contributed to this. First, supply concerns were raised fater Washington threatened to punish Europe’s circumvention of US-Iran sanctions. The second seemed to be a partial recovery in sentiment and US bond yields after the 7-year note Treasury auction. There, demand faded as the bid/cover ratio fell to 2.30 from 2.49.

This follows an uptick in demand for bonds at the shorter-maturity spectrum, such as yesterday’s 2-year auction and those for 3-month and 6-month bills. In short, this may point to cooling fears of an economic slowdown in the distant future in the context of the rate cycle where the Fed has paused its hiking spree to focus on incoming economic data.

So where does this leave crude oil prices? Well, on the daily chart below we can see that support held as a range between 57.34 and 57.93. This has thus solidified this key psychological barrier. Near-term resistance appears to be around 60.26, the former highs from the middle of March. Just above that sits what could be a potential falling trend line, which may guide the commodity lower in the medium-term. 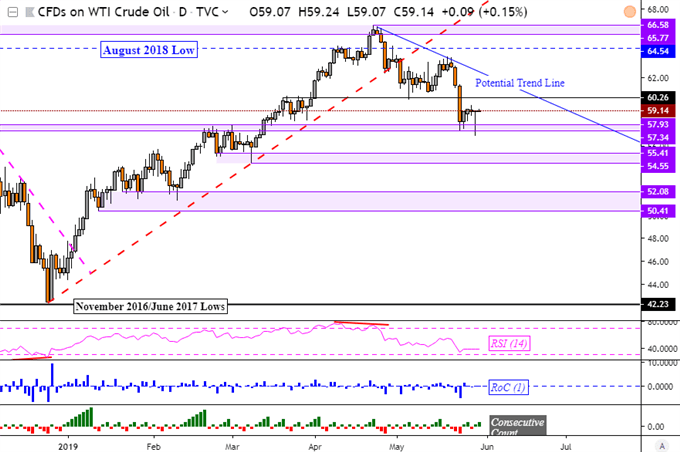 Despite the recovery in crude oil, stocks on Wall Street still ended the day to the downside. The S&P 500 and Dow Jones closed 0.69% and 0.87% lower. While they did get a last-minute boost, like crude oil, their momentum didn’t go as far. This could be due to the uncertainty facing equities amidst a possible escalation in the US-China trade war. Meanwhile, oil had a couple of fundamental developments to appreciate.

With that in mind, we could be looking at a gap to the downside in equities during the Asia Pacific trading session. But, S&P 500 futures are pointing higher. Thus, we may see a similar performance in the Nikkei 225 where the index may trade sideways. Meanwhile, the Australian Dollar looks to local private capital expenditure data (Capex). But an upside surprise may not be enough to offset the over 85% probability that the markets are pricing in of an RBA rate cut in the week ahead. Thus, AUD/USD gains may not last ahead.