To see what fundamental drivers are expected to drive oil through the remainder of the quarter, check out the Q2 Crude Oil Forecast.

Crude oil is trading strongly higher today with fears the U.S. to end Iran trade waivers, extending the rally out of a consolidation pattern. The WTI contract has recently been stuck between lows from June and August and the Feb ’16 t-line and channel slope from January.

There is still much trading left in today’s session, but we will have to see if the 2% shot higher can maintain above the lows from last summer. A reversal back below will put pressure on the aforementioned angled lines. The top-side slope from January has numerous inflection points since then and is viewed as a significant line of support in the near-term.

As long as the upper parallel holds then the bias will be neutral at worst. A break below the parallel and December trend-line will be required to turn the outlook to the downside. Tactically speaking, it is a tough spot to initiate fresh longs, but for those holding from lower prices today’s break above resistance may leave room to hold on for more upside follow-through. There is a minor swing point in the 67s to watch as resistance in the near-term. 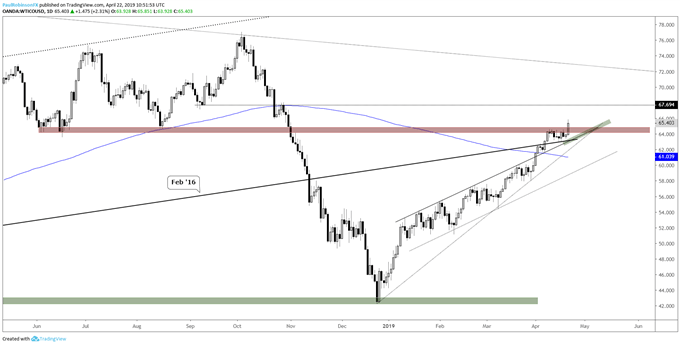 Brent crude oil continues to trade within the confines of the channel starting back in January. The upper parallel has yet to have to been met and will be watched as a possible spot for the Brent contract to struggle at. As long as the lower parallel holds, then the trading bias is neutral to higher. 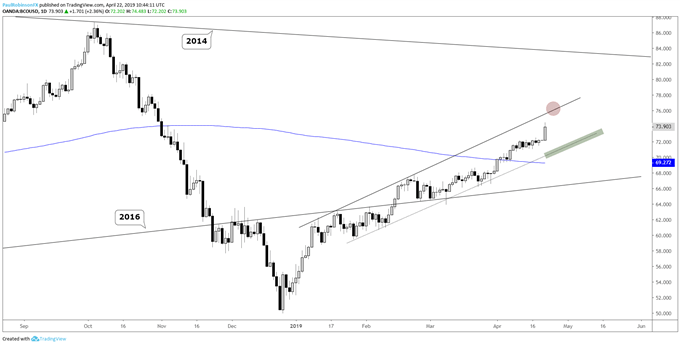