Gold prices rose on Tuesday, benefiting from falling US government bond yields and a timid US Dollar. The anti-fiat commodity, which bears no interest-bearing qualities, typically gains in this scenario. A disappointing headline US inflation report, where CPI (YoY) clocked in at its weakest pace since September 2016, fueled this trading dynamic. Higher interest rates, thanks to the Fed’s tightening cycle, may have contributed to this.

The S&P 500 thus rallied on prospects of a dovish Fed, but sentiment-linked crude oil prices struggled to find upside momentum. This is even despite bullish fundamental news. Preliminary estimates from the American Petroleum Institute (API) indicate that crude stockpiles fell 2.58m last week. Meanwhile, the US government trimmed oil production estimates for the first time in six months.

The swinging Greenback may have played a role in oil’s struggle to rally on Tuesday. Furthermore, fears about global growth slowing could be weighing on crude oil prices as it may reduce the demand for it. This was underpinned after UK Prime Minister’s revised Brexit deal was rejected in Parliament, increasing the odds of a ‘no-deal’ EU-UK divorce. This would in turn put downward pressure on the cycle-sensitive commodity.

Gold prices are attempting to reverse the near-term downtrend from the middle of February which was initiated by a bearish Evening Star candlestick pattern. A close under falling resistance (pink line on the immediate chart below), opens the door to testing 1321.37. Otherwise, resuming losses has 1285.13 – 1276.93 eyed as support. 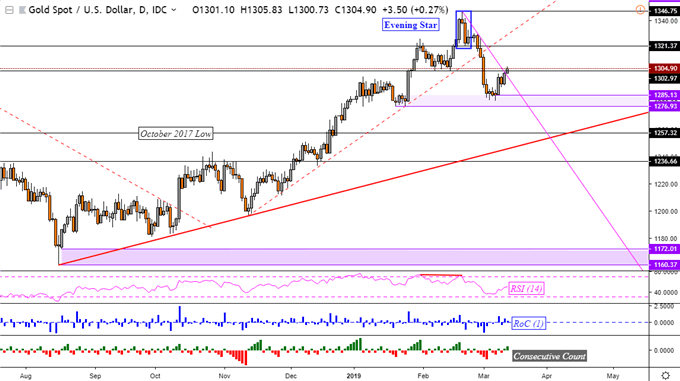 Crude oil prices may soon be turning lower as upside momentum is fading. That is represented via negative RSI divergence on the chart below. In addition, the rising trend line from the beginning of this year appears to have been slowly taken out. Near-term support is a range between 55.35 – 54.55. Resistance is just above between 57.34 and 57.93. 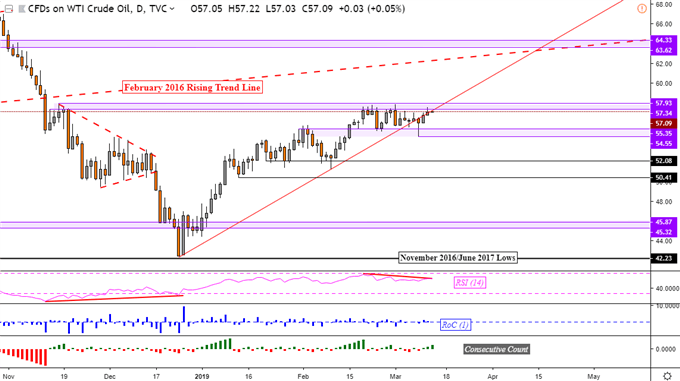