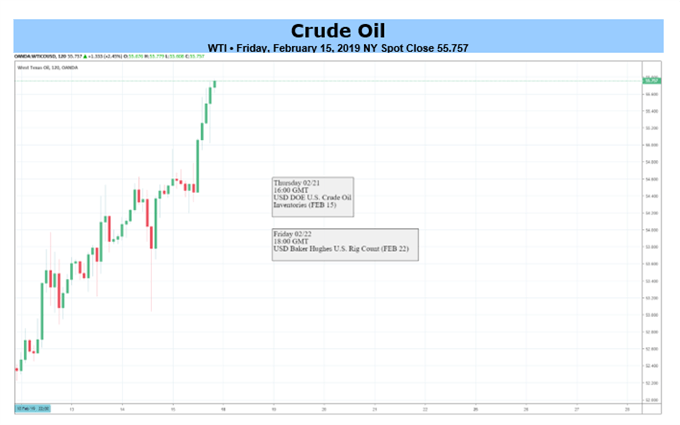 Crude remains bid despite an unexpected jump in U.S. inventories, and oil prices may trade higher over the coming days as the Organization of the Petroleum Exporting Countries (OPEC) and its allies continue to regulate the energy market, while the Relative Strength Index (RSI) sits in overbought territory for the first time in 2019.

Current market conditions may keep oil prices afloat ahead of OPEC’s Joint Ministerial Monitory Committee (JMMC) meeting on May 19 as Secretary General Mohammad Barkindoinsists that the ‘Declaration of Cooperation’ has helped to ‘return balance to the market and reintroduced a long-absent element of stability.’

The comments suggest OPEC and its allies are in no rush to boost production even though U.S. Crude Inventories jumped 7,238K in the week ending March 29, and the group may curb oil output beyond the June deadline as the updates from the U.S. Energy Information Administration (EIA) show weekly field production of crude oil climbing to a fresh record of 12,200K b/d during the same period.

However, recent comments coming out of Russia suggest the region is reluctant to extend the OPEC+ alliance as Energy Minister Alexander Novak argues that ‘it’s tooearly to say whether the deal will be extended,’ and U.S. President Donald Trump may continue to respond to rising energy prices as he tweets ‘world markets are fragile, price of oil getting too high.’

It remains to be seen if the U.S. and China, the two largest consumers of oil, will reach a trade deal over the coming days as President Trump insists that ‘the China and USMCA deals are moving along nicely,’ and OPEC and its allies may find it increasingly difficult to defend the extraordinary efforts aimed at rebalancing the energy market as the most recent Monthly Oil Market Report (MOMR) notes that ‘world oil demand is forecast to grow by 1.24 mb/d, unchanged from last month’s projections.’

With that said, oil prices may trade to fresh yearly highs as crude continues to track the upward trending channel from late-2018, and the bullish momentum appears to be gathering pace as the Relative Strength Index (RSI) highlights similar dynamic, with the oscillator sitting in overbought territory for the first time in 2019. Sign up and join DailyFX Currency Analyst David Song LIVE for an opportunity to discuss potential trade setups. 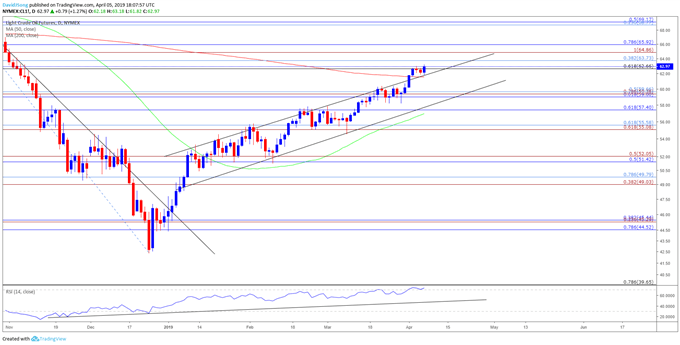 Looking for a technical perspective on oil? Check out the Weekly Oil Technical Forecast.

Will keep a close eye on the RSI as it sits in overbought territory for the first time in 2019, but may see a textbook sell-signal emerge should the oscillator fall below 70, which may spur a move back towards the $59.00 (61.8% retracement) to $59.70 (50% retracement) area.