Crude oil prices spent most of last week consolidating between a narrow range. The sentiment-linked commodity followed a similar performance on Wall Street where the S&P 500 also appeared to stall in its dominant uptrend since late December. The rather tepid performance in both of them, especially before the Good Friday holiday, reflected a mixed start to US earnings as the health-care sector dragged down stocks.

Efforts from the Organization of the Petroleum Exporting Countries (OPEC) continues to support the commodity on the sidelines. Saudi Arabia output, a key member, declined to 10.14m barrels per day (b/d) in February as petroleum exports softened to 6.98m b/d. On the chart below, I have created a visualization of oil’s rise alongside the S&P 500 and declines in OPEC production. 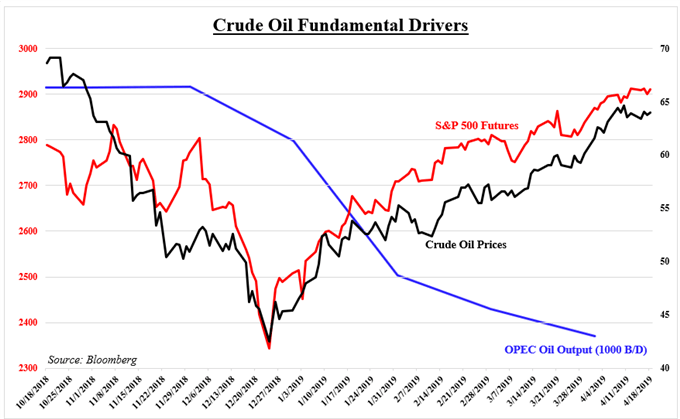 With that in mind, crude oil prices will be looking to either extend their dominant downtrend or risk stalling in the near-term. Fundamentals that are weighing against the commodity include solid US production and concerns that major central banks have brought about the global growth outlook. Better-than-expected Chinese first quarter GDP failed to inspire much market confidence last week.

This is a little concerning as the world’s second-largest economy is a major consumer of petroleum. The week ahead holds the Annual Energy Security Conference in Washington DC on Wednesday. The panel is expected to focus on evolving geopolitical realities and trade relationships between the US and the world. Concerns may be brought about global growth despite US-China trade talks progressing.

Speaking of trade, Japan’s Prime Minister Shinzo Abe will visit the White House for talks with US President Donald Trump. At the same time, Mr Trump seems to be eager to bring up tariff threats against the European Union, risking another front on the trade war. If talks between the US and Japan head in a similar direction, that could bode ill for oil. Japan’s Economy Minister noted the importance of an early accord.

Other items on the docket for oil prices include the ongoing US earnings season. Next week contains those from Chevron and Exxon Mobil, important parts of the energy sector. Do also keep an eye on the weekly official DOE inventory figures and how those compare to API estimates. US first quarter GDP is also a big item, especially for risk trends and the sentiment-linked commodity.