There are officially 30 days until March 29 – the Brexit deadline for when the United Kingdom is scheduled to separate from the European Union. That’s exactly the number of days set on the standard 1-month (1M) options contract.

Consequently, one would presume that implied volatility – the implicit variable in the Black Scholes pricing model that represents hedging costs – on the 1M Sterling option contracts should begin to tick higher. According to GBPUSD option data pulled from Bloomberg, however, that is not the case. 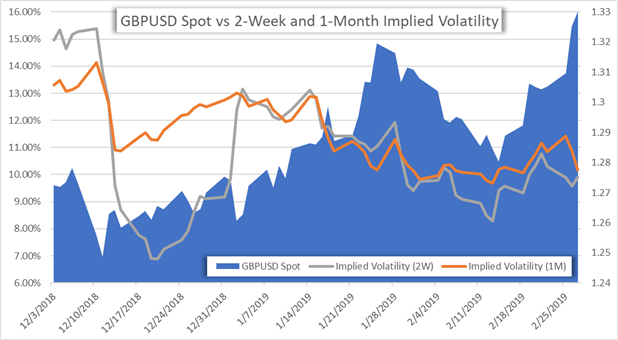 In fact, 1M implied volatility for the currency pair has dropped from 11.4 percent to 10.2 percent since Monday. This is likely due to forex market participants repositioning to account for increased odds that the official March 29 Brexit date will get pushed back.

New to trading Forex? Check out the Free DailyFX Education Center for more information on Currency Forecasts and Trading Guides.

The likelihood that the UK departs from the EU on March 29 decreased after MP’s approved Amendment F earlier today 502-20. The amendment effectively states that British Parliament rejects no-deal Brexit and requires the House of Commons to put forward a motion to extend Article 50 on March 14 if the PM’s renegotiated deal is not approved by March 12.

The pattern is the same for 1-week (1W) implied volatility. This indicates that forex markets are betting that most GBP price action in response to Brexit developments will occur before March 14. 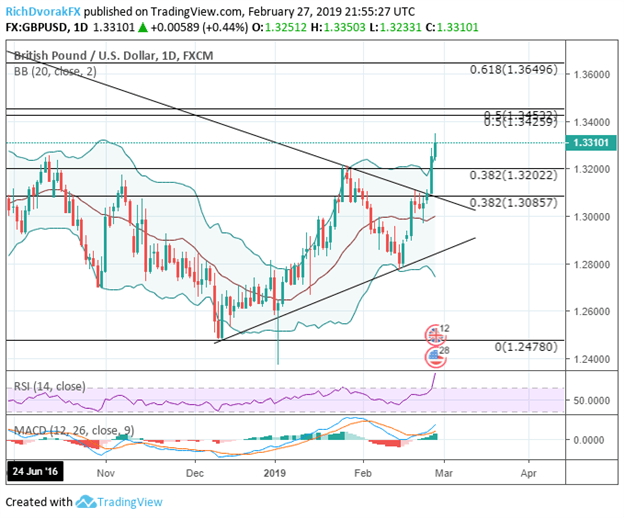 As for technicals, the Pound has jumped to its highest level since July of last year in response to dwindling odds of a hard, no-deal Brexit. This has caused the RSI to skyrocket well into overbought territory with the GBPUSD breaking out to the upside above medium-term downtrend resistance and Fibonacci retracement levels.

In the short term, however, the currency pair’s recent ascent could stabilize and send prices back towards the 1.32-1.31 handles near support at the 0.382 Fibs as March 12 approaches.