The ASX 200 shows tentative signs of exhaustion on its daily chart as a new week gets under way and so the next few sessions could prove to be most instructive.

The Sydney blue-chip benchmark crept below the well-respected uptrend channel which has marked the ascent from the lows of December on a daily closing basis last week for the first time ever. This is not yet a major setback for the bulls, however, as, given the length and strength of the rise, some consolidation was probably in order. 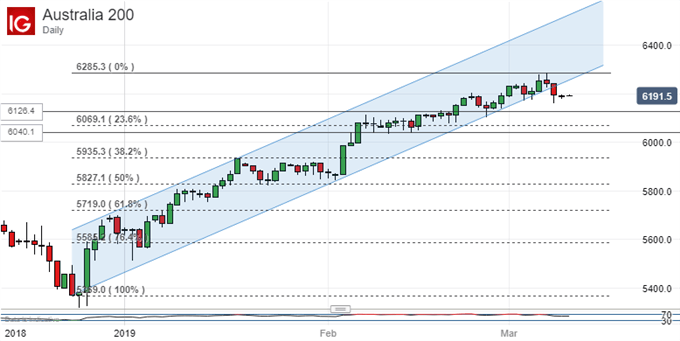 However, the magnitude of any immediate retracement will probably be a key directional clue. If falls can be limited to a support zone near at hand between 6126 and 6040 then they will probably seen as a healthy pullback in an overbought market and, conceivably, a platform for further gains.

That trading band held the index between February 6 and 20 last year. Although that period was marked by the small daily ranges which can indicate a degree of indecision, it also encompasses the 6069 point which is the first, 23.6% Fibonacci retracement of the rise up from those December lows to 2019’s peak- 6285.3.

If that gives way on a daily or weekly close, then things could be getting more serious for the bulls. The next retracement level comes in at 5935.3 but, given the crucial psychological importance of the 6000 level to this index, the surrendering of that point could see 50% retracement at 5827 come into rapid focus.

The ASX is also showing some signs of topping out on its monthly chart, with the clear risk of a lower low being made below last August’s peak. This will also bear watching. 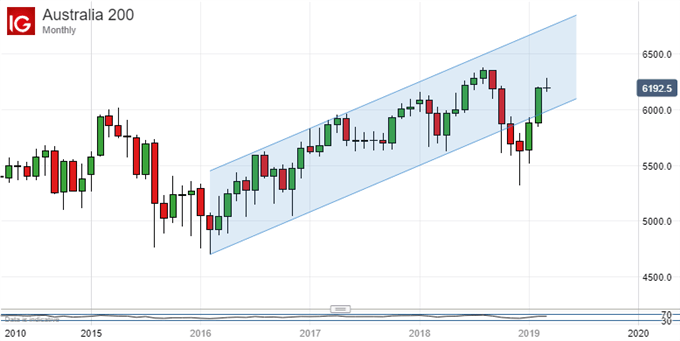