Fresh quarterly forecasts are out, to see where our team of analysts see the Euro, DAX, and other markets are headed in the coming weeks, check out the DailyFX Q2 Trading Forecasts.

Last week, the focus was on the way momentum had slowed to a crawl in major European indices, with the DAX possibly having one more small move higher before hitting resistance. On Friday, price moved up to the September swing-high and closed not far of the session’s best levels.

Over the weekend with Trade Wars between the U.S. and China flaring up again markets are going into ‘risk-off’ mode as a response. Whether it was this catalyst or another, global stock markets (as we looked at with regard to the U.S. on Friday) looked poised for a set-back.

The first meaningful level to watch as support is a swing-high from a month ago at 12029, followed up by the trend-line from the December low. There is a sizable gap-fill down to 11754 to pay attention to should selling accelerate towards the trend-line.

In the very near-term we may see an attempt to fill today’s gap, but efforts could quickly fail as this may be the break-away surprise gap that will take some time to repair. With that in mind, running with a short trading bias looks to be the way to go for now given the recently extended nature of the market and sudden break.

DAX Daily Chart (may be break-away gap from high) 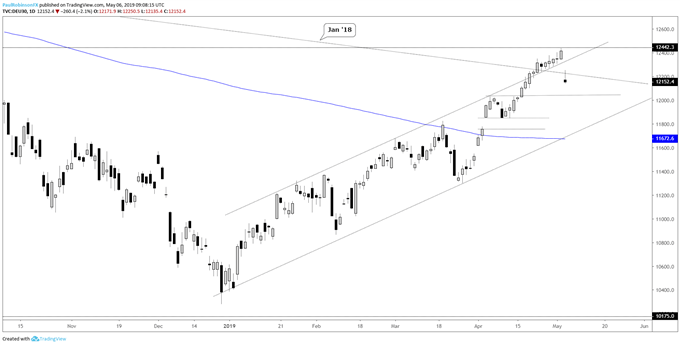 The CAC is in an even more precarious position than the DAX, with it having not only shown more relative weakness lately, but also gapping below the trend-line off the December low. The CAC is already near a gap fill down to 5423, with another gap to watch down to 5350 to keep an eye on. There aren’t any significant swing-low levels until just above 5200 where the 200-day lies just below by a few points.

Want to learn more about trading the DAX? Check out ‘How to Trade the DAX’, and join me weekly for technical updates in the Indices and Commodities webinar.