Vulnerability in equities echoed from Wall Street into Asia Pacific benchmark stock indexes amidst rising concerns about the global outlook. Fears about an EU-US trade war and worries from the International Monetary Fund put an end to the best winning streak in the S&P 500 since October.

In Japan, the Nikkei 225 aimed 0.62% lower heading into Tokyo Stock Exchange close. Shares in Beijing didn’t fare much better with the Shanghai Composite down about 0.4%. Australia’s ASX 200 was little changed from Tuesday.

That may have been due to increasing speculation that the RBA might turn more dovish as Australian front-end government bond yields declined. But this was cooled after the central bank’s Deputy Governor, Guy Debelle, hinted that they remain in a wait-and-see mode. That likely disappointed rate cut bets.

One would anticipate the anti-risk Japanese Yen to perform well in these circumstances, but that was not the case. It traded mixed as the Nikkei 225, after gapping considerably lower on Wednesday, attempted to trim some of its losses. AUD/USD soared after Mr. Debelle cooled RBA rate cut bets.

The remaining 24 hours contains plenty of economic event risk. First, the ECB may add to their concerns about growth from March’s dovish interest rate decision. A similar tone may then be struck from the FOMC meeting minutes. Increased rate cut bets need not necessarily lift equities if it underpins global growth fears.

The DAX 30 extended its decline from Monday after a bearish reversal pattern appeared at its recent top, as anticipated. As such, it is another step closer towards confirming a turn lower that may be the defining trend in the medium-term. For now, watch for a daily close under 11838 which may offer said confirmation. Otherwise turning higher places 12053 as near-term resistance. 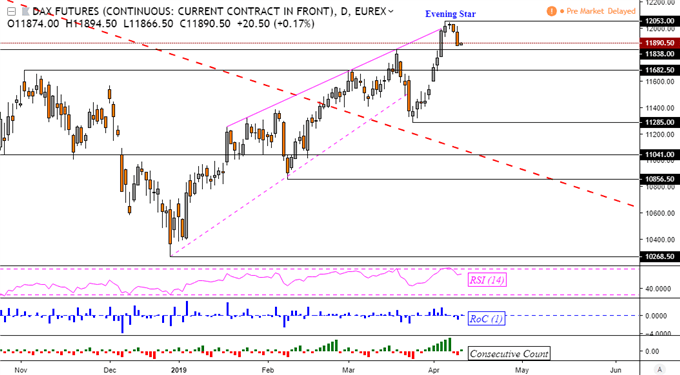