It was a shaky week for US Dollar bulls as the Greenback underperformed largely because of two key fundamental developments. The first being rising chances of a Fed rate cut in July, those odds nearly doubled this past week and undermined the return of USD. Second, this fueled a recovery in the S&P 500 and risk trends, sapping the appeal of safe-haven assets such as the world’s most liquid currency, USD.

One could imagine that this bolstered its ASEAN counterparts, and this was largely the case. The one notable exception was the Indonesian Rupiah, which saw restricted trade due to a week’s worth of local holidays. Still, this didn’t prevent the Bank of Indonesia from opening the door to a rate cut down the road if the nation faces a negative impact from trade wars. The central bank held rates unchanged back in May. 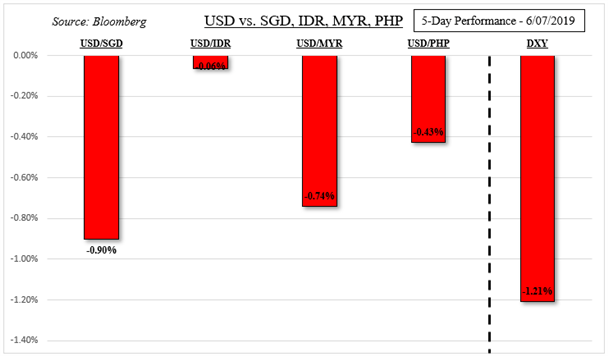 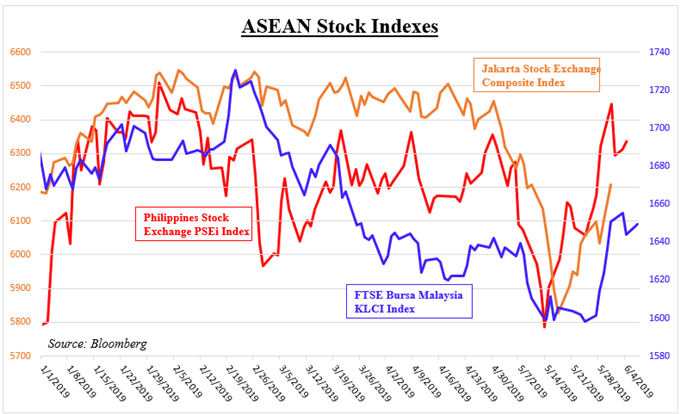 The impact of where credit conditions are heading in the world’s largest economy should not be brushed aside for regional ASEAN markets. Given such certainty of a cut in July and the Fed’s data-dependent approach, the focus continues to be on how the US economy performs. As we saw with the latest jobs report, US economic data is still tending to increasingly disappoint relative to expectations.

This opens the door to further weakness in US CPI data in the week ahead, which could potentially seal the nail in the coffin for a July cut in terms of what the markets could expect. Then, retail sales will be closely eyed for the health of the largest portion of US GDP, consumption. With room to cut, this may undermine the appeal of the US Dollar and aid to speed up the reversal in USDSGD.

Granted, odds of a cut have been rising also due to the reaction the Fed could take to rising trade war fears. This has been somewhat relieved after US President Donald Trump indefinitely suspended Mexico tariff threats. As such, this could support USD as Fed rate cut bets cool. The US still has to make a call on whether or not to raise levies on China on an additional $325b worth of goods towards the end of this month.

China is also facing a similar threat. After the Fed Chair spoke this past week, PBOC Governor Yi Gang also offered reassuring commentary that the nation has “lots of policy room” if trade wars worsen. China will be releasing trade, industrial production and retail sales this week. Like in the US, these may also be at risk to underperforming as markets gauge the impact of higher US tariffs.

As such, these high-profile event risk can heavily influence market mood and may overshadow regional developments in ASEAN such as Indonesian CPI and Philippine trade data. Though both will be important to watch for near-term volatility in USDIDR and USDPHP. In the medium-term however, rising fears of a US recession can benefit the Greenback with a key section of the yield curve still inverted.