Like so many other benchmarks across the financial system, the US Dollar – the world’s most liquid currency – is struggling to find its bearings. There is plenty of price-based volatility and even a remarkably high instance of tentative breakouts. Yet, the oscillation in price action and nascent technical cues that would normally translate into a significant trend are consistently running into a wall holding back commitment. We can point to technical restrictions in relative levels for majors such as EURUSD, GBPUSD and USDJPY or fundamental hang ups such as the complicated implications of trade wars on risk trends, rate forecasts and economic disadvantage. However, I believe the hang up for the Greenback is likely a market-wide issue that is born of indecision across the investor landscape. In other words, I will be more confident that the Dollar will establish a trend when other markets – us equities, emerging markets, yields, etc – commit to their own.

Of course, high volatility and a lack of direction creates for difficult trading. One of the favorite approaches to the markets for the retail guild is to identify breakouts and project their intent to their furthest possible reach – even if that would defy probability. On the other hand, a commitment to congestion can offer a framework all its own. Range trading is typically more reliable when markets are acting as they have been lately. Yet, the ‘sanctity’ of trendlines and boundaries are not held as dear when volatility is as high as it has been. This can result in scenarios of false breakouts – exactly as we saw from the DXY on April 24th when it cleared range resistance at 97.75 only to put in a high the following day.

We have seen it trade back into congestion with the aforementioned ceiling offering no noticeable support on the way back down. Instead, we have a short-term wedge from the index with a floor that will soon coincide with the midpoint of the range established from the run between March 20th and April 25th at around 97.05. Resistance is chasing lower with 97.75 again ready to test its mettle. Keep tabs on these levels, but don’t presume any breaks will open the door to unchecked momentum. 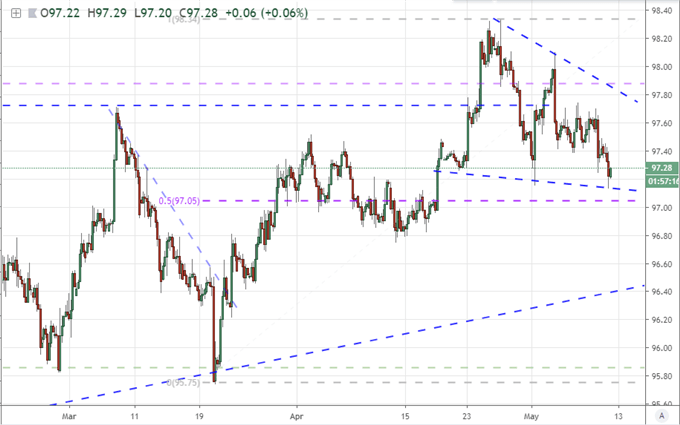 From the four-hour chart to a much higher time frame, we get a sense of the congestion that the Dollar continues to slog through. The 20-week average true range (ATR) on the DXY continues to collapse with the realized activity measure already plunging levels not seen since Fall 2014. It will be some time and a very unlikely deep freeze on financial markets before we slide below those record levels of inactivity. In the meantime, the larger technical patterns speak to the build up of opportunity that will otherwise take a long time to fully play out. If these patterns are taking months to setup, it is reasonable to assume it will take months to trigger. Then again, the ‘payoff’ of such a break could be long served and cover remarkable ground. 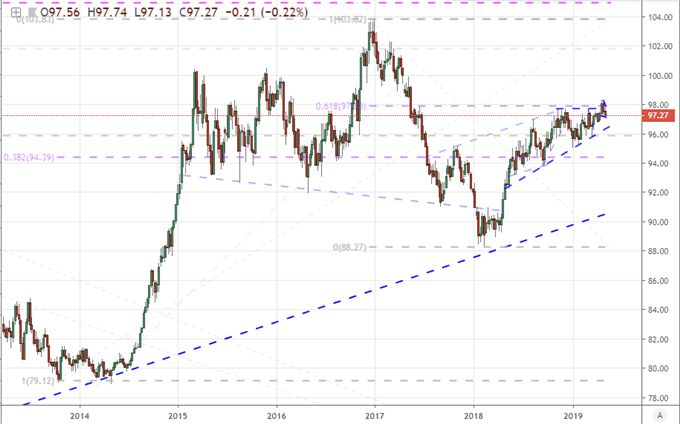 As a traditional safe haven currency and a the most heavily traded unit in the FX market, it is important to follow volatility if you intend to gain a bead on the Dollar. Measures of expected (‘implied’) volatility for the currency market are as remarkably misleading as those we see in other asset classes. In the aggregate FX volatility measure below – combining the CME’s read for Euro, Pound and Yen-based majors – we see activity is slowly coming up from the post Brexit deflation (after the UK was given an extension) low. Even if we did have a more reliable course for these activity measures, it likely wouldn’t align to the Dollar particularly well. The Greenback’s safe haven status will not return in a decisive way until we hit a more severe level of risk aversion. A deep an reliable measure of ‘risk on’ will not likely return for some time. 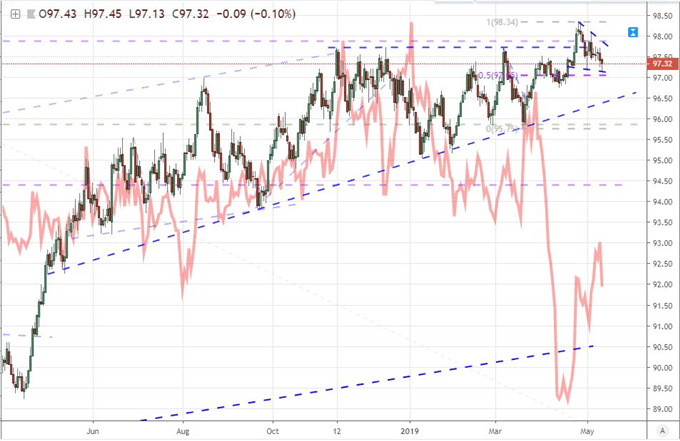 Another chart that traders have misplaced their expectations – whether they recognize it as a fundamental connection or not – is the increasingly divergent course between the currency and implied forecast for US-based rates. The forecast for US benchmark rates peaked and tumbled back from late October and never recovered in the opening quarter of the year alongside traditional risk assets. That has done little to stymie the Dollar – though perhaps the slide in expected returns helped to dampen any safe haven flows that were developing. Even when look to comparative measures of present returns in the market (say EURUSD versus the yield spread on US and EU swaps) we are met with the same divergence. 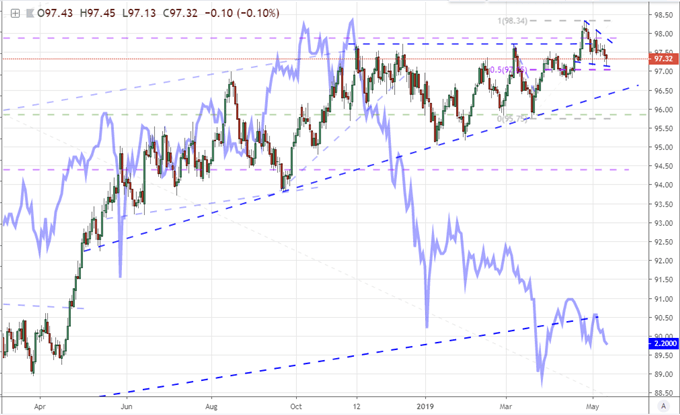 In looking through the Dollar-based pairs for unique technical pictures and opportunities, the EURUSD is not anywhere near the top of my list. It reflects the same general malaise that we find from DXY – no surprise as the pair is the primary component of the index. There is an unmistakable bear trend with a channel resistance currently at 1.1300 and a clear effort to ignore any importance previously given to 1.1200. The pair’s oscillations between the channel bounds are slow and erratic. In contrast, USDJPY has long deviated from the norm and now that is producing a unique perspective where it is actually showing deference for its own technicals. Through the end of this past week, the market held 109.65 support which has offered a short-term range low and the midpoint between October’s high and January’s flash crash low. Will it break to project towards 108 or will the market make a range out of the setup with a cap up around 112.20? Keep an eye on it. 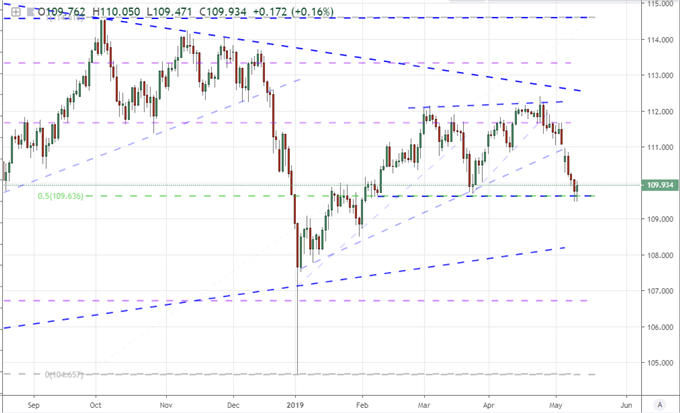 Another atypical Dollar-based major that is higher on my list for its respect for technical levels and an ability to distance from fundamental anchors is USDCHF. The pair has established an expanding wedge around 1.02 after a failed breakout back in mid-April. We are starting to see traction form in the reversal and the 1.1000 level offer some measure of ‘former resistance as new support’. The more significant support however is the large wedge floor starting back in the beginning of 2018 which now falls around 0.9900. 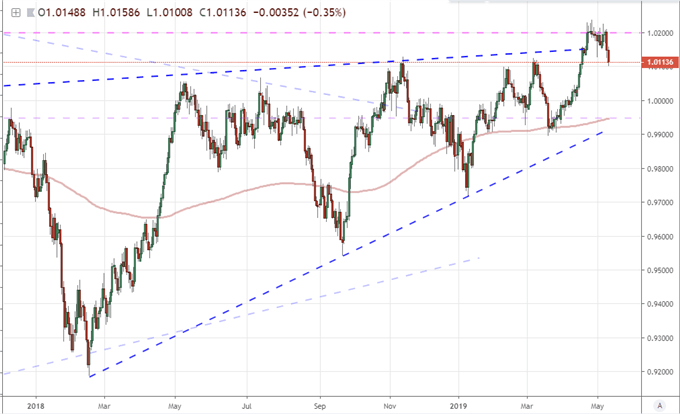 For speculative positioning, the market’s view of the Dollar’s next steps are as uncertain as the price action itself. From the larger speculative futures traders, net positioning through the COT (Commitment of Traders) report find a general long bias but with an unmistakable resistance to momentum behind build up or de-levering. From the smaller and more agile retail group, positioning in EURUSD is approximately neutral – with 51% of traders long. Yet, the same contrast in technical acuity between that benchmark and USDJPY finds speculative imbalance in the exposure numbers. Retail traders are showing the strongest long-bias for the pair since the flash-crash low on the USDJPY back in early January. 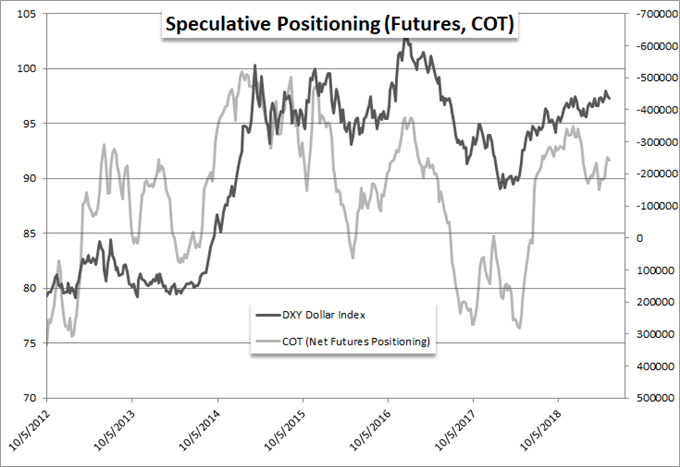 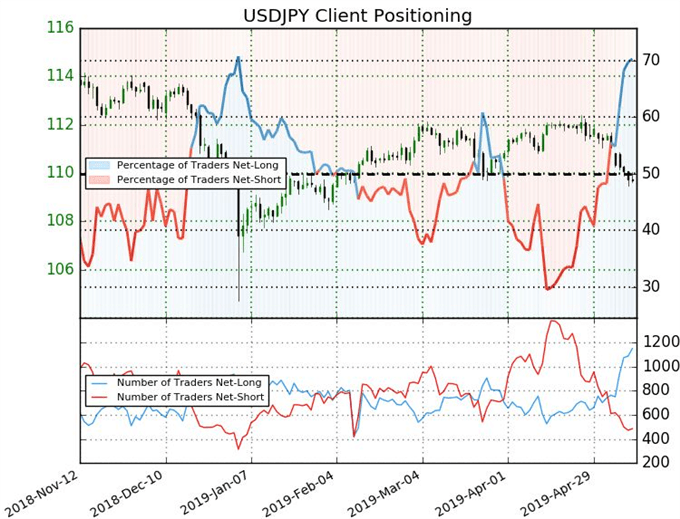