Do you trade on fundamental themes or event risk? See what live events we will cover on DailyFX in the week ahead (including Eurozone GDP, the Fed and BOE rate decisions) as well as our regular webinar series meant to help you hone your trading.

While much of the fundamental attention this past week was paid to specific event risk or surprise headlines, the real influence was to be found in underlying themes. The US corporate earnings season hit full stride this past week, with some of the largest companies updating investors on their performance while certain groupings would inadvertently provide update on critical systemic themes: trade wars, growth, monetary policy, etc. What is unmistakable in the assessment of risk trends across regions and asset classes is that US indices continue to outperform most of their top liquidity counterparts. That trend continued through this past week as the ‘rest of world equities’ segment (I use VEU) struggled and emerging market assets wavered while the S&P 500 and Nasdaq 100 closed at record highs. There are moves that are leading and those that deviate – the former insinuates that the rest of the market will eventually catch up and the latter typically finds the outperformer collapse as the systemic reality kicks in. What is remarkable is that US equities as an asset class did not uniformly climb this past week – there was a distinct drive from the tech sector, which was made clear in very different pace between the Nasdaq and Dow. Despite this existing advantage, however, the strong after-hours numbers from Microsoft (Wednesday evening) and Amazon (Thursday evening) did not translate into strong extension for the Nasdaq. That said, the key listings for the week ahead will struggle to overcome the inertia. Google and Apple will report on the tech side while General Motors, General Electric and Pfizer will touch upon different – but just as restricted – trends. 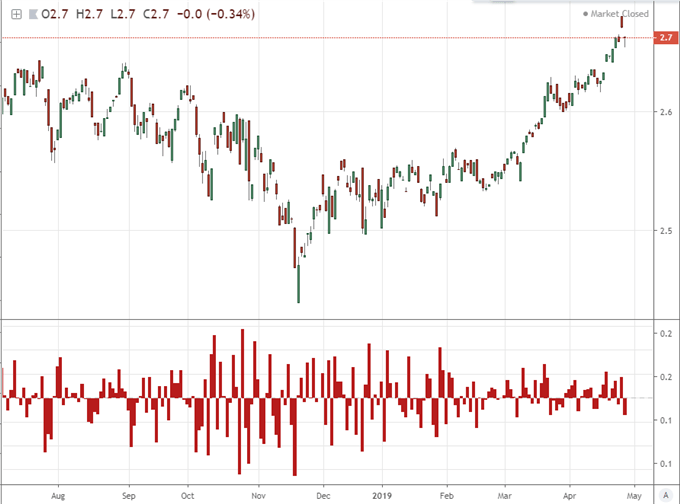 When considering other systemic motivators through the coming week, we will touch upon the gamut of familiar drivers. Trade wars are another tide that is still high on the fundamental horizon. Japan’s Prime Minister and Finance Minister traveled to Europe and North American this past week in advance of the G20 summit the country will host in late July. Trade was on the agenda, but progress seemed generally symbolic. An interesting note was made to suggest discussions should not include the currency (Yen) which is ironic considering Japan has targeted exchange rates before and President Trump has increased the frequency with which he has weighed in on the Dollar. The sentiment surrounding US-Chinese relationships is unclear so the market is defaulting to skepticism; and here too, the question of exchange rates is being broached. My real concern in this vein is with the constant threats being made by the Trump administration against European interests – both direct and indirect. Another theme to keep track of moving forward is monetary policy. This is not an active catalyst itself so much as a point of acceleration. Should the market be sent into a tailspin whereby the world’s largest central banks are forced to fight another financial fire, we will quickly find their ability to avert crises is all but lost. The real impact from monetary policy comes through its implications through growth – which is more appropriately described as the fear of a stalled global economy or even outright recession. The US and Chinese 1Q GDP figures managed to beat expectations, but concern for the future seems to have eased little. 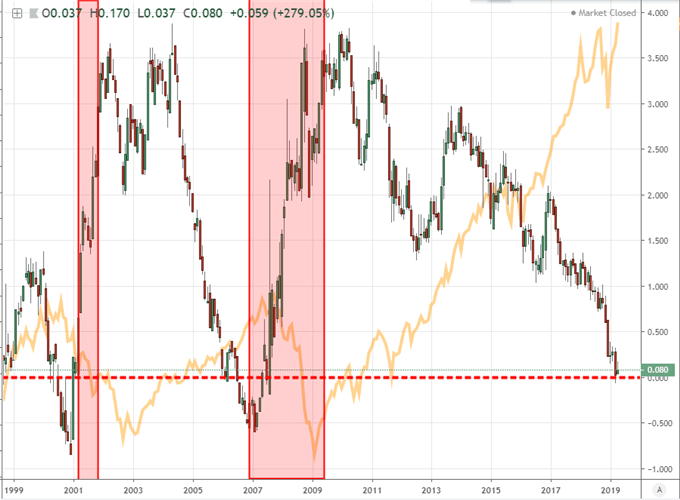 The Dollar Will be Burdened by a Dense Economic Calendar

Transitioning to the new trading week, the Dollar remains the ‘major’ sporting the greatest fundamental pressure. Whether we look to the trade-weighted DXY Index, my own equally-weighted measure or simply the key EURUSD pair; we come to the same conclusion: the Greenback earned an impressive bullish break this past week. The neartwo–year highs draws considerable speculative appetite all on its own, but we have seen many technical breaks flounder soon after liftoff. It should come as no surprise then that there is remarkable reticence surrounding the Dollar’s achievements through the close of this past week. In fact, the reports that the US economy had grown 3.2 percent on an annualized basis through the first quarter – handily besting forecasts – realized an actual slip from the Dollar. There are questionable details to the headline reading like the large contribution from temporary factors (1.7 percentage points from net exports and inventories) and the slowdown in consumer spending with only a 0.8 percent increase. That said, I think the market simply isn’t able to leverage anything more from the growth theme. In the week ahead, we will tap into multiple aspects of the Greenback’s role through event risk like the Fed’s favorite inflation statistics (PCE deflator), an important consumer confidence update, an advance traded reading and the ever-popular monthly NFPs. The top listing, however, will be the FOMC rate decision on Wednesday. The group will not change its actual policy settings, but the market is tuned in as the group has throttled back from steady hikes owing heavily to a lowered growth forecast. Well, the 1Q GDP figure seems to call that reasoning into question. 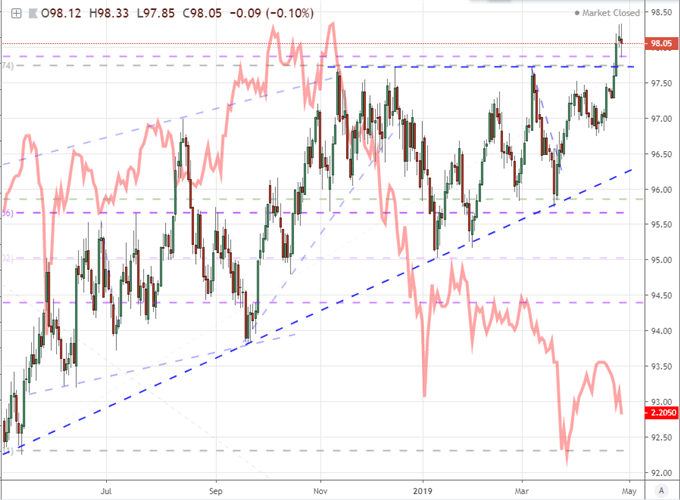 Rate decision and growth update considered, one of the most productive drivers for the Dollar has arguably been the trouble suffered by the benchmark’s most liquid counterparts. The Yen has struggled in the face of risk trends owing to the carry trade appeal the market builds upon. That has settled this past week. The Sterling is embroiled in Brexit first and foremost, but we are not to expect any serious progression points on this theme until the government/Parliament announce critical breakthroughs. We should remember that as we wade into the Bank of England’s (BOE’s) Super Thursday. This particular update includes a rate decision, Governor Carney presser and the Quarterly Inflation report. That said, what the central bank does will be determined by Brexit, not the other way around. Perhaps one of the most critical fundamental stories in its own right – but also an indirect Dollar motivator – will be the Euro’s economic docket. Through Sunday, Spain will be at the polls and another country will vote on just how in sync it intends to be with the European Union. The more probable impact comes through the 1Q GDP run on the calendar. There are a number of countries due to update growth, but I will watch the Eurozone and Italian figures the closest.

Beware the Japanese Yen, Oil Is Unlikely to be Active Despite its Threats

Looking out over the horizon next week, we are likely to draw a lot of our market’s intent from what is scheduled specifically on the US docket or what shows up in the region’s headlines. That said, there are other systemic themes that we should be mindful of in the event that conditions can leverage a speculative response. One of the most interesting environmental distortions ahead comes through the Japanese markets. The world’s third largest economy is due to be offline for the entire week for the Golden Week holiday. Yet, due to certain circumstances, the holiday conditions will extend even further to include the longest period of drift that we have seen from the country since World War II. Normally, traders would assume this gives license to simply ignore the Japanese Yen and related assets because the primary market for liquidity will be absent. However, the volatility from January 3rd should serve as a reminder that market distortions can lead to unexpected and severe movements. At the beginning of the year, the Yen (along with the Aussie, Kiwi and a few others) experienced a flash crash that was spurred in large part by the thin liquidity. We could reasonably risk the same in the week ahead if any number of probable events were to ignite the fire. It should be said that these developments are not readily tradeable as they are unpredictable and execution unreliable given how thin conditions are. 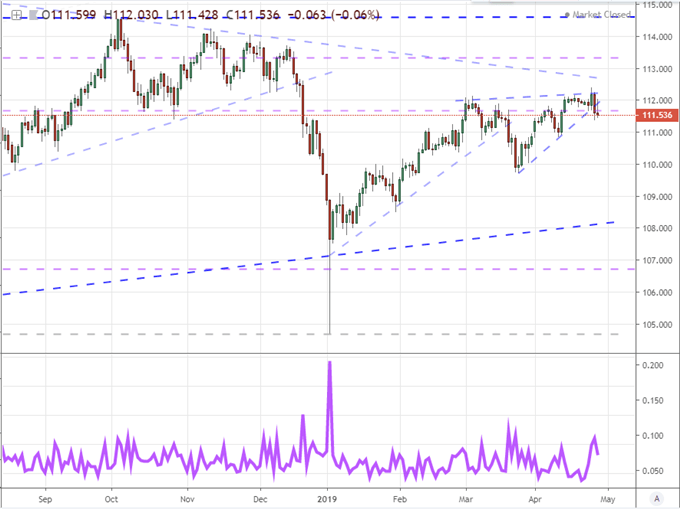 Another market to keep tabs on through the coming week is commodities. Gold is a class unto itself as the precious metal serves as a measure of how unnerved investors are over risk assets and how unstable the future looks against the fundamental stresses that we are facing. The rebound this past week certainly should raise some eyebrows given the sense of risk appetite we default to through baselines like US indices. Yet, my interest in the physicals market skews more towards those products that associate to risk trends and growth forecast. There is no more tied-in asset than crude oil, and it took an unmistakable dive this past week. The tumble below $65 came despite the impressive US GDP figure that crossed the wires. That is troubling, even if there was a competitive fundamental wind. That weather pattern was US President Donald Trump who remarked that he had talked to OPEC members to encourage them to lower the cost of the raw material so that the savings could roll into further refined products (gasoline). That said, the President has made these efforts multiple times before and most occasions failed by the following day. Will this prove any different? This likely has far more today with the contributions from risk trends and global growth than what President Trump is able to affect. We discuss all of this and more in this weekend Trading Video.

Chart of US Oil and 1-Day Rate of Change (Daily) 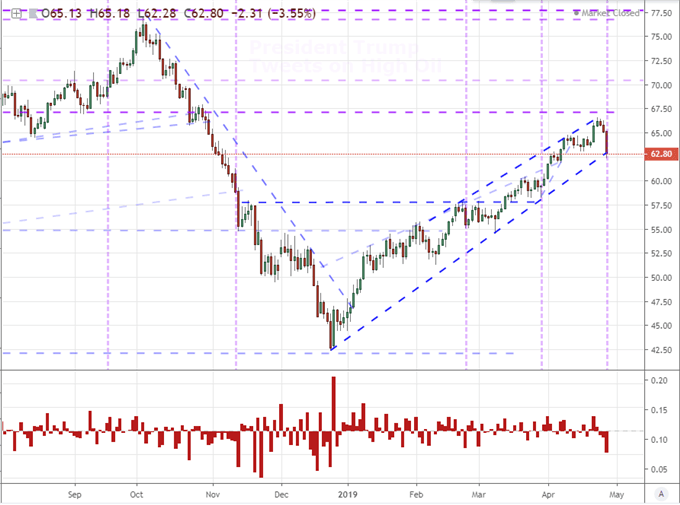