Risk Trends Remain Uneven as Optimism is Speculative and Theoretical

Once again, if we were marking our assessment of market health by the benchmark US indices – reflecting the world’s most popular assets in the largest economy – it would seem we were on the cusp of returning to a self-sustaining optimism. Yet, actual sentiment fails to reflect that borderline enthusiasm as systemic risks persist and most other speculative assets flounder from deeper discounts. While most major US indices have performed well through this past session, the S&P 500 and Dow continue to play the idyllic leaders. Having retaken the ‘neckline’ of their respective head-and-shoulders patterns earlier this week, the indices effectively curbed a cascade in speculative stability which could turn break to trend to crisis with the proper motivation. That said, reversing a technical breakdown is not the same thing as reversing a trend to sustained momentum. Far from it. Is it reasonable with the fundamental backdrop and the contrast of global counterparts to assume the Dow can return to record highs? Against such odds could a new bull persist to forge new record highs? 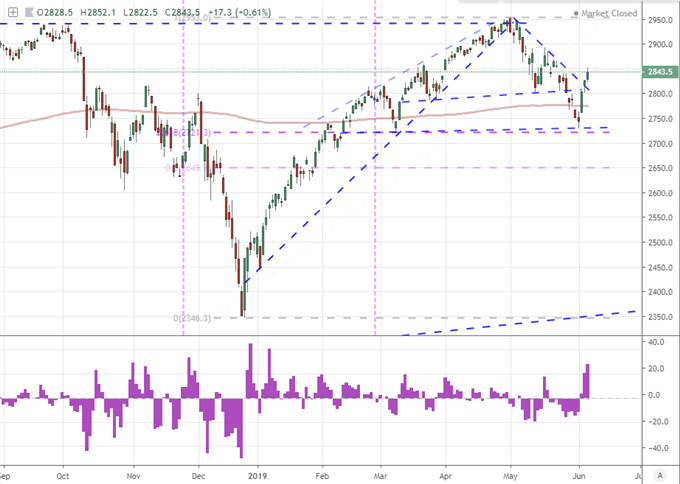 One critical point for skepticism for the momentum in US equities – much less systemic risk appetite – is the unrelenting struggle for so many other assets that have rooting in speculative interest. As close a cousin to the S&P 500 in the risk spectrum as we can reasonably come, the VEU rest of world ETF showed none of the effort its US counterpart has made recently and a severely restricted reference to the charge since the regional measure made since the beginning of the year. Emerging markets attached to trade wars notably refused to conform but there was some modest appeal in high-yield bond yields perhaps suggesting US-centric appetites. When the growth-sentiment combination was scrutinized more closely, commodities firmed modestly (the USCI edged up from a series low); but the aggregate of global bond yields pushed to a fresh multi-year low. This is hardly a roaring endorsement of ‘risk on’ heading into the twilight hour of trade this week. 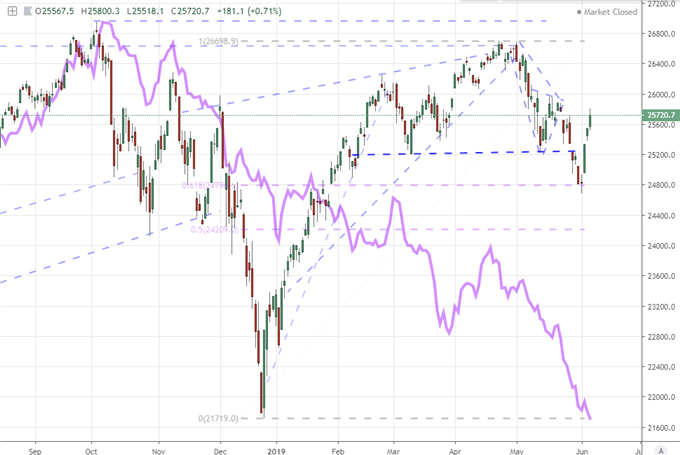 To set the markets to a true bullish or bear trend, we need a fundamental theme by which market participants can agree to set their conviction. The most promising fuel for resurgent speculation would be monetary policy. There is little missing the dovish shift from the world’s largest central banks, but their progress has been relatively modest and questions of effectiveness are raised at each step. The RBA’s cut earlier this week was proven unique as the ECB decision this past session curbed expectations that all the major players were committed to get ahead of the curve while upgraded forecasts registered as dubious optimism. From trade wars, there have been reports that discussions between the US and Mexico were registering progress, but at the end of the day, President Trump said he still intended to move forward with the 5 percent blanket tariff on Monday. For the China relationship, the White House said a decision on $300 billion more in Chinese imports would be made after the G20 summit. As for the outlook for economic activity, there is little basis for even speculative optimism. 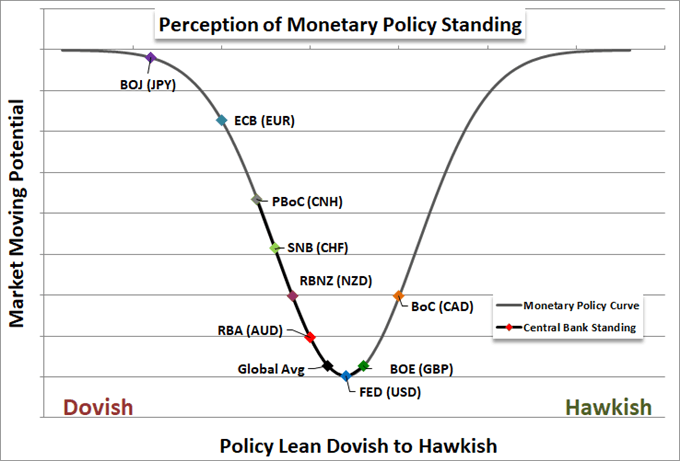 Looking ahead to the final trading day of the week and given the uneven backdrop for systemic issues, we likely face better potential for short-term volatility in very specific areas of the market. Event risk better caters to reliable shocks of price action versus unreliable updates to open-ended themes. If I were to isolate one currency with the potential of confluence between fundamentals, technicals and market conditions, it would be the US Dollar. Despite what the Dow may suggest, congestion tinged with skepticism is the baseline setting for the markets. From a chart perspective, the DXY Index made a very conspicuous hold at channel support this past session. The gradual bullish trend (backed by a 50% Fib and 200-day moving average) is the type of pattern that would take a serious conviction to override. On the fundamental side, the top event risk on the global calendar is clearly associated to the Greenback. The May NFPs are scheduled for their typical 12:30 GMT Friday release. The wages component has recently taken the most prominent position in the run of labor data owing to its inflationary implications for Fed policy decisions. However, after the dramatic miss in the ADP private payrolls (27,000 versus 187,000 expected) earlier this week, the headline figure is now set against a serious discount. 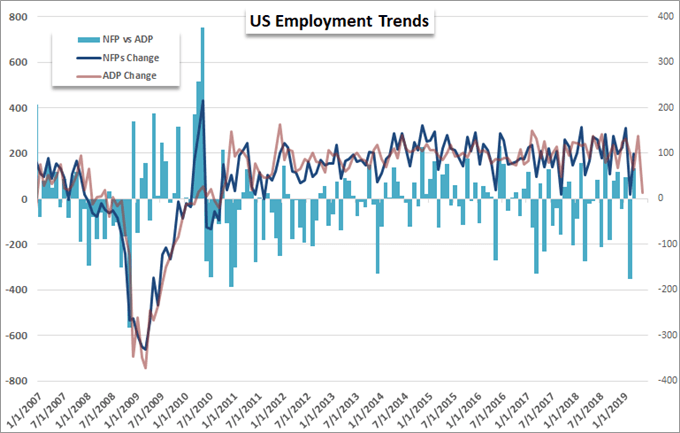 Among the other major currencies due updates through the financial session of the week, the Canadian Dollar could leverage the innate interest afforded to the US currency. Due for release at the same time as the NFPs, the Canadian employment report is also staged with expectations of a tepid figure for May. The 5,500 job cull projected by economists is a similar flavor to the post-ADP view of the US Dollar. That can complicate USDCAD, but it carries a similar discount for other Loonie crosses (CADCHF, EURCAD, AUDCAD, etc). Two other currencies on my radar that are less dependent on scheduled event risk are the Euro and Pound. In the case of the former, German trade and industrial production are economically important but not reliably market moving. The ECB rate decision this past session was a reminder of the extreme accommodation the central bank is making as well as the deflated impact of further efforts. From the Sterling’s perspective, Brexit is still an overriding issue, but we will not return to earnest UK-EU negotiations for some time. First, we need to establish the next leader of the conservative party and thereby the Prime Minister. That only starts next week. 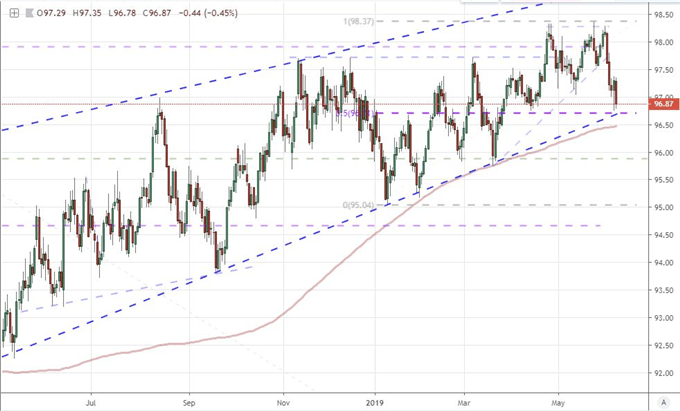 Gold as a Signal of Financial Concerns Beyond Simple Risk

Outside the unique pull of the major currencies, there is value in following those growth-dependent or similarly atypical assets that can provide unique signal on risk appetite. Global government bond yields are my preferred sanity check on the conviction behind sentiment. While central banks’ intent to cut benchmark rates may be strong, their capacity to lower the threshold is exceptionally low such that further cuts are construed as stronger indication of systemic problems than they are reassurance for short-term speculative fulfillment. As for crude oil – the fuel for global GDP – the commodity’s overdue bounce registered more as relief than a committed reversal in demand. The record-breaking swell in US inventories is a strong check to any supply-side ambitions crude traders may develop.

If there was one asset that I would refer to as a gauge of intensity for sentiment in the broader capital markets, it would be gold. The precious metal made a high-profile, intraday reversal Wednesday as speculative appetite firmed and a sense of stability return for the FX market. Yet, that sizable ‘wick’ – largest since April 2018 – didn’t prevent follow through in Thursday’s session. The metal would make a run to compete with Wednesday’s intraday high this past session, but on a close-over-close basis, the metal climbed for a seventh consecutive session – the longest climb since January 2018. The interest in this metal is very particular; and in these circumstances, very indicative. Rather than a traditional ‘haven’, gold plays the role of a financial harbor against devalued sovereign assets like government bonds. If the commodity $1,350 – and certainly $1,360 – market participants far and wide should take note. We discuss all of this and more in today’s Trading Video. 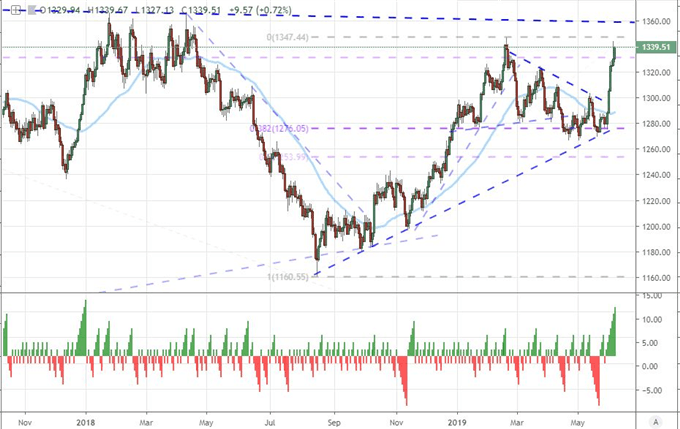