The Reserve Bank of Australia (RBA) meeting may keep AUD/USD under pressure if the central bank alters the forward-guidance for monetary policy.

Recent comments from Governor Philip Lowe suggest the RBA will adopt a more dovish tone in 2019 as ‘available data suggest that the underlying trend in consumption is softer than it earlier looked to be,’ and the central bank may show a greater willingness to further support the economy as the ‘progress towards our goals was expected to be only gradual.’ In turn, a batch of a dovish comments from Governor Lowe & Co. may trigger a bearish reaction in the AUD/USD exchange rate as it fuels bets for a rate-cut.

However, more of the same from the RBA may undermine the recent weakness in the Australian dollar especially if the central bank reiterates that ‘there was not a strong case for a near-term adjustment in monetary policy.’ Sign up and join DailyFX Currency Analyst David Song LIVE for an opportunity to discuss potential trade setups.

The Reserve Bank of Australia (RBA) kept the official cash rate (OCR) at the record-low of 1.50% after holding its first meeting for 2019, with the central bank largely sticking to the same script as ‘the Board judged that holding the stance of monetary policy unchanged at this meeting would be consistent with sustainable growth in the economy and achieving the inflation target over time.’

The remarks suggest the RBA is in no rush to alter the monetary policy outlook as ‘the low level of interest rates is continuing to support the Australian economy,’ and it seems as though the central bank will stick to the wait-and-see approach over the coming months ‘the central scenario is for the Australian economy to grow by around 3 per cent this year and by a little less in 2020 due to slower growth in exports of resources.’

Nevertheless, the lack of dovish comments generated a bullish reaction in the Australian dollar, with AUD/USD advancing from the 0.7200 handle to close the day at 0.7233. Learn more with the DailyFX Advanced Guide for Trading the News. 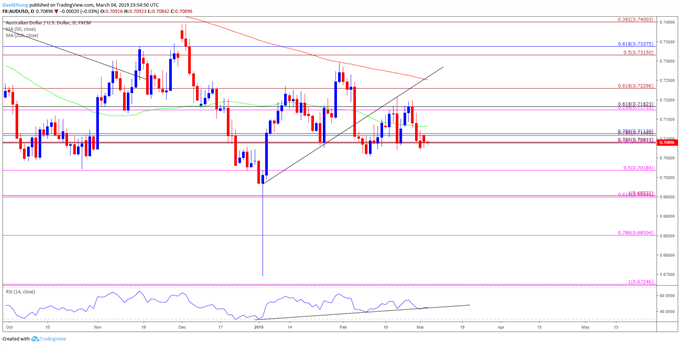