The short-term rebound in NZD/USD appears to be stalling ahead of the Reserve Bank of New Zealand’s (RBNZ) Financial Stability Report as the exchange rate struggles to extend the recent string of higher highs & lows.

The New Zealand Dollar attempts to retrace the decline following the RBNZ rate cut, but NZD/USD stands at risk of giving back the rebound from the monthly-low (0.6482) as the central bank endorses a ‘downward bias’ for the official cash rate (OCR).

The RBNZ may insist that ‘a lower path for the OCR over the projection period was appropriate’ amid the threat for below-target inflation, and the central bank may keep the door open to further insulate the economy as ‘a key downside risk relating to the growth projections was a larger than anticipated slowdown in global economic growth, particularly in China and Australia, New Zealand’s largest trading partners.’

In turn, dovish remarks coming out of the RBNZ may rattle the New Zealand Dollar, and the central bank may continue to strike a cautious tone ahead of the next meeting on June 25 as Governor Adrian Orr is scheduled to speak over the coming days.

With that said, the rebound in NZD/USD may prove to be short-lived, with the broader outlook tilted to the downside as both price and the Relative Strength Index (RSI) snap the upward trends carried over from 2018. 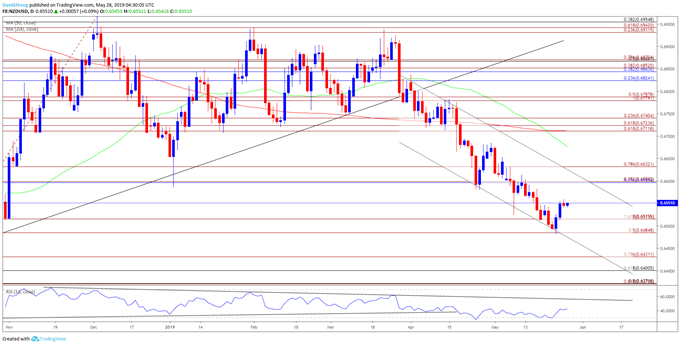