See how retail traders are positioned in Dow after today’s break, oil as it extends its climb above $61, EURUSD as it threatens to break 1.1200 along with the rest of the FX majors, indices and crude oil intraday usingthe DailyFX speculative positioning data on the sentiment page.

Speculative Resurgence to Record Highs or Temporary Break from Reality?

There was an unmistakable charge to speculative sentiment to start the new trading week – and it is worth noting April 1st would also mark the beginning of the month and second quarter. One of my favorite risk-leaning instruments, US indices, in particular gave a remarkable performance. The S&P 500 posted a strong bullish gap on the open and continued higher through the rest of the active session. The jump on the open though marked the fifth such instance of a bullish leap for the longest such series since November 7th. In pure technical terms, the Dow made a more striking picture with the break above wedge resistance. Both are teasing bullish interests to debate whether this will be the spark to return the markets to record highs. One factor in favor of those expectations is breadth. The strong performance was not isolated to a single favored asset class. The rest-of-world equities (VEU ETF) and emerging markets (EEM ETF) posted their biggest bullish gap on the open since January 4th. Far more impressive in my book, however, was the jump in government bond yields. An asset class far more sensitive to baseline growth, the aggregate of 10-year government bond yields from the US, UK, Germany and Japan has taken an extremely divergent path to the traditional favorites like the S&P 500. That said, it posted its best single-day rally since December 19, 2017 to begin this week. 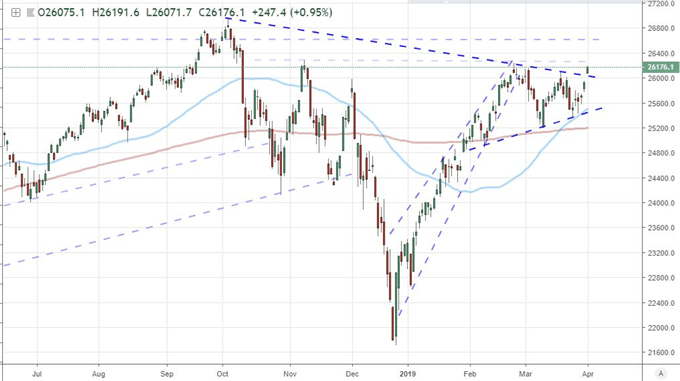 A technical break on a single asset (like the Dow) is the weakest possible impression of a new trend in my book. An alignment to a systemic theme like risk trends is a step higher- as speculative momentum can build upon itself. Yet, even with that broader commitment, follow through is still best served by a common and clear motivation. There was certainly a focal point to the bullish interests. Trade wars and monetary policy registered a few headlines over the weekend and into Monday, but clearly, volatility was reserved for simple growth interests. The top headline Monday was the enthusiasm afforded to the Chinese government’s PMIs. With a strong correlation – and leading release schedule – to official GDP updates, the data is watched closely, especially when recession fears are already circulating around the market. The March figures impressed with a manufacturing report that returned to growth (50.4 versus 49.6 expected) and the composite climbing sharply (54.0 versus 52.4). The enthusiasm leap-frogged to the UK report and US ISM equivalent as the session wore on. A market with a bias will select what it is market moving and what is not. Yet, growth is not a theme that we can easy cherry pick for a tailored outlook. There is too much data that can contradict a mistaken view. This past session, European and Australian PMIs continued to disappoint. Japan’s quarterly Tankan report disappointed and US retail sales dropped. When it comes to carry markets back to record highs and beyond, the question to ask isn’t what started the move. The answer is: what can sustains it.

Chart of Aggregate 10-Year Gov’t Bond Yields for US, UK, GE and JP and Rate of Change (Daily) 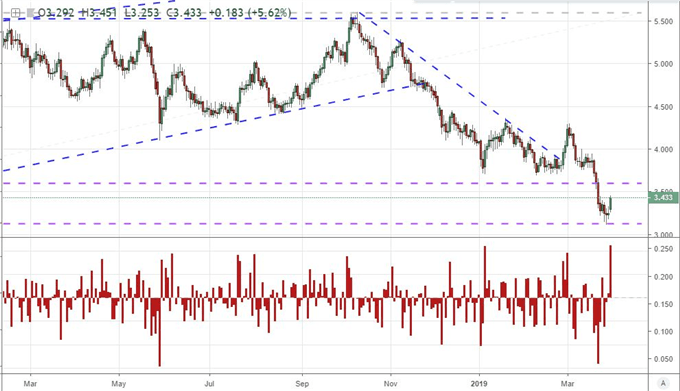 EURUSD is Leaning Heavily on 1.1200 as Euro Helps Leverage the Dollar’s Appeal

In the uneven commitment to risk trends, we can pit one more reliable speculative asset versus lesser alternative or set a haven versus a yield-generating market. In the FX market, the options are a little uneven given the divergence of Yen crosses as a carry trade representative relative to other risk assets or the breakdown in more traditional carry currencies to the ebb and flow of speculative appetites. Performance in currencies seems to be following more systemic and less volatile means. A prime example are the world’s two most liquid currencies. The Dollar has slowly advanced this past week and edged out slightly more elevation to begin this week. The climb seems to defy the simplistic ‘safe haven’ status assigned to it (while a haven, it is more appropriate when risk swings to panic), the market seems to be more privy to the Greenback’s nuance. That said, trade wars considerations have done little to truly bolster the currency’s case, rate forecasts have not improved materially for Fed with a cut still the market consensus for 2019, and the economic data was uneven as discussed above. Yet, we find another role is offering a far more practical leverage to the Dollar: that of the principal counterpart. With the Yen under pressure on the questionable risk trends, Pound plagued by Brexit and the Euro extending its slide; there is only one outlet for the kind of liquidity that represents: the Dollar. 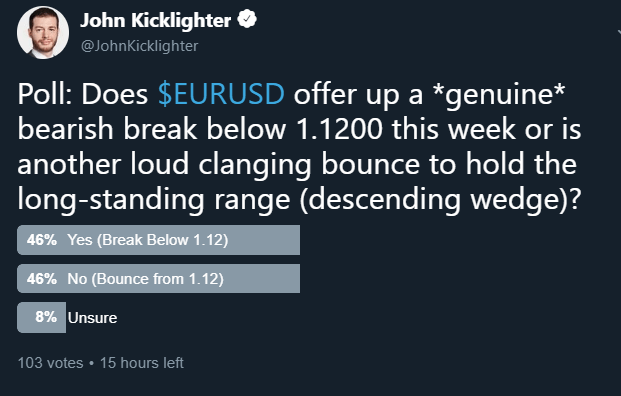 Where the Dollar has legitimate claim to some speculative interest, its motivations are more passive at the moment. If we are looking to the DXY attempting to overtake 97.75 or EURUSD posting a genuine bearish break below 1.1200 (the 61.8% Fib retracement of 2016-2018 and the same corrective phase over the range dating back to the Euro’s lifetime), we need to find motivation with deeper roots. That could come from the Euro’s side. The currency managed an exceptional rally through 2017 that was – in my estimation – largely based on over-indulgent rate expectations for the ECB. We have seen the momentum towards that first European Central Bank hike fade to nothing through the first quarter of 2019. The introduction of the TLTRO fully undermined any sense of a turn to normalizing policy with the end of the QE program in December. There is enough premium behind this theme in particular that it could usher in significant tumble from the equally-weighted Euro index I follow that recently produced a significant break. Add to that a clear disparity in GDP from the PMI figures, underpriced risk from the bearings on a problematic Brexit course and internal dissension through political discord like that sowed by the anti-EU Italian government. 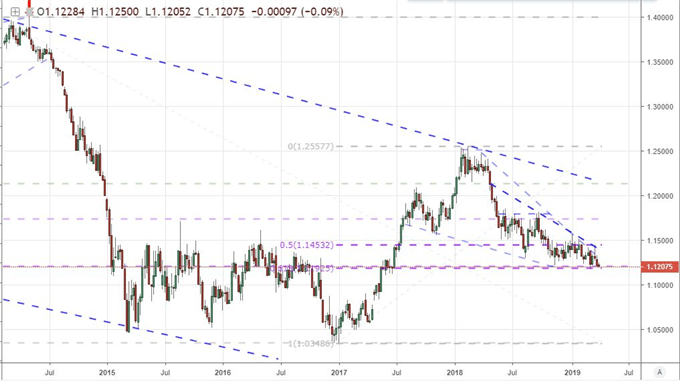 Speaking of Brexit, it seems there is still surprise that the country lurches ever closer to a ‘no deal’ outcome. Last week, Prime Minister Theresa May’s government brought the general proposal she worked out with the EU back in November back for its third unceremonious rejection (the so-called ‘MV3’). After this Friday rejection, expectations tangibly shifted. The April 12th deadline pulsates with threat. That is the course we were on with the Sterling as we entered the new week. Scheduled for Monday, Parliament was due to hold another round of indicative votes in an attempt to come up with an alternative scenario to May’s frequently rejected effort. While a scenario that would be based in participation with a customs union came closer than any of the other options fielded, all four solutions were rejected. The Sterling tumbled on the news. Pairs like GBPUSD, GBPJPY and GBPAUD are showing the struggle inherent whether range bound or attempting something more. There are reports that the Prime Minister is considering a fourth meaningful vote sometime this week. I suspect anticipation will keep volatility high and a trend out of reach. 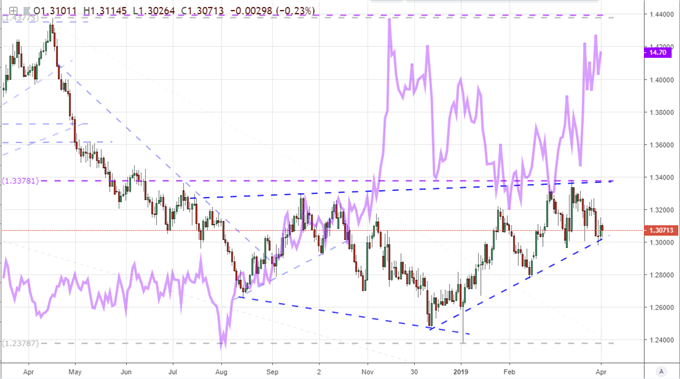 For other currencies to keep tabs on, the Australian Dollar registered a number of updates on the economic calendar with mixed results – the manufacturing PMI and business outlook were poor, but an inflation measure did pick up modestly. This data will not carry the kind of weight that the Reserve Bank of Australia’s (RBA) rate decision holds for Tuesday morning. We can’t write off the impact this may have as the RBNZ the week before showed explicitly that there is potential from these wayward carry currencies – which makes for an interesting set of scenarios for AUDNZD. Another major out of the spotlight worth watching is the Swiss Franc. The data run to start the week was notably unfavorable and the spill over from the Euro’s troubles is hard to miss. EURCHF is the most indicative pair for the single currency and it is leaning heavily on support having potentially breached depending on where your register the lines of conviction. Elsewhere, crude oil has extended its advance despite President Trump’s reflections on the extended commodity price and his calls for OPEC to increase production to provide relief. It is far more likely that the bounce in risk trends and (uneven) bounce in growth data to start this week helped the ‘demand’ portion of this commodity’s equation. We discuss all of this and more in today’s Trading Video.