Historically, the monthly US nonfarm payrolls (NFPs) figure is one of the most consistently market moving indicators on the global docket. That is due both to its insight into the health of the world’s largest economy as well as its influence over monetary policy decisions from the world’s largest and most influential central bank. Frankly, I set my expectations low for the impact the May figures would wring from the markets this past Friday. The underlying trends from the employment statistics have been driven deep into robust territory such that a backtrack that would lead to direct fears over economic trouble or anticipation of a Fed policy flip seemingly far away. The 75,000 net jobs added to the economy (100,000 less than expected) hold in the unemployment and tick lower in wage growth (to 3.2 percent) would have offered little to systemically alter expectations. The caveat distorting the normal reservation was the heightened state of speculation. 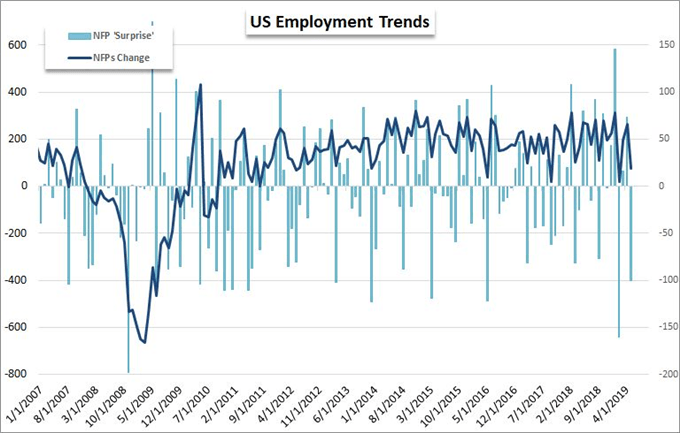 Markets have grown increasingly aware of the fragile state of the global economy and financial system with the late-in-the-cycle position of economy and business health meeting acute threats from external influences like trade wars. This sensitivity has slowly increased the level of volatility in the actual market activity – even if implied readings are still promising restraint. It is in these conditions that the markets will also desperately seek out salvation before speculative benchmarks cross the sentiment Rubicon. Where can we reasonably expect support? A wholesale change in economic fortunes or surge in expected rates of return is unrealistic to expect. That generally doesn’t happen. Resolving artificial crises like trade wars is a possibility, but removing a risk is not the same thing as seeding new opportunity. For something like the S&P 500, there is not much in the way of discount to offer easy pickings. 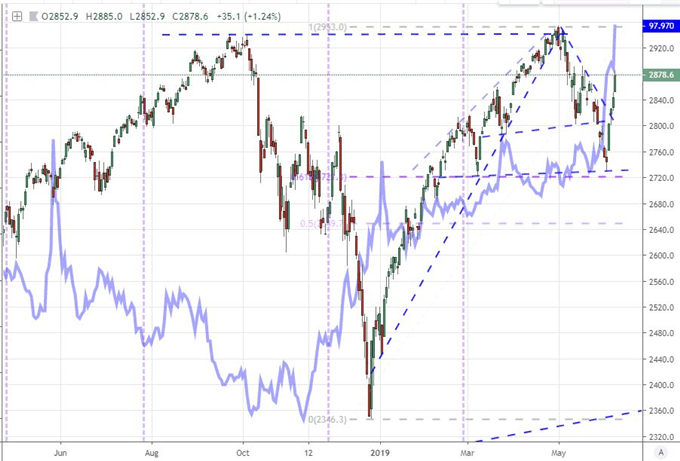 The Trade and the Signal from the Dow, the Dollar and Gold

Given the shake up in speculative views this past week and the precarious mix of the fundamental backdrop, it is important to keep tabs on markets or benchmarks that can gain serious traction but also stand as indicators of the investor perspective in their own right. We begin with the US equity indices. Risk trends have not offered a uniform optimism this past week across those assets I usually compare for the breadth of conviction, including: global equities, emerging market assets, carry trade, commodities and more. Even through Friday’s acceleration, there was a notable lack of commitment from most markets while those assets that did climb made very little effort to close the enormous gap they maintain to benchmarks like the S&P 500. In US equity benchmarks, there remains a notable lag from the tech-heavy Nasdaq while the broad S&P 500 and blue-chip Dow have enjoyed the reversal of a false head-and-shoulders neckline breakdown. I am partial to the narrower measure which advanced 5 straight trading days (matching the heartiest climb since May 14, 2018) following a 5-week slide (the longest tumble in eight years). Overall, this past week’s performance was the best week since November and third largest rally over a similar period since 2011. 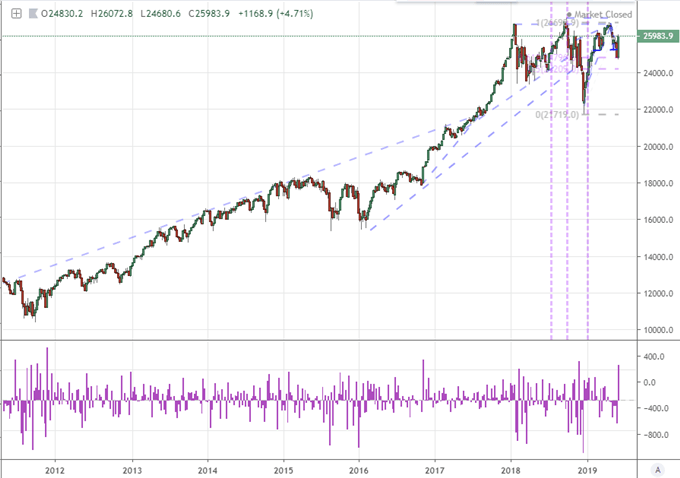 Conditions are more complicated when it comes to the Dollar. Is the Greenback reverting back to a safe haven – falling as US stocks rally – or is it embracing its status as the top carry currency as returns wane? I think there are an array of headwinds the currency is collectively succumbing to as the general mood of the market is sent into upheaval. It would be a stretch to suggest that the Dollar is conveniently shifting its focus to a troubled rate forecast only now considering expectations of subsequent rate hikes started to collapse beginning in October and official rate cut projections started to bleed in a few months into 2019. The DXY Dollar Index continued to trend higher throughout. That said, recently, the projections for cuts have grown particularly intense. While the probability of a 25 basis point cut at the next meeting in less than two weeks, Fed Funds futures set a July cut at 85 percent and a move by September above 95 percent. This is a burden if the currency is floating carry trade exposure, but I doubt there is much of that baked into this low rate environment market. Instead, more convoluted issues like a constant pressure of trade wars, a troubled economic outlook, Trump pressuring the Fed to act and little hope that authorities could mount support should it be needed are far more unsettling. 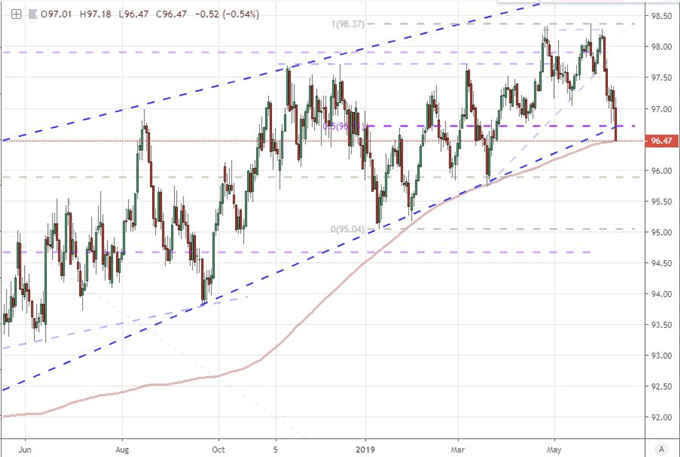 Perhaps the most important instrument for the attuned global macro trader moving forward is the bearing and pace of gold. The precious metal is too often considered a mere safe haven. While it certainly has such properties should an unambiguous fear descend on the markets, I think this asset is essential for its particular nuances. Back in the height of the first wave of massive stimulus programs from the world’s largest central banks, the commodity experienced an incredible rally that would eventually top $1,900. That was not a safe haven claim (risk appetite was in full swing from lows during its run from 2009 to 2011). The Dollar was subverted but it was nowhere near as intense or consistent as what we saw from the metal. So where was the demand coming from? With the rise of balance sheet inflation, local financial assets – including currencies and government debt – was inadvertently devalued. If the world’s most liquid currencies were uniformly dropping, there aren’t many places for capital to flow in order to find stability. Gold is one of the very few stand-ins. Could we witness that isolation of needs once again? After an 8-day rally and the strongest week’s rally in three years, we stand at the cusp of a major technical breach which could symbolically complete a massive reversal a decade in the making. 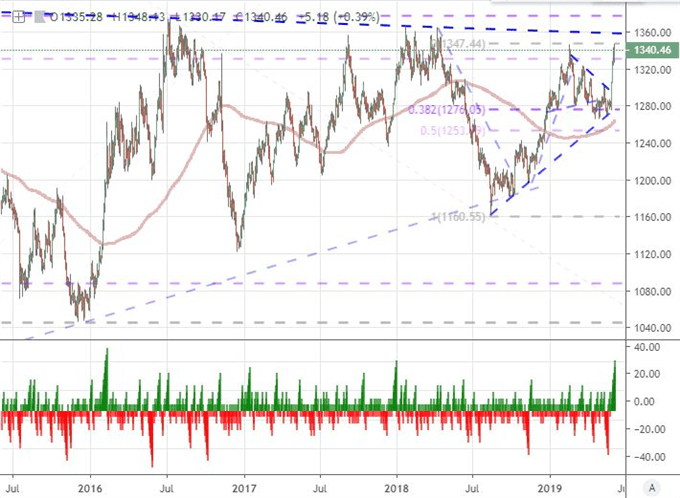 ‘Other’ Themes from Trade Wars to Eurozone Stability

As risk trends take firm hold of sentiment, it is worth remembering that everything else starts to register as a catalyst or a means to this more considerable ends. That said, we’ve seen plenty of swells in ‘risk on’ and ‘risk off’ these past years without the trend coming out intact. Whether looking for the additional fuel to sentiment fires or keeping tabs on themes that can come back into vogue as the systemic tide rolls out, there are a few grander issues to keep close tabs on. Trade wars is once such point. After the close Friday (and after I recorded the video), US President Donald Trump announced in a tweet that he would not apply the 5 percent blanket tariff on all Mexican imports that he had threatened to take place on Monday. That is an unmistakable improvement in the balance of global trade relations. A USDMXN response Monday is very likely, but I’m not so confident that general risk assets like the US indices will respond to this news in kind. If that is the case, we have a serious problem as the market will readily recognize a lack of willingness to commit to ‘good news’. 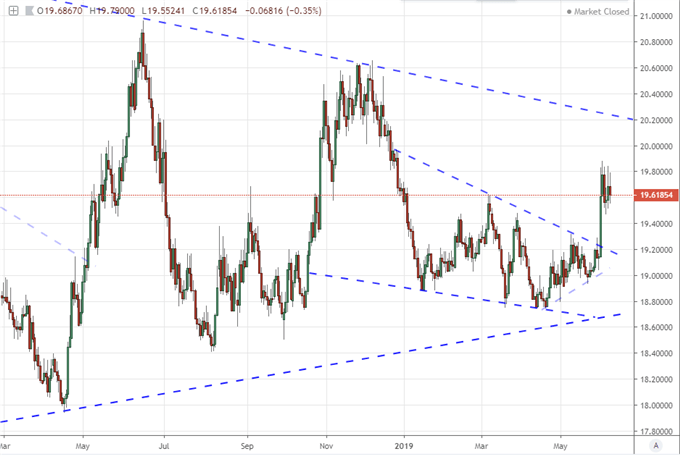 The more embattled trade relationship between the US and China is not so easily diverted it seems. We have not seen any material updates this past week to suggest the two countries have started to pull out of their combined nosedive. While they haven’t increased the tariff list or size of the import tax against each other in at least a few weeks, there is still an overt effort to stymie each other’s business interests. The Huawei ban is still a provocative move which has China warning it has designs on rare earth materials and a blacklist of its own. USDCNH jumped through this past Friday. We aren’t making a break for 7.0000, but the tense relationship is unmistakable and the economic pain adding up as we wait for a resolution is proving very real in economic data. 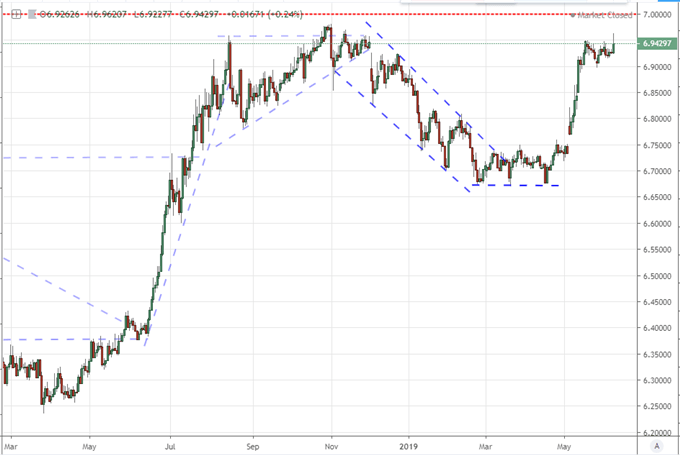 Outside of the widest fundamental bans of influence, there are still some targeted issues that should be monitored for the weight they carry for specific currencies and regions. The Pound for example has proven time and again that its direct and intention to mark progress rest with the news on the Brexit. That will continue to be the case moving forward, but meaningful updates on the EU-UK divorce are likely some weeks out as the Conservative start the procedure to replace its leader following Theresa May’s stepping down Friday. In other words, Pound will struggle for a lasting move. In contrast, the Euro may find itself tipped into a full-scale move with little notice. Monetary policy is a theme for which the market is particularly attentive, so the ECB’s response to the Fed’s growing dovishness may provoke some of the competitiveness we’ve seen in previous years that gets dangerously close to currency wars. My deeper concerns rest with the situation between Italy and the Union. The European Commission found that the country violated its deficit/debt rules and warranted a disciplinary procedure that could tally a 3 billion euro tab. Despite the threats, Italian leaders have stated they will not halt tax cuts and would look to change financial rules. There has also been talk of using an alternative currency to service debt which would be a natural precursor to an argument on whether or not they should leave the Euro. We discuss all of this and more in this weekend video. 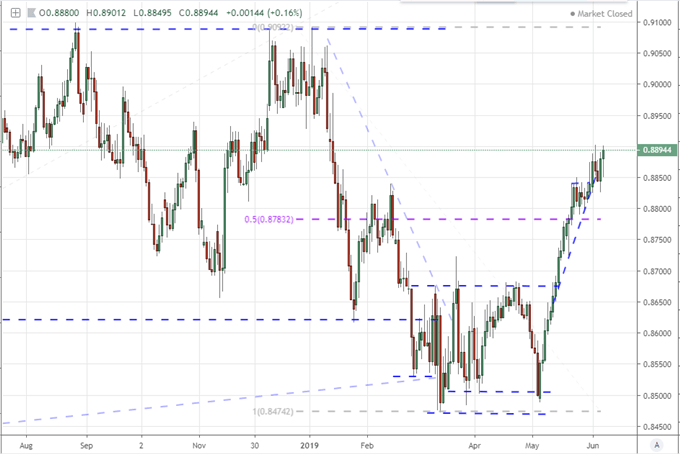