Increased Focus on GDP Does Few Favors for Dow, S&P 500 and Other Risk Benchmarks

Primary fundamental focus has shifted a few times over the past weeks between trade wars, monetary policy and traditional growth. The first two are still receiving updates, but the pressure on economic potential is starting to draw sharp scrutiny from worried investors. On the topic of GDP, there were a range of events that qualified as direct updates including the official Australian 4Q update, China’s announcing billions of dollars’ worth of stimulus in tax cuts and infrastructure spending (not encouraging following the People’s Congress lowering its GDP target) and the Fed’s Beige Book mentioning ‘slight growth’ for many regions.

Yet, the most comprehensive blow to enthusiasm in the health of the global economy came from the OECD’s interim forecast. The group lowered its outlook for the large portion of the world it monitors back in November and it did so again Wednesday. The anticipated tempo for 2019 was lowered from 3.5 percent to 3.3 percent while the 2020 figure was only lowered 0.1 percent point to 3.4 percent. If investors are forced to consider economic activity more closely in their evaluation of risk exposure, the results are unlikely to be encouraging.

US indices are just off record highs after their January-February rebound. Other sentiment-leaning assets like global shares, emerging markets, junk bonds and carry trade are far less over-extended yet they are running well above values we would expect given the backdrop for actual economic activity. I’m keeping close tabs on the Dow and S&P 500 in particular. Both benchmarks are tracing the same pattern with the past two weeks threatening to undo the bullish work achieved the two months prior. A break below support and the 20-day moving average would be only a moderate cue for the scope of global sentiment, but all that may be needed is a spark to ignite the tinder box. 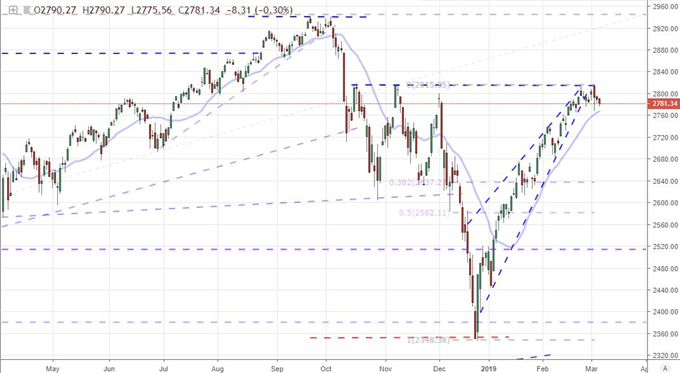 Canadian Dollar Tumbles after BOC and Data Mix, Does Euro Face the Same Fate with ECB?

The top market mover among the major currencies this past session was undoubtedly the Canadian Dollar. The currency extended an impressive bullish run on the USDCAD’s bullish wedge breakout last week and triggered a tentative breakdown on the otherwise consistent climb through CADJPY. What makes this drive truly noteworthy is the fact that it was leveraged through significant fundamental development. Technical breaks are more often associated to significant drives than those that are cold start and out of the blue, but the addition of an easily accessible motivation in fundamental terms carries far more capacity.

This past session, the Bank of Canada (BOC) rate decision drew the closest scrutiny as the group is considered one of the most hawkish leaning authorities among its largest peers. The cautious outlook and uncertainty over economic health read more like the dovish setting that is the standard across the major central banks. This subtle shift alone is unlikely to keep the currency sliding, but the addition of the steep increase in the trade deficit (-C$4.59 billion versus -C$1.98 billion expected) and the slowing of the Ivey manufacturing report (50.6 versus 54.7 previously) is tangible pressure.

Looking out over the coming session, there is a similar event with even greater anticipation behind it than what we saw between the BOC and Loonie response: the European Central Bank (ECB) rate decision. The world’s second largest central bank is in a much more fragile position and its decision holds far greater significance for the global economy and financial system than most others. A more overt tone of caution is expected alongside a downgrade in growth forecasts – consensus well-earned given the state of data these past weeks. The problem is that this is a central bank just steering out of its QE nosedive as of December with a currency still harboring rate expectation premium from 2017. A strong dovish signal with mention of TLTROs (QE-light) would certainly move the ECB down the relative monetary policy list and jeopardize the Euro’s buoyancy. More concerning, it could call into starker contrast that the world’s largest central banks are nervous about the future and showing they have very little ammunition to fight any fresh crises. 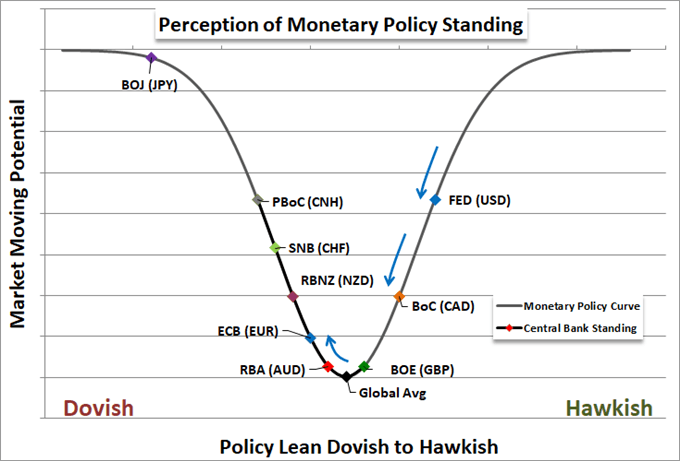 Dollar and Pound are Fundamentally Anchored, Aussie and Kiwi Dollars May Slip Their Moorings

While not nearly as fundamental loaded as the Canadian Dollar, there were substantial declines registered by both the Australian and New Zealand currencies this past session. Given how restrained FX and global asset volatility as the moment, these movements are even more remarkable. The Aussie Dollar carried the more overt fuel with the 4Q GDP reading missing forecasts with a 0.2 percent growth (versus 0.5 percent expected) which does no favors following the unfavorable assessment offered up by the Reserve Bank of Australia (RBA) the day before. Whether AUDUSD or an equally-weighted Aussie measure, we find the currency is sinking to levels only briefly visited during the flash crash at the beginning of the year. Let’s see what the trade figures and subsequent rounds of Chinese updates does for its ailing health. As for the Kiwi, there was far less targeted event risk to rely upon, but the drop was unmistakable. Sympathy losses are less likely to translate into trend, but a universal slide in wayward carry or export-centric currencies can hit upon a theme that builds.

Yet, if you have clear expectations for such currencies, make sure to choose a counterpart that will not impede progress. The Dollar and Pound would be poor candidates. The Greenback slowed its advance this past session with the Beige Book warning of growth and 2018 trade deficit settling at its highest level in a decade. Ahead, we have 4Q household net worth, but the real interest is in Friday NFPs. That will distract and pull our attention forward while disrupting most efforts to inspire a run in the interim. The Sterling’s capacity to allow for a stronger (bullish or bearish) counterpart to take control is even lower. Parliament’s ‘meaningful vote’ Tuesday is the latest of ‘the most important decisions on Brexit’ that we have seen these past months. To set a clear bullish or bearish view on the Pound before we know if a deal is miraculously pushed through or we are driven to the extension vote on March 14th would be very speculative – hence few will take that risk. So, consider pairs like CADCHF, AUDJPY or even AUDNZD over GBPUSD, EURUSD or AUDUSD for the time being. We discuss this and more in today’s Trading Video.

Chart of the NZDUSD (Daily) 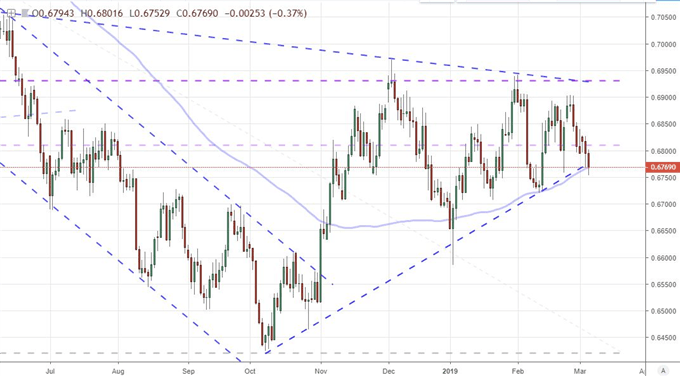