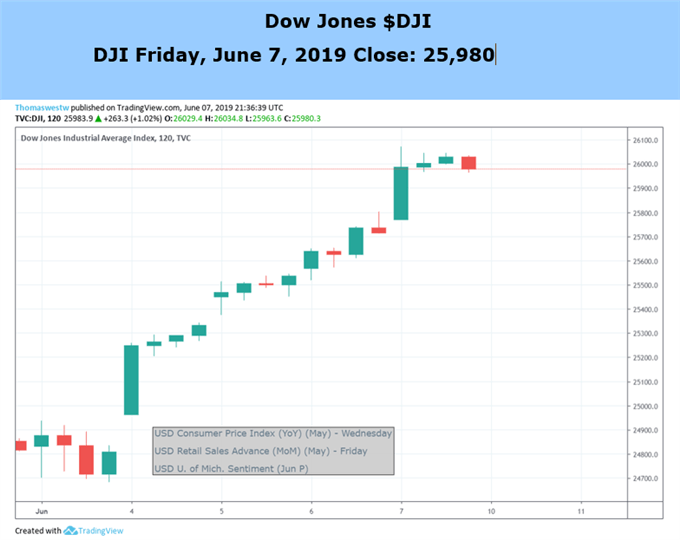 Global equities staged a considerable relief effort last week as a dovish Fed helped to buoy the decade-long bull run for US indices. Still, the DAX 30, FTSE 100 and ASX 200 all enjoyed their own rallies – recapturing key technical levels. The economic calendar for the week ahead is nearly devoid of high importance events, thus the themes we have been negotiating for months – trade wars and global growth concerns – will likely dominate the headlines.

The Dow Jones will eagerly await a resolution to the US-Mexico tariff threat, which may quickly draw to a close. On Friday, President Trump said it was likely the two countries come to an agreement to avoid tariffs before the Monday deadline. The removal of a threat to one of the country’s largest trading partners and neighbors would inject optimism and relative calm into US stocks. 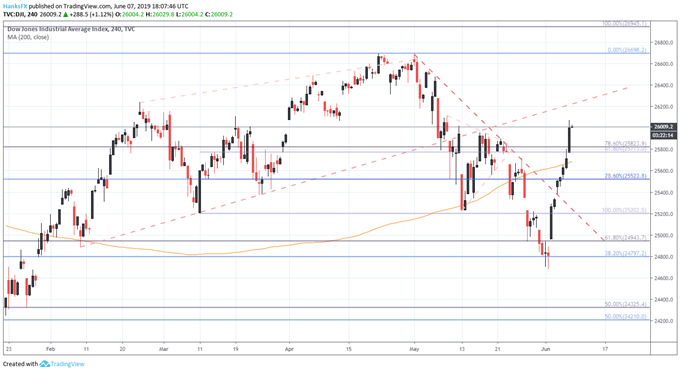 Apart from trade wars, the Industrial Average and the S&P 500 alike will look to Friday’s release of US advance retail sales data. Retail sales have been slipping as of late and a litany of corporations have cut forecasts. Inflationary pressures brought about by the ongoing US-China trade war are likely to manifest in this sector – and could weigh on total sales and margins.

The FTSE 100 is due for a slew of data – but few of them are likely to significantly influence the Index’s price. That said, the Index will look to ongoing political positioning as members of parliament determine who is next to take up the position of Prime Minister. 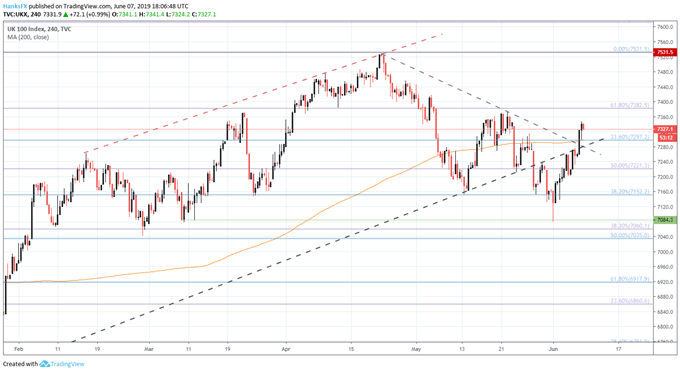 The Australian ASX 200 is due for unemployment data on Thursday, a week after the Australian central bank sliced its interest rate to the lowest ever at 1.25%. Unlike the Dow Jones and S&P 500, the ASX 200 is unlikely to react positively to poor data – with very low chances of another near-term cut from the RBA. 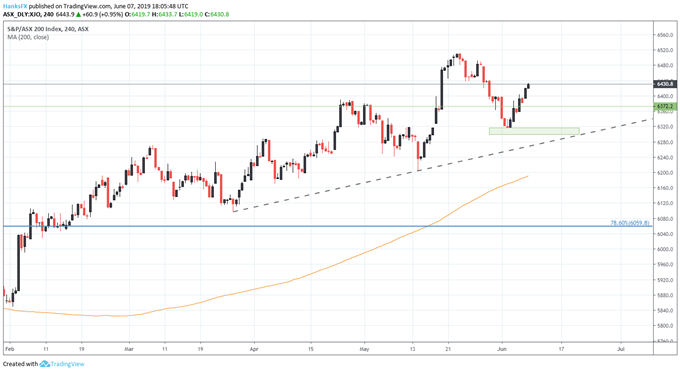 View our Economic Calendar for upcoming data and events that may shake up the trading landscape.

Finally, one event may exercise influence across global equity markets. Top finance ministers from across the G20 group are scheduled to meet in Osaka Japan this weekend and trade talks, monetary policy and global growth will undoubtedly be on the docket. This meeting presents an opportunity for trade representatives to lay the groundwork for agreements ahead of the Presidents and Prime Ministers who are due in Osaka at the end of the month. At a minimum, expect commentary on the state of trade progress between the United States, China, Japan and the European Union. For other equity updates and analysis, follow @PeterHanksFX on Twitter.