Wednesday’s FOMC meeting delivered a shock to currency markets with the US Dollar plunging across its major counterparts. Meanwhile, the dovish developments out of the central bank offered a tailwind for the Dow Jones but was ultimately unable to close higher for the day. With the Federal Reserve’s new monetary policy path solidified, the Dow Jones will have to identify which fundamental themes will dictate price action moving forward.

After March’s FOMC statement, rates look to stand firm for the foreseeable future with one hike expected through the end of 2020. Further, the bank announced it will taper balance sheet roll-off, likely by the end of September. While the dovish policy may prove troublesome for the financial sector, the rest of the Dow Jones benefit – in theory – from a continuation of the current “cheap money” environment. The policy should promote capital expenditure and the adverse impact on the Dollar may serve to make US exports more attractive. 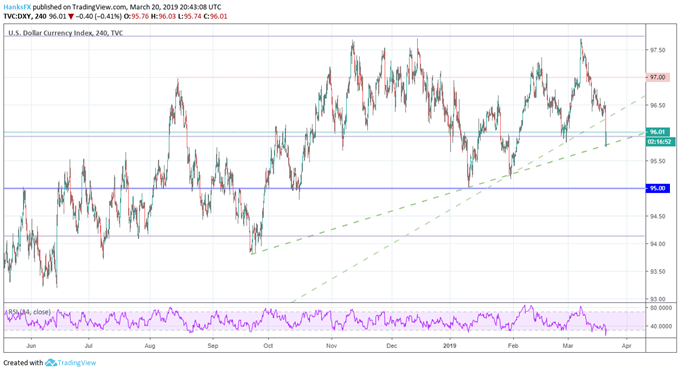 On the other hand, Dow Jones components will have to wrestle with slowing domestic growth ontop of a beleaguered global economy. Lower US GDP forecasts have already began to appear in some earnings reports and will be reflected in share prices. Coupled with the late-cycle stature of the US economy, domestic equity indices may face turbuluence in the coming days as investors decide which theme commands more respect.

In tomorrow’s session, Boeing will play a role – one which it has recently become accustomed to – in the Dow’s performance. Shares of the airplane manufacturer traded lower Wednesday after the FBI announced a criminal investigation into 737 Max approvals. Shares should continue to provide a headwind on the Industrial Average in Thursday’s session. 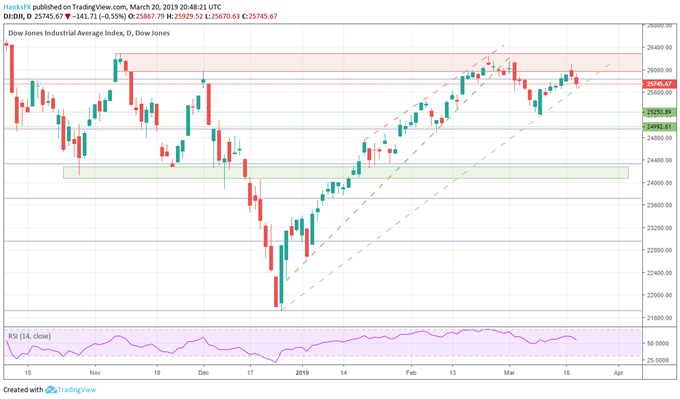 The technical landscape of the Average offers an opaque outlook, in-line with the fundamental groundwork. Should traders and investors decide the dovishness constitutes a continuation rally, two key resistance levels reside at 25,831 and 25,960. As for support, the index lies narrowly above minor support from December 2019.

Catalysts in Thursday’s session could arise from the Bank of England’s rate decision. If the event is anything similar to Wednesday’s FOMC meeting, expect volatility in the British Pound along with the FTSE 100.

Should another major central bank strike a dovish tone – particularly the BOE which has been relatively hawkish as of late – the concerns of global growth may outweigh the generous domestic monetary policy in the United States and pressure the Dow Jones.