Export-heavy sectors in the Dow Jones may remain pressured in the coming days as markets come to terms with lower Chinese GDP forecasts. On Tuesday, Chinese Premier Li Keqiang said the Chinese government will aim for the economy to grow in a range of 6% to 6.5% in 2019, compared to last year’s 6.5% goal. Despite progress toward a US-China trade war deal and significant optimism regarding the talks in markets, materially lower GDP will likely constitute a reevaluation of earnings to be garnered in sectors that rely on Chinese exports.

Read up on A Brief History of Trade Wars for a primer on economic conflicts of the past.

The sectors which export the most to China: aircraft, machinery, agriculture, automotive and microchips account for roughly $67 billion in annual exports according to the Office of the United States Trade Representative. Together, the export totals from the five sectors make up approximately 51% of the $129.9 billion in total US exports to China. To gauge the impact of lowered GDP forecasts on US equities, the aggregated ETF prices of the largest fund from each sector can be compared to the S&P 500. 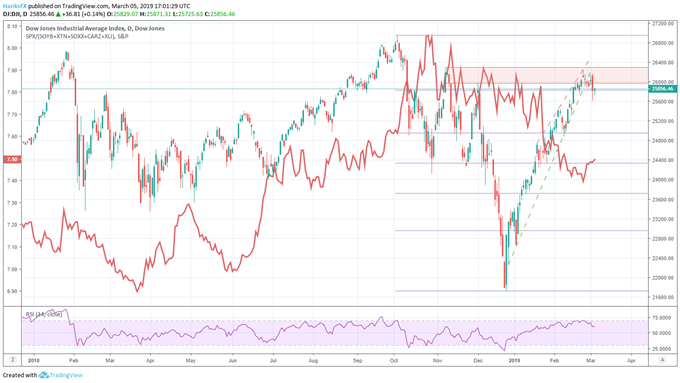 While the index is imperfect in capturing all export components, it does serve to provide a general overview of the performance of companies sensitive to Chinese growth and imports. Major names in the underlying funds include Boeing, Ford, Caterpillar, Micron and General Motors. Therefore, their impact on the broader indices of the Dow Jones and the S&P 500 can be substantial.

Moving forward, the underlying shares and sectors may be a source of volatility in the US equity market as traders and investors iron out the revenue implications of slower Chinese growth. Conversely, a trade-war breakthrough could serve to buoy the threatened sectors.

A deal could also propel the agricultural sector, most notably soybeans (SOYB ETF), to rebound to pre-trade war levels. Such a rebound would likely make meaningful progress in driving the ratio of the funds lower versus the S&P 500, recapturing some of the lost ground over the last nine months and offering an opportunity for the sector to outperform benchmarks.