View our Economic Calendar for the release of US Q4 GDP tomorrow and other important data for the majors.

The Dow Jones and S&P 500 are in precarious states after Wednesday saw a slew of comments from US Trade Representative Lighthizer, Fed Chairman Powell and to a lesser – more political – extent, Gary Cohen pressure the indices. 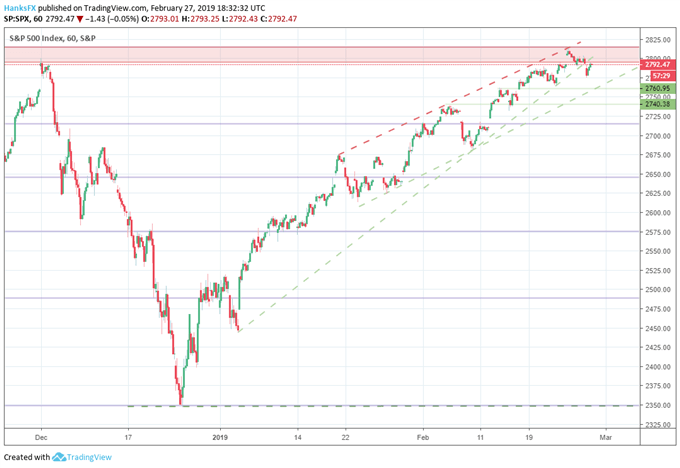 Learn the differences between the S&P 500, Dow Jones and Nasdaq

In what proved to be the most market-moving comments, Mr. Lighthizer’s testimony to the Senate dealt a sobering blow to the trade war optimism that has been circulating since early last week. Thus, the indices forfeited gains they achieved last week and traded precariously lower in their respective wedges. As the session progressed the two equity markets were able to claw their way back to positive territory but an undeniable blow to sentiment was dealt.

A Brief History of Major Financial Bubbles, Crises and Flash-Crashes

Tomorrow will deliver a pivotal piece of information for the US equity market as US Q4 GDP is released. The data includes the impact of the partial US Government shutdown that totaled 35 days and sapped an estimated 0.13% from GDP per week. That said, Caterpillar will be an important stock to watch as it is oft cited as a global growth bellwether. Unsurprisingly, the heavy-machinery maker has lagged the broader Dow Jones as global growth concerns weigh but Thursday’s data could spark a return to parity. 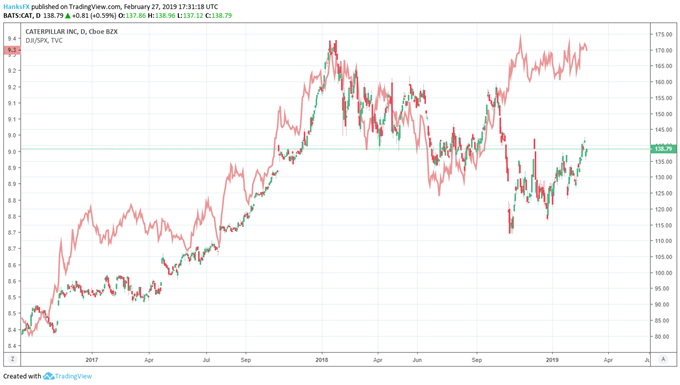 Similarly, a solid GDP print could improve the performance of the S&P 500 relative to the Dow Jones. Since October’s rout, the Dow Jones has outpaced the S&P 500. Traditionally, the opposite is true as the S&P 500 reflects more acute speculative interests – and therefore greater return – while the Dow provides exposure to growth-dependent, blue-chip companies. Follow @PeterHanksFX on Twitter for updates and analysis on the US equity space.

Sentiment data from IG also puts forth an interesting picture, highlighting the difference in sentiment between the two equity indices. While short interest in the S&P 500 has risen sharply amongst IG’s retail traders, the same cannot be said for the Dow Jones where a larger number of traders have entered long positions. 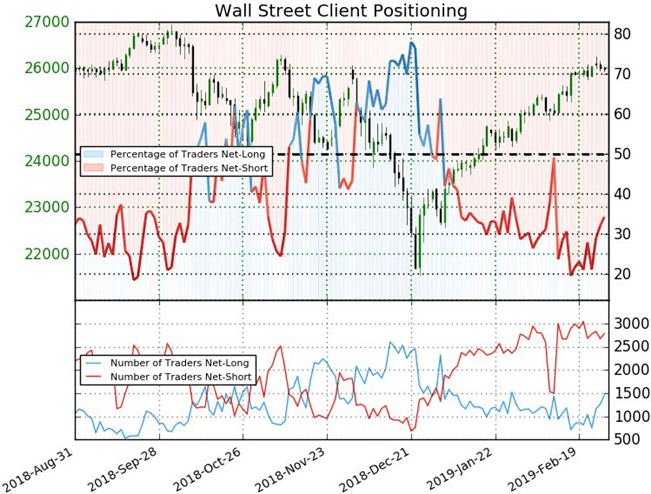 See how IG clients are positioned on the Dow, Gold and the S&P 500 with our free IG Client Sentiment Data. 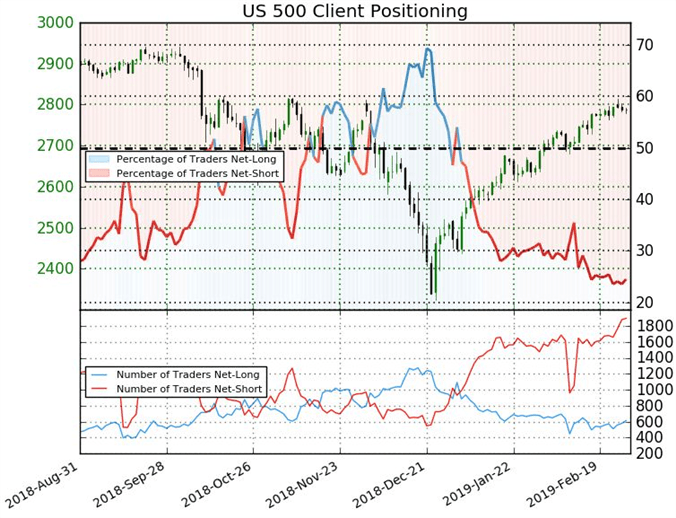 Apart from hard data, trade wars will remain at the forefront of investor concern. With President Trump’s return from Hanoi, markets may gain further clarity on his proposed meeting with Chinese President Xi Jinping as the negotiations progress.