Compared to last week, the week ahead should provide relative calm for US equities. The Dow Jones remains beneath record highs unlike its S&P 500 and Nasdaq counterparts. With a lack of domestic data, commentary from the central banks of Australia and New Zealand early in the week may offer some slight influence over the index as they offer their monetary policy outlooks and offer insight on the state of global growth.

View our Economic Calendar for live data releases and event times in the week ahead.

Outside of broader macroeconomic concerns, earnings season remains a factor. Although most of the big players have already reported, Wednesday will see Disney (DIS) offer their financial findings to the market. As roughly 3.5% of the Industrial Average, the stock will have some sway – but sentiment could play a larger role.

Disney has rallied nearly 20% over the last month, doubling the performance of second place JP Morgan. An unexpected miss out of Disney could spoil the stock’s recent run and weigh on the Average. Follow @PeterHanksFX on Twitter for an earnings preview and implied volatility of Disney next week.

Looking for a technical perspective on equity? Check out theWeekly Equity Technical Forecast. 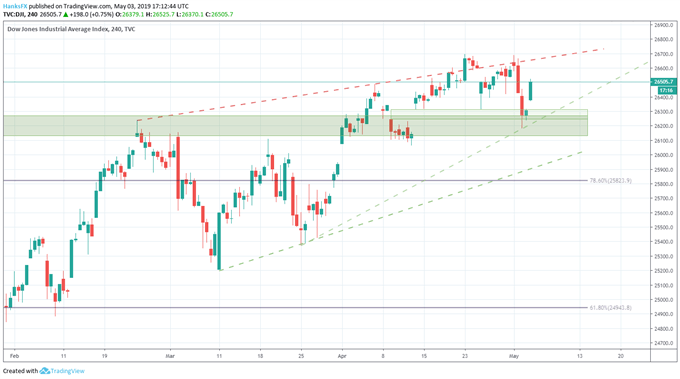 How to Day Trade the Dow Jones

The S&P 500 finds itself in a similar fundamental standing, but with arguably more to lose. The Index was able to print record highs last week, before slipping on a Federal Reserve that was not as dovish as many market participants would have hoped. The Index will look to the same themes as the Dow Jones, but with price at loftier levels and more earnings to come, the group of 500 should experience higher volatility than its blue-chip counterpart. 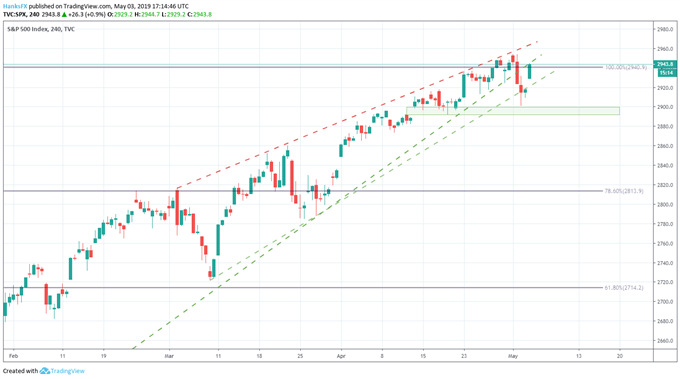 Similarly, the German DAX 30 has little to go by from a domestic data perspective. Given the sparse data calendar, any trade war progress or breakdowns could carry greater weight than usual. President Trump has yet to decide on auto tariffs toward the bloc, which leaves a key uncertainty on the horizon that will eventually have to be resolved. Until then, it would seem imprudent to fight the recent price trend. 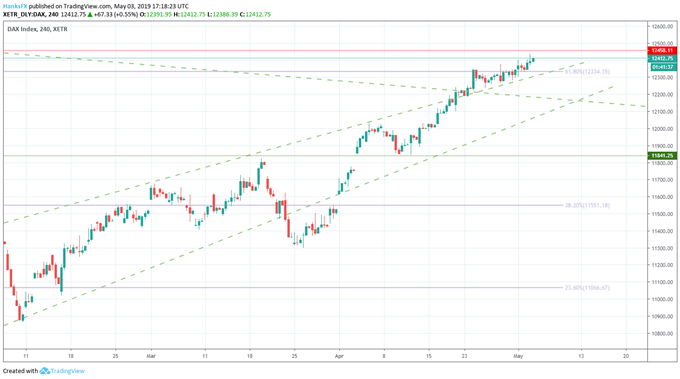 Unlike the DAX, the FTSE 100 has an important data print to look forward to. First quarter GDP is due Friday and is expected at 1.4%. Last week the Bank of England raised some concern regarding their commentary on future rate moves, so GDP will play an important role in the monetary policy path of the economy. 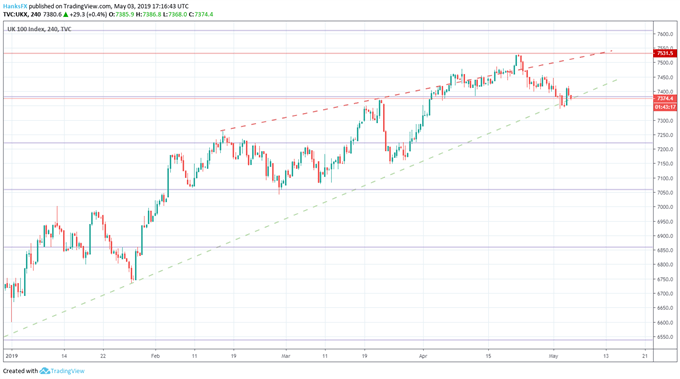 Finally, one theme may impact equities across the globe in the week ahead. After months of negotiations, the US and China are apparently approaching a resolution to their trade war. The deal was first scheduled at the end of May, but rumors have surfaced that Friday may be the date. With that in mind, trade wars will be an important theme to watch.

As the saying goes, a rising tide floats all boats, and a US-China trade deal would amount to such a tide. One caveat is the particulars of the deal. Some market participants have criticized the USMCA agreement for its lack of change from NAFTA. If few changes are inked in the US-China deal, jubilation could be limited.