After a week of minimal movement, volume and volatility may increase for the major US indices as key earnings from some of the country’s largest corporations are released and first quarter GDP is revealed. That said, the Dow Jones may have its hands full in the week ahead as Boeing is scheduled to report their first quarter earnings on Wednesday.

The plane-maker has singlehandedly dragged the Average lower in recent weeks amid ongoing issues with their 737 Max models. This week’s earnings will be the first time the company has reported since a second deadly crash of a 737 Max 8. Investors will be keen to gauge the company’s outlook as it balances order cancellations, litigation and finding a resolution to the problem. Responsible for more than 10% of the Dow Jones price, a bleak outlook from Boeing would undoubtedly drag on the index. Follow @PeterHanksFX on Twitter for earnings season coverage.

View our Economic Calendar for live data releases and event times in the week ahead.

Alongside Boeing, Caterpillar will also report earnings on Wednesday before market open. The heavy equipment manufacturer is also a notable portion of the Industrial Average and often seen as a bellwether for global growth. In that same vein, the company will look to US GDP to dictate price action. 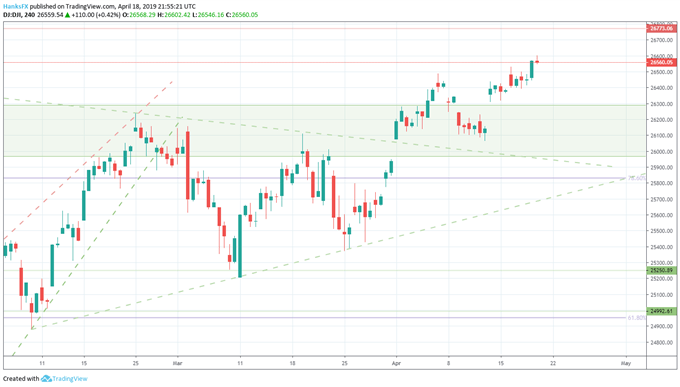 After numerous GDP forecasts were revised upward last week, market participants will finally be able to compare expectations to reality with Thursday’s GDP release. A strong reading – on the back of stronger than expected Chinese GDP last week – would make meaningful strides in calming global growth fears, while a miss could seriously ding sentiment. Although the data may take center stage next week, earning reports from some of the country’s largest tech stocks will likely spur price action prior to Thursday. 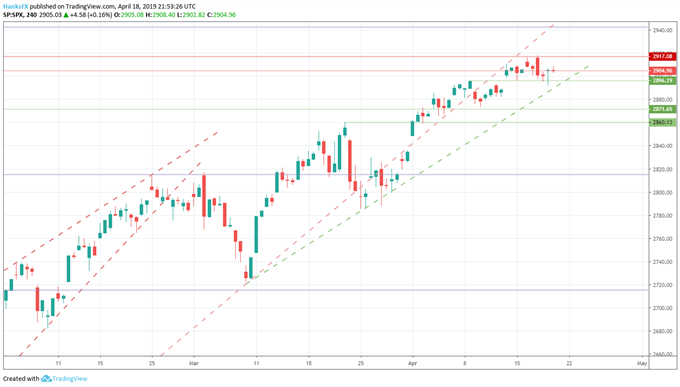 By comparison, the German DAX has a relatively calm week ahead of it. Eurozone consumer confidence released on Tuesday is unlikely to spur immediate price action. Similarly, German IFO readings on Wednesday will offer a deeper look into the German economy – but usually lack the price influence of hard data. Outside of data, the index will continue to track the potential escalation of a US-EU trade war. 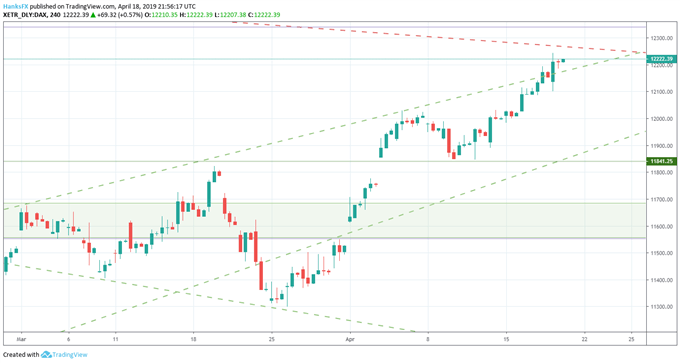 In contrast to the DAX, the Japanese Nikkei 225 will have to weather important event risk in the week ahead. Although the Bank of Japan is decidedly set in its monetary policy ways, a report from Bloomberg last week suggests that the central bank may trim its growth forecasts in Thursday’s Outlook Report. While the subsequent impact on inflation expectations is uncertain, a lower GDP forecast is likely to weigh on equity strength – none more so than the Nikkei 225. View our Economic Calendar for live data releases and event times in the week ahead. 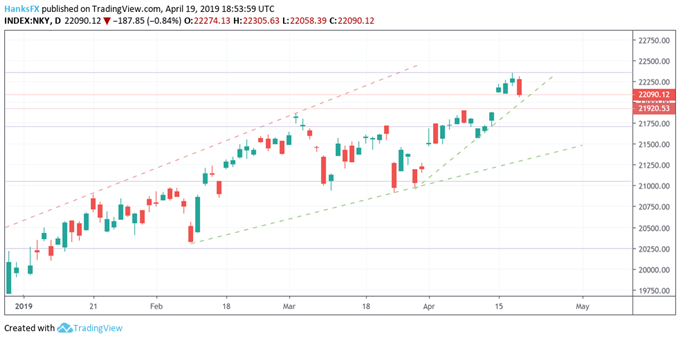 Gold: Gold Price Weekly Forecast: Outlook Soft Even as Brexit Comes Back in Focus, US GDP on Friday

USD: US Dollar May Rise on Haven Flows as Markets Turn Defensive

Read more: History Suggests the Stock Market Will Climb in the Weeks After Easter