The trouble with benchmarks is that they don’t always offer leading signals for the broader market – but many investors tend to assume they will. If we were to presume the normal leading influence from the key US indices this past session, there may be a systemic rise is risk assets – or it should already be under way in the strictest interpretation of the logic. Through Wednesday’s New York close, there was a notable charge from the likes of the S&P 500 and the Dow Jones Industrial Average. While those measures earned significantly smaller gains Wednesday than the previous session, the technical progress was far more substantial. With the additional reach, the Dow closed back above its 200-day moving average and both managed to overtake trendlines that counted as ‘neckline’ breaks on prominent head-and-shoulders patterns. That may not systemically reverse course in favor of a lasting bullish charge, but it nevertheless breaks the momentum in a progressive reversal pattern. 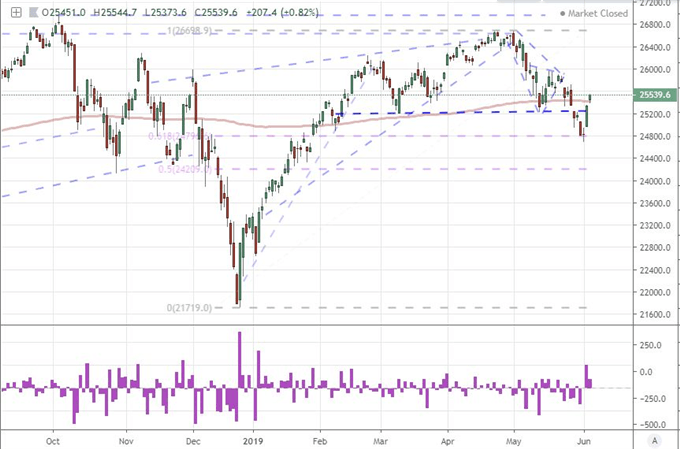 Where enthusiasm deadens is with the search for confirmation in underlying sentiment trends through other assets that draw greater charge from basic sentiment – often referred to as ‘risk on’. There was a notably disparity in performance between the US equity market and most other risk leaning assets. Global equities were at best struggling while some region’s indices dropped. The German DAX, UK FTSE 100 and Japanese Nikkei 225 are good examples. And, showing it wasn’t just an afterhours US boost, the VEU ETF which is global equities excluding the US and trades during US market hours participated in the gap higher up but struggled thereafter. Outside the realm of stocks, there was a notable drop in junk bonds, emerging markets and latent carry trade interests. My ‘fundamental’ interests still rest with growth-dependent risk assets like commodities (the USCI index hit a new series low) and global government bond yields (which extended the slide to multi-year lows), which lead a very different charge. 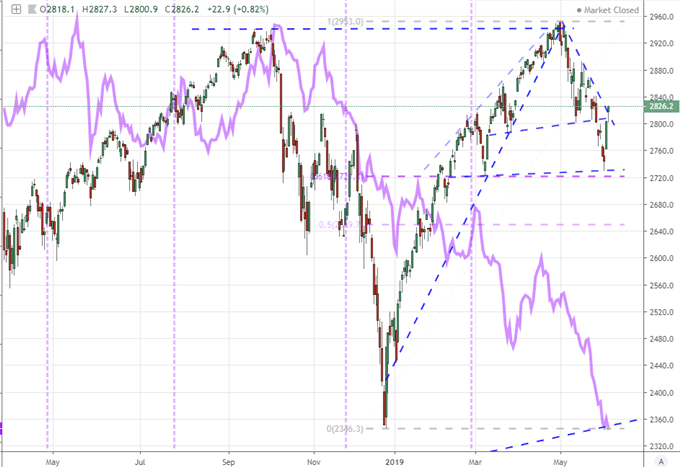 To determine whether the US indices are a leading measure or simply temporarily off the path, the most effective analysis we can do is to discover the ‘why’ to the disparity. From local data and most of the systemic fundamental themes we have been following these past weeks, there was little sign of improvement. There were, however, plenty of headline weighing in on the probability of Fed easing in the near future. The second day of the Fed’s policy framework conference drew different officials offering a mix of caution for projecting monetary policy and warning to slowly manage expectations towards the possibility of future rate cuts. Chairman Powell’s remarks that the Fed stood ready to act should the economy slow and necessitate support would only fuel the market’s heady anticipation for rate cuts. Rate cuts and more can offer a sudden infusion for markets, but it wouldn’t resolve the true problems that we could face. More importantly, if the Fed is put into the spotlight only to be deemed incapable of fighting the ailments of the global market, it could signal that there are no safety nets to an inevitable fall. 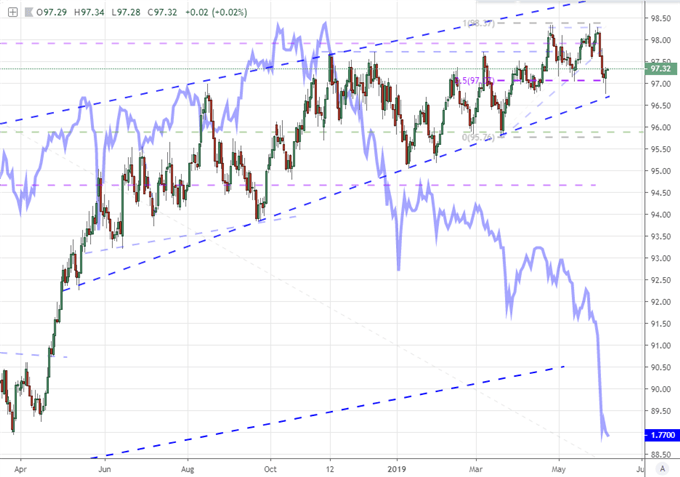 Monetary policy’s ability to support or fail global risk trends is not a theme reserved to the influence of the Federal Reserve. It simply has the most ‘firepower’ left given its efforts to normalize policy from historical extremes these past three years. Today, we will see interest in central banks’ willingness and capacity to offer support spread to some of the other major players in the global spectrum. The European Central Bank (ECB) is due to update its policies Thursday, but the probability that they expand an already extreme position between a bloated balance sheet peaked, the revival of targeted-LTROs a few months ago and deposit rates in negative territory; there is very limited potential to do more. That said, the markets are building up their anticipation of a rate cut before year’s end. Add to this scheduled speeches by the heads of the Bank of England (Mark Carney) and Bank of Japan (Haruhiko Kuroda) are due to discuss monetary policy and/or economic activity. 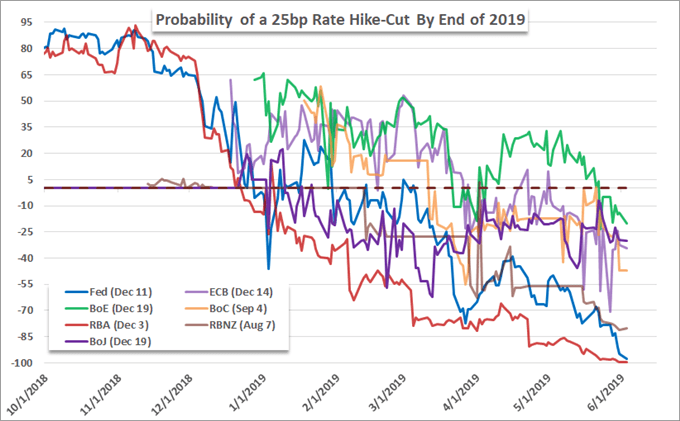 While the backing of monetary policy is only reassuring so long as we don’t look too closely at its genuine capacity, there are other issues that are more firmly positioned as risks rather than potential boons. Trade wars remain one of the more headline friendly themes as of late. For the US-China standoff, the IMF warned that the countries’ course uncorrected would lead to further pain for the global economy. Treasury Secretary Steve Mnuchin said he would meet with his Chinese counterpart in Japan this weekend in advance of the G20 meeting, but there were few encouraging words about what was expected. We haven’t received any updates on when the White House intends to expand its tariff list from the present $200 billion in Chinese goods to encompass all of the country’s imports, but that threat remains. More pressing at the moment is the United States’ pressure on Mexico. President Trump reiterated his intent to place a 5 percent tax on all Mexican imports starting Monday if the country didn’t take meaningful steps towards curbing migration. That said, making for a new political front, Senate Republicans have suggested they would not support the economic barrier if the matter was put to them.

The result of unique pressures and the end game for fundamentals, growth concerns are another pull on investor confidence. Following up on the World Bank’s 0.3 percentage point downgrade on its global growth forecast, the IMF issued its own warning Wednesday. Reflecting on the intended and existing tariffs employed by the two countries, the supranational group said activity could cool by 0.5 percentage points next year if the policies are not quickly reversed. Between these groups’, central bank projections, PMIs and sentiment surveys; it is growing increasingly difficult to avoid darker turn for activity ahead.

Sorting What Matters to the Dollar, Euro, Oil and Gold

The implementation of fundamentals is all about first identifying what is most important for an asset, establishing options for different outcomes on that dynamic and then watching its development. That said, what is the principal driver for the US Dollar? There are definitely competing drivers for the benchmark currency. Its role as a safe haven has clearly been put on hold as there is an explicit deviation between its bearings and risk measures like the VIX. That said, a defacto carry currency performance isn’t exactly reliable as its progress has been frustrating. This past session, technical traders were relieved to find the DXY Index and EURUSD would abide by larger, favorable trends for the Greenback. The index bounced from its channel support and 200-day moving average leaving one of the biggest bullish tails we’ve seen all year. As dramatic as the intraday turn was, it still doesn’t alter the case for momentum. Attention for the Greenback moving forward will still be split between the pain of its major counterparts, evaluation of the Fed’s position and anticipation for the NFPs on Friday. 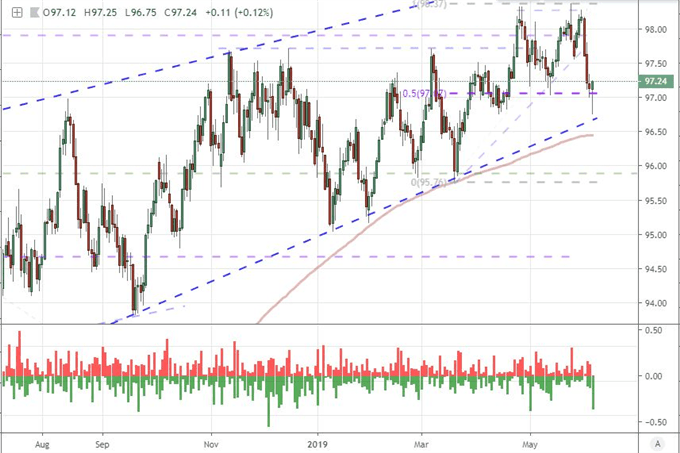 The Euro will similarly be forced to prioritize its catalysts. On the systemic side, the Italy-EU standoff flared this past session. The European Commission was scheduled to release the evaluation of its most spendthrift member: Italy. According to the region’s policing authority, the country was on pace to breach the financial limits which opens it up to penalties. Italian Prime Minister Conte himself said the deficit would be 2.1 percent of GDP in 2019, but he went on to say they were working to change the EU’s fiscal rules. To bookend this contentious situation nicely, deputy Premier Salvini stated clearly that they would not back down from a planned tax cut, ensuring a confrontation and more strain on the perceived stability of the region and currency. This is a systemic risk whereas the ECB decision is more restricted even at the extremes of potential outcomes. Short of a surprise stimulus escalation or rate cut from the ECB, I will keep my focus on Italy. 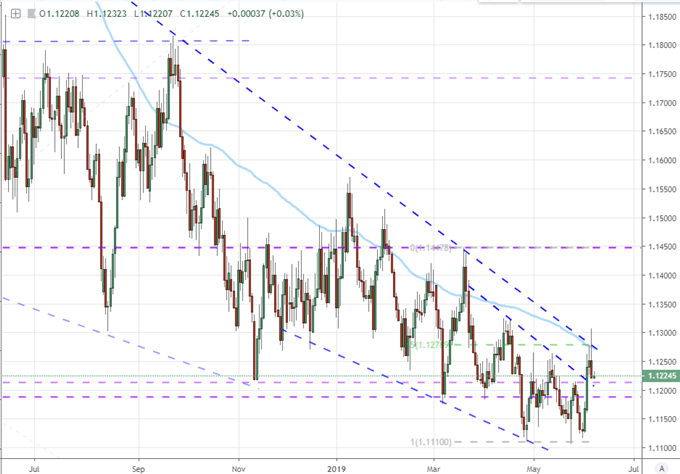 In the commodity arena, there was particularly remarkable market movement that seemed to align to the underlying theme but which reflects on the unique aspects of these individual assets. Gold for instance would climb for a fifth consecutive session for the longest climb since December 2017. That stretched position happens to coincide with some serious technical levels in a multi-year resistance in the $1,360/80 area. To make things interesting, the metal would also put in for its biggest intraday reversal and bearish tail since April 2018. Crude oil on the other hand was not so clever with its intent. The commodity extended its slide to lows not seen since January. The growth-leaning risk asset felt the pressure of the demand side threats in tempered global growth and trade wars. Yet, there was also a supply-side consideration that would inevitably generate traction: the biggest jump in US inventories on records going back over three decades with a 22.4 million barrel infusion. We discuss all of this and more in today’s Trading Video.