You wouldn’t know if from the performance of key ‘risk’ benchmarks, but there remain serious concerns in the financial system’s fundamental landscape. Assessing the state of the market in price action alone, we find a familiar buoyancy and correlation across assets that are otherwise unique but for their general relationship to investor sentiment. In this rising tide, the constant outperformer – US equities – is once again trying to lead bulls into the next era of self-sustaining speculative momentum. Both the Dow and the S&P 500 are within 2 percent of their respective record highs. Neither faces serious technical constraints that they must overcome to challenge their September peaks. Yet, key boundaries aren’t the challenge these indices nor the markets at large have to overcome. The hurdle is conviction itself. What can muster the level of appetite or confidence that not only returns such benchmarks to record highs, but further keeps it rising without a technical milestone to draw it ever forward? In pure speculative terms, the rate of return is tepid and heading lower while low volatility and confidence in momentum have been clearly unsettled by the multiple, enormous bouts of volatility in 2018. Complacency and FOMO (fear of missing out) are powerful drugs in the markets, but they cannot weather all storms. 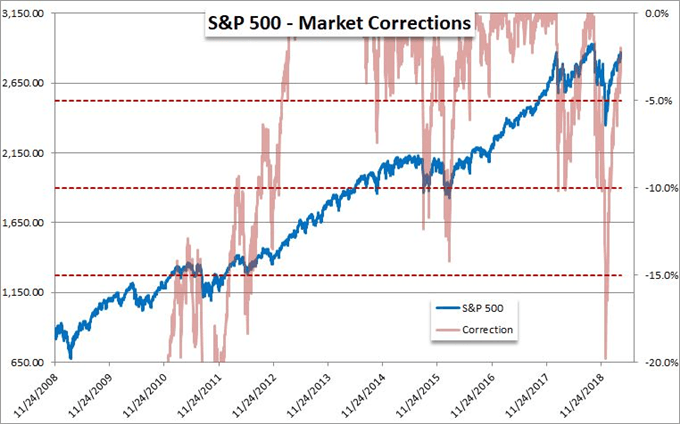 If the capital markets can’t return to the trance of previous years to prioritize capital gains over closer evaluations of risk-reward, then we will need to rely more heavily on fundamentals. That should raise greater concern than optimism. There are three themes that account for a bulk of the market’s attention. The perceived relief from the scourge of the US-China trade wars is one well of speculative relief that the markets have liberally tapped these past three months. It is hard to tell exactly what the market is pricing in at this point, but it would be fair to suggest that solution over the coming quarters with a reversal of tariffs is represented. If officials confirm as much, we are unlikely to squeeze much more leverage from the recovery effort. Watch the headlines as discussions continue. In the meantime, if these discussions break down or the Trump administration decides to pursue similar course with Mexico, Europe or the foreign car industry; those negative ramifications are not properly priced in. In similar fashion, the monetary policy course the world’s central banks are taking is a theme that has already exerted so much influence over the market, it is hard to imagine there is any unrealized speculative confidence to be sourced from desperate negative rates or renewed stimulus programs. If anything, the need of these extreme efforts will raise greater concern – hence President Trump’s call for Fed QE is troubling. Trade war fallout and ineffective monetary policy are concerning because they speak to irredeemable growth. The WTO dramatically cut its 2019 GDP forecast last week, will the IMF and World Bank do the same at their Spring Summit?

Over the past few decades, the VIX Volatility Index has become to be known as the market’s preferred ‘fear’ measure. It would be so convenient to have a single indicator that can give a definitive reading on the confidence in the market – and reassuring when it is easing. In reality, this reading is host to a number of caveats and qualifiers that results in a spotty record of accurately forewarning unfavorable market turns. Nevertheless, when a bias is in place, scrutiny makes way for convenience. Traders are always in search of ‘obvious’ opportunities like the unquestioned advance in US equities. However, they are just as readily drawn to well-established trends that can be exploited for range trading. That is particularly true of retail speculators and a principal trade approach for those in the FX market. While net speculative futures positioning from large participants continues to dictate some measure of meaningful trend among the most liquid currencies, the smaller and less experienced retail traders are showing a clear appetite to take advantage of the regular – and sometimes volatile – ranges for the likes of the EURUSD, GBPUSD, EURGBP, USDJPY and more. 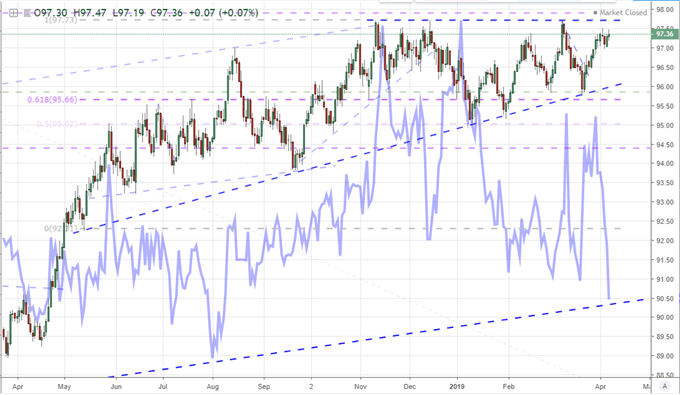 The anchor on these majors is not the result of a dearth in fundamental influence but rather an abundance of it. The Dollar is both the premier carry currency amongst the majors as well as its absolute haven. Its economy is caught up in the undertow of the global cooling as we’ve seen in data like this past week’s ISM non-manufacturing report and it does not magically escape the detrimental influence of trade wars. The confusion for the Greenback is as tangible in the fundamentals as it is in the charts. For the Sterling, an anchor of conviction to the ever-elusive Brexit path means a breakout with legs is exceptionally difficult to establish. Then there is the Euro, which carries the greatest fundamental burden of them all. The fragility of Eurozone unity, unmistakable economic trouble, under-appreciated Brexit exposure, a trade war target and monetary policy stance on the verge of a Bank of Japan’s (BOJ) aimless wandering make for a particularly fraught forecast. So long as these issues continue to clash and obscure the future, ranges can persist. However, these congestion patterns are just as likely to be defined by exceptional volatility as they are their observance of explicit technical boundaries. 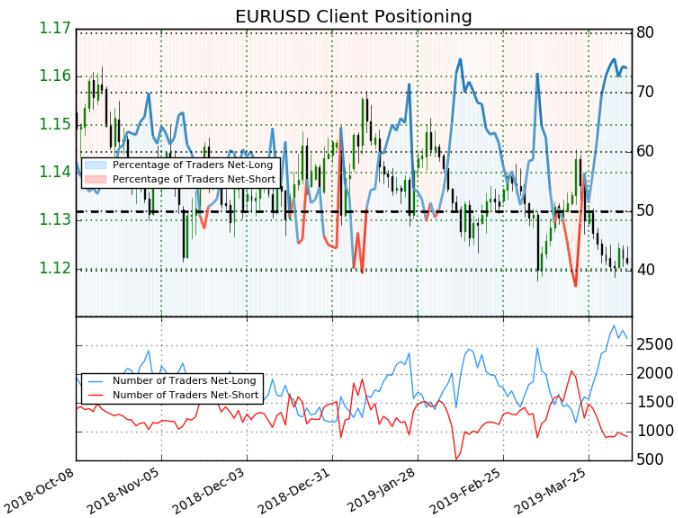 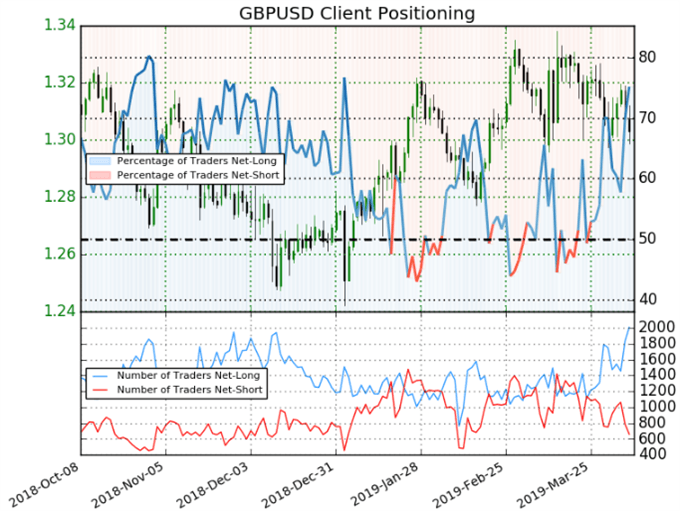 Looking out over the week ahead of us, I will keep a constant vigilance on the key themes discussed above. Should any of them catch traction, the potential for a lasting and systemic trend is far greater than any other individual development – whether scheduled or not. Yet, there is something to be said for the key listings on the docket ahead both as limited depth charges of volatility and potential triggers for those more elemental trends. Top listing across the board if the European Central Bank’s (ECB) rate decision on Wednesday. At its last meeting, the central bank signaled that its fledgling normalization effort was dead on arrival with the introduction of the third TLTRO (targeted long-term refinancing operation) program. It is highly unlikely that they depress the accelerator any further, but additional concern over the course of the economy and/or health of the financial system will draw closer scrutiny. 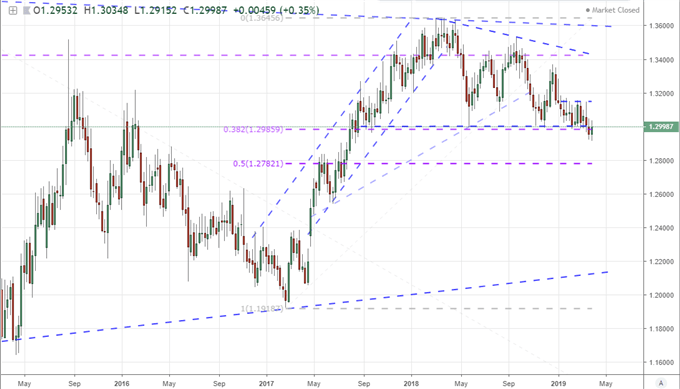 As for the Pound, we have a range of UK data on tap including the February GDP and trade figures that carry their own weight. Yet all of that will not even yield a glance by traders who are tied up in active Brexit developments. To end this past week, Prime Minister Theresa May announced she was seeking an extension from the European Union (EU) of the Brexit date out to June 30th. And, to account for the EU’s concerns about the timing, she indicated the United Kingdom would participate in EU Parliamentary elections. Of course, if a deal was struck before the May 23rd start of the elections, the UK would halt its efforts and withdrawal its candidates. Will the EU agree to these terms? Will May’s government survive under this strain? With the April 12th deadline (Friday) in view, traders will be watching very closely. As we contemplate the Euro’s and Pound’s risks/opportunities, the Dollar will stand ready to play the alternative or victim to charged volatility. There is certainly event risk on tap for the USD. Friday’s University of Michigan consumer sentiment survey is the most pressing event on my US list given its influence over the growth concerns, but we shouldn’t underestimate the monetary policy implications of the previous month’s CPI update nor the FOMC minutes. Then there is always the headlines on progress or collapse in negotiations with China over trade. We discuss all of this and more for the week ahead in this weekend Trading Video.