See how retail traders are positioned in US crude oil as it holds 58, Gold as it revives its climb, GBPUSD as volatility rises, S&P 500 as it pauses from Friday’s drop along with the rest of the FX majors and indices intraday usingthe DailyFX speculative positioning data on the sentiment page.

Growth Concerns, Trade Wars and Monetary Policy are Starting to Converge to the Risk of the Markets

We have followed the tides behind the biggest fundamental themes in the financial system as they have traded control over sentiment and the capital markets these past months. It is important to keep tabs on the status and hierarchy as it is from these wells that a genuine environmental shift and ultimately trend will likely originate. The principal players have not changed over that period, which is encouraging as it makes running a reliable fundamental evaluation of the markets much more feasible. Yet, it can also be frustrating to see specific flare ups in any one of the individual matters fail to reach critical mass and thereby offer the larger opportunities for which traders prefer. Yet, when the systemic avalanche takes it will likely be a fundamental culmination between trade wars, growth concerns and monetary policy. Generally, trade wars will be more of a catalyst than environmental factors, but in that role it is particulary adept at leveraging concern. A joint report from the New York Fed, Columbia and Princeton Universities estimated (conservatively) Tuesday that the tariffs implemented as part of the trade war weighed US income by $1.4 billion per month by October and cost the US economy $6.9 billion in 2018. That is a little finer point than the monthly economic reports we receive statistic bureaus and it colors rhetoric seeping out of the negotiations. It also raises the risk in receiving critical updates from Tweets – especially when there are miscues like that from President Trump on the China-North Korea sanctions mix up.

Trade wars carry many of its own unique issues for capital flow and financial stability, but perhaps its greatest burden is the threat is poses to perception of global growth. Official data has signaled a slowdown in expansion (fourth quarter GDP updates and monthly PMIs) as well as ancillary forecast data (projections from groups like the IMF to sentiment surveys). While speculative appetites can override the burden of economic shortcomings for a while, a reconciliation between market pricing and fundamental value will close eventually. The wider that divergence, the greater the financial disruption. Attempting to hold back the tide and/or dampen the impact of its convergence, we have certain external influences in place. That is where monetary policy comes into play. This past sessionwas another run of central banker insight with a general dovish tone aimed at reassuring speculators that have taken on too much exposure that they aren’t in any imminent danger. I found the Fed’s Rosengren’s remarks that US long-term yields were being burdened by foreign market rates and Daly’s suggestion that the inverted yield curve may ‘be different this time’ particularly interesting given the fractured picture of expectations and potential. Another story that was worthy of note this past session was a familiar update that finds nearly 20 percent of global investment grade debt sports a negative yield. That is generally accommodative, but it also reflects troublingly on economic struggle and the very poor rate of return in the markets. At what point is the low rate of return truly worthy the excess risk? 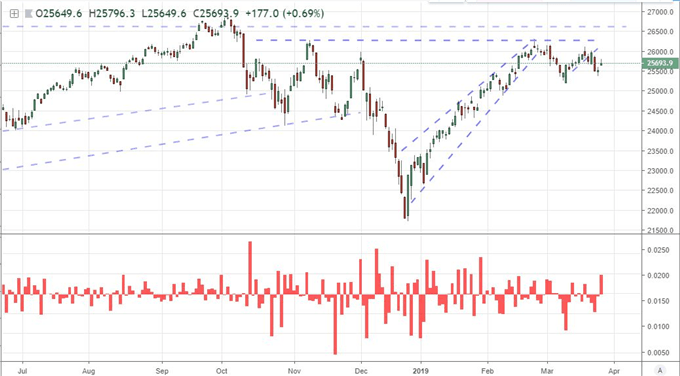 How Much Run Will the Dollar Draw from a Euro Slide?

From our general wait for risk trends to meet reality – and the range trading approach that should prompt – we have more productive market from specific areas of the market. In particular, there was noteworthy movement from the US Dollar this past session. Though the DXY was well within its 10-month congestion pattern, the climb was remarkable against the backdrop of unmistakably disappointing event risk this past session. In addition to the dovish Fed rhetoric weighing market-based rate forecasts further, the view of the US housing sector was dealt a serious blow by a 8.7 percent drop in housing starts and 1.6 percent drop in permits alongside the slowest clip of growing home prices in four years. The centerpiece of the calendar, however, was the Conference Board’s consumer sentiment survey for March. Defying expectations and undermining the recent, post-government reopening rebound; the most recent reading registered a sharp decline in sentiment. The headline reading dropped 7.3 points to 124.1 with the expectations component 4 points lower (at 99.8) and current conditions figure dropping 12.2 points (to 172.8). Against growth considerations and trade wars, that is particularly disconcerting. So if the traditional fundamental picture was unflattering, why was the Dollar higher? Well, if we look at an equally-weighted Dollar index rather than the trade-weighted DXY, the story is picture is particularly different. It seems EURUSD was responsible for much of the day’s action.

While there is plenty of fundamental disparity between the two most liquid markets in the currency to create a general glow for the Dollar, it seems the disposed buoyancy was more a technicality than true speculative motivation. EURUSD is still 1.5 ATRs (20-day) from its critical low and EURGBP continues to exhibit more volatility than directional pressure. However, there is notable weight over the past week and more immediate technical progression points for a number of its crosses (EURJPY, EURCHF, EURAUD, etc). From an equally-weighted index of the Euro, a striking picture arises. We’ve slipped through a well-worn general floor that has stood since August 2017. While this doesn’t have the technical weight of a high liquidity exchange rate where everyone is able to track and respond to the progress, it reflects an important shift. So, what is driving the pressure? Is the dovish monetary policy finally undercutting hold over premium, is local growth troubles upsetting the balance or perhaps the onus of political risks (trade war with the US or internal dissension) finally taking traction? I find that mood establishes what matters and when – and that mood is deteriorating. Watch ECB Draghi’s remarks ahead and the Italian sentiment data. 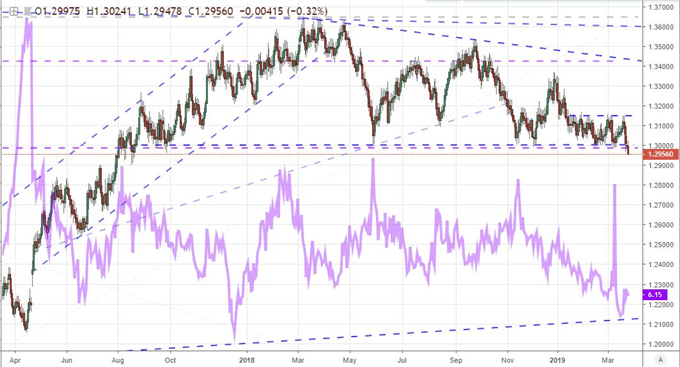 It is a new day ahead, so of course the Brexit situation is completely different than what it was a day before. We were inundated with political headlines from the UK Tuesday and plenty of conjecture to bolster the little verifiable news. Brexit remains the primary focus as it holds extraordinary weight over the course the UK economy and financial system follow in the years ahead. Following moves by Parliament to take greater control over the progress of the divorce, Prime Minister May has suggested she would participate in a meeting with Tory backbenchers Wednesday, with considerable speculation circling the market that she will barter support for her Brexit proposal using her own resignation as incentive. As we test the stability of the government, we are also expecting Parliament to hold indicative votes to try and back the impasse on the PM’s ‘my deal, no deal or no Brexit at all’ mantra. Such a situation would see MPs weigh in on a series of possible scenarios that the Speaker would choose to put up and using the most popular considerations as the foundation for progress. That would seem a definitive course, but we have seen many seemingly-crucial crossroads decided in the past without a genuine resolution to the Sterling’s indecision. I remain skeptical of the market’s intent with Sterling, but readily acknowledge the remarkable volatility measured in ATR and the CME’s Pound volatility index.

In direct contrast to the range of scenarios for the Pound, the Kiwi Dollar was looking at a rather straight forward Reserve Bank of New Zealand rate decision (RBNZ). I recorded the video before the decision but am writing the article after the event. The central bank was unsurprisingly dovish in its tone, and the New Zealand Dollar responded as would be expected of a currency injected into the conversation typically for its carry trade appeal yet has just received overtly dovish news: it tumbled. The response fits a path of least resistance whether looking at an equally-weighted Kiwi Dollar index or NZDUSD. Yet, what is the next stage beyond the tight congestion we’ve seen develop over the months? The remains to be seen. That same uncertainty resides in the Swiss Franc and crude oil as well. For the ‘safe haven’ currency, there is little driving its intent in the traditional fundamental vein. Nevertheless, an unoffensive counterpart is worth a lot in these difficult times. Keep an eye on EURCHF and USDCHF in particular as the Euro and Dollar work out their intent. As for the benchmark commodity, a rebound this past session seemed to find support in supply-side headlines. That will cheer OPEC members, but also draw closer attention from the Trump administration. With the number of distractions for the US President fading, the probability that he weighs in on the level of the commodity rises. He can certainly stoke volatility, but my trend expectations will remain with demand side influence (growth forecasts and risk trends). We discuss all of this and more in today’s Trading Video. 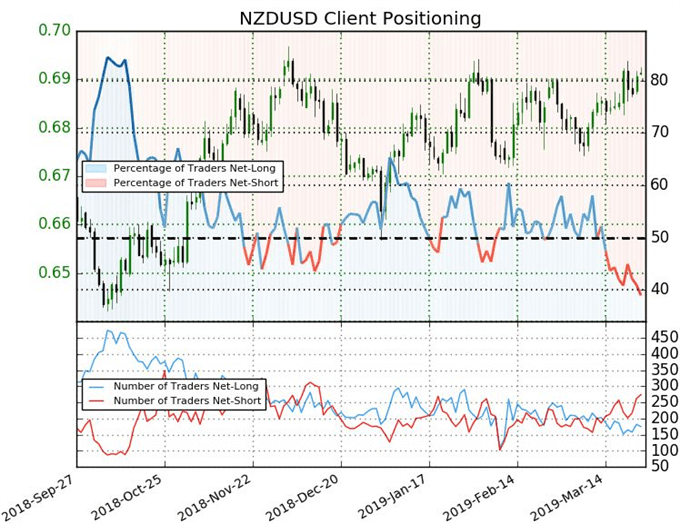