See how retail traders are positioned in the Dow as it slows after the break, EURUSD as it lingers threateningly at 1.1200, GBPUSD as Brexit keeps volatility stoked along with the rest of the FX majors, indices, gold and crude oil intraday usingthe DailyFX speculative positioning data on the sentiment page.

The Fundamental Themes Giveth and Taketh Away

We opened this week to an unmistakable rally in ‘risk appetite’. The gap and advance from the likes of the Dow and S&P 500 was perhaps most notable given their proximity to record highs, but more interesting in the perspective of reviving a fruitful trend was the breadth of the bid in most assets that had a link to the strength of speculative sentiment. As apparent as the general sense of confidence was the presumable fundamental charge facilitating it: an oasis of positive growth forecasts facilitated by March manufacturing data. Yet, as readily as the bullish appetite set in, we saw the breaks thrown almost immediately this past session. Immediately following the Dow’s charged technical break, the index made a range resistance out of 26,250. Meanwhile, many of the alternative assets without the benefit of a high-profile technical cue and starting from a deeper discount went back to spinning their tires before exiting established ranges. Global equities (VEU), emerging markets (EEM), carry trade (yen crosses) all stopped short of making a critical move.

In my book, the most remarkable loss of speculative momentum was the slide in government bond yields. The divergence between the equities and sovereign yields can speak to a fundamental disparity that ultimately undercuts the potential for a lasting climb in sentiment. Thus far, Tuesday has only stalled the market’s intent. However, the longer it takes to regain traction, the more likely the effort fails and leveraged assets like US stocks start to bleed. While there was interest this past session in monetary policy (President Trump harping on the Fed and IMF’s Lagarde suggesting a halt to hikes could revive 2H 2019) and trade wars (economic assessments of Trump’s threats to close the border with Mexico), the focus remained on the state of the global economy. The positive interpretation of the manufacturing PMIs faded and Lagarde’s warnings over the economy added weight. More important for tipping this uneasy balance will be Wednesday’s run of service sector PMIs. There is a run of updates for many of the major economies, but it is the developed economy updates that matters most. Services account for the majority of output for the US, UK and a number of European economies among others. Should this data diverge from Monday’s the market will likely feel the impact. 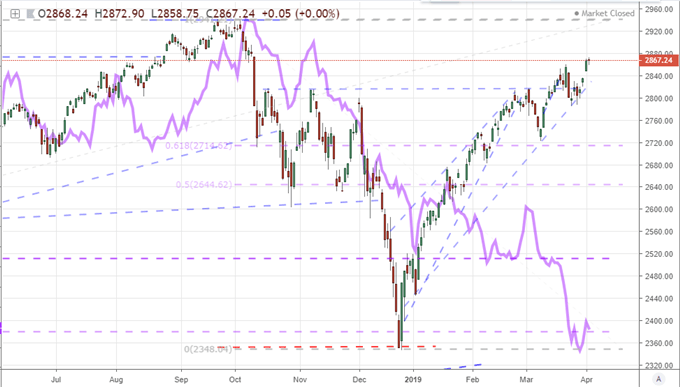 Tensions Grow as EURUSD Lurks at 1.1200 Support That Even Fundamental Traders are Taking Seriously

After a productive – though controlled – slide from EURUSD, we are seeing the benchmark currency pair’s moderate pace bleed off even further. The daily range for the pair is narrowing precisely as it assesses the influence of 1.1200. This is a significant technical level for those that follow charts. Moving up to the weekly and monthly charts, we find that it represents the 61.8% Fibonacci level of the late 2016 lows to the February 2018 ‘cycle high’. It is the same corrective phase of the pair’s historical extremes stretching 2000 to 2008. Yet, you can appreciate the market’s consideration even if you don’t plot out chart-based patterns. The market’s hesitation around this area the past months is overt. Retail traders are largely comfortable with the range and its consistency with their positioning reflecting a growing certainty and appetite to catch another swing. That is not an unreasonable default to take as such a remarkable break in this otherwise restrained financial system would take a remarkable catalyst. 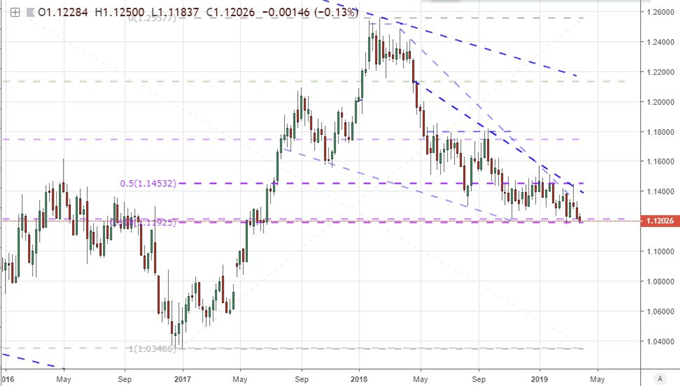 We certainly didn’t find the spark that would tip the market into a key bearish break and further momentous follow through this past session. From the Dollar’s side, the durable goods orders were a weak reflection of the economy but the data doesn’t carry the necessary finality. Rating agency Fitch held the United States ‘AAA’ status with a ‘stable’ outlook which does little to stir the fundamental pot. Ahead, the ISM service sector report can very well tap a more meaningful change in growth forecasts for the world’s largest economy. Relative GDP however, doesn’t seem a very capable charge, even though Europe is starting to show considerable pain on that front. More likely, the Dollar’s appeal as an alternative to its troubled, most liquid counterparts resets the compass. Brexit for Pound, risk trends for the Yen are clear. The Euro meanwhile will likely follow the course set by the culmination of growth concerns, deflating monetary policy premium and political tensions. Do not underestimate the impact that Brexit will have on the EU and the Euro. That is not well priced, but the course of the Euro and Pound are strongly tied. 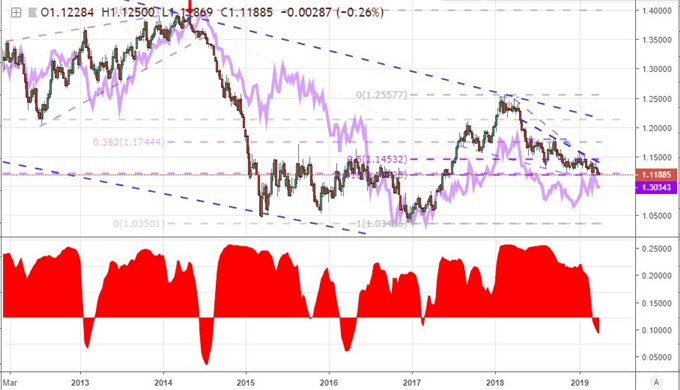 Speaking of Brexit, we were forced once again to keep constant vigilance on the headlines to keep a clear track on the Sterling. With Parliament’s failure to pass any of the four new measures proposed for indicative vote Monday, we were left with no explicit time frame for next steps short of the April 12th deadline. That is the date for which the UK was given to establish a clear intent or risk withdrawing without a plan. With less than two weeks to go, European officials were not coy in warning that a ‘no deal’ outcome was now very likely. This no doubt carries some degree political pressure to frighten their UK counterparts, but it is also simply a practical reality. For those that would write off the risks to achieve the exit, we added another significant warning this past session. Among a few troubling updates, most remarkable was the British Chamber of Commerce’s (BCC) report from a survey of approximately 7,000 British businesses that suggests the economy all but stalled in the first quarter. Even anticipation of a hard Brexit is taking its toll. Feeling the pressure, Prime Minister May was reportedly holed up in No 10 with her cabinet for a long session likely looking to find a compromise at this late hours. Thus far there is still considerable rumor, but it was reported that she intends to ask the EU for a further extension, that May is softening some of her red lines and that her government’s support is seriously flagging.

Among other active currencies, the Australian Dollar proved responsive to Tuesday morning’s Reserve Bank of Australia (RBA) rate decision. The group wouldn’t change policy – as was widely expected – but they did soften their tone. They didn’t have enough room to temper any hawkish animation as there generally wasn’t any left, but the rhetoric did weigh a market more concerned with general growth. The Aussie Dollar slipped, but ranges from the likes of AUDUSD, AUDJPY and EURAUD amongst others still notably holds. In contrast, there is some modest follow through spilling over from the Kiwi’s tumble last week after its own RBNZ rate decision. It is difficult to be too confident in a break like that from NZDUSD if there is a disconnect from rate expectations and risk trends for this long. Nevertheless, it is something to watch. Another very noteworthy move in the ‘currency’ space came from Bitcoin. The benchmark crypto posted a massive rally Tuesday to clear a multi-month range on the biggest single-day rally since December 2017. While under certain circumstances, this could take in some fundamental interest as a desperate need for an alternative to traditional currency – like gold – but that doesn’t seem to be the case here. It was report a very large order was filtered through the market for BTC (estimates I’ve seen range from $50 – $100 million), and that is not a lasting motivation. We discuss all of this and more in today’s Trading Video. 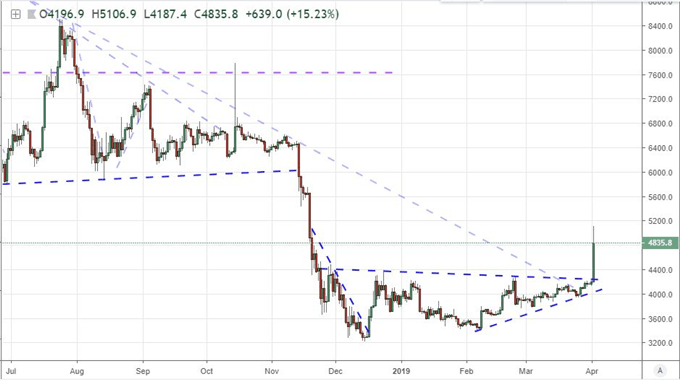