See how retail traders are positioned in EURUSD as it approaches 1.12, NZDUSD after its RBNZ-led tumble, GBPUSD as Brexit generates more headlines than direction along with the rest of the FX majors and indices intraday usingthe DailyFX speculative positioning data on the sentiment page.

There was a notable slide in general investor sentiment this past session. While there were no thunderous moves from any particular benchmarks for speculative appetite that would prompt an overload of the financial headlines, there was an unmistakable consistency in performance. US and global equities eased off along with emerging markets and carry trade. Though intensity was held in check, there are few motivations as systemic as sentiment that can align such a broad swath of the financial system. As we track the consistency in alignment to our standing in the spectrum from fear to greed, my attention remains fixed on two particular players: US indices and government bond yields. From the former, outperformance relative to rest-of-world is uniform across the major indices, but my primary signal has shifted from the S&P 500 to Dow. The former better represents the intensity of risk appetite while the latter better reflects ‘blue chips’, but the Dow has committed to a more overt technical wedge. As for Treasury yields, the stronger growth-implications offer a better barometer for fundamental connection; and the divergence between the two offers a troubling signal all on its own.

As for the most prominent possible feeders to a true risk trend, there wasn’t an obvious change in conviction to fuel a cascading liquidation of speculative exposure. From the recently diminished concern in trade wars, China’s report of a 14 percent drop in industrial profits through February offers another price tag on the standoff – the Shanghai Composite and USDCNH certainly reflect the trouble. Reminding us that this is not simply a US-China problem, it was reported by US Senator Grassley that President Trump rejected the idea of removing tariffs on Canadian and Mexican imports despite the deal in place. Even further outside the US sphere, key EU leaders met with Chinese President Xi Jinping to discuss their requirement of further opening the Chinese economy before participating in earnest in the Belt and Road initiative. From recession fears, we didn’t have nearly the same number of ‘inverted yield curve’ headlines but there were plenty of reminders in data and policy officials’ remarks. Speaking of officials, the central bankers were again out in full force trying to quiet fears while also fostering concern with their simultaneous warnings. ECB President Draghi stated clearly his concern over the adverse effects of the negative rate policies his central bank has maintained – all while saying they had room to do more…

Dow Index and Aggregate of 10-Year Government Bond Yields for US, UK, GE and JP (Daily) 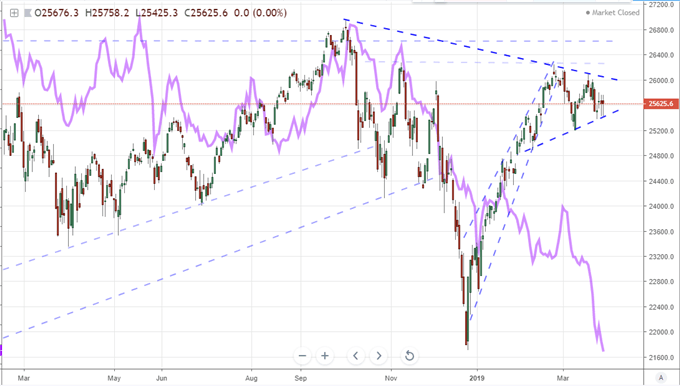 On Tuesday, the Dollar put in for an impressive climb through the DXY Index, but the performance was far from consistent among its crosses. When we looked into the source of the performance, it quickly became clear that the charge was the result of EURUSD which itself was principally a Euro tumble. The Greenback managed another fruitful day Wednesday on the trade-weighted index, but this time it showed a broader consistency. Yet, where was this appetite for the USD originating? Looking to interest rate expectations through a monetary policy theme, Fed Fund futures are now showing an approximate 75 percent probability of a cut before year end. As for data, the trade balance was the most prominent release, and the drop in the deficit (-$55.2 billion versus -$57 billion expected) was primarily a response to a sharp drop in imports (sliding -$6.8 billion) – a poor sign for of domestic health. So, where was did the favorable wind for the US currency originate? Through indirect means. With the Euro still on the lam, the Pound under its Brexit spell and Yen weighing safe haven appeal against the USD, the world’s most liquid currency was falling back on its most elemental appeal. That is a difficult role to maintain moving forward, but it has proven an effective charge many times over previous years.

In contrast to the indirect charge for the US Dollar, the New Zealand currency (on an equally-weighted index) earned its largest single-day loss in seven months. The fundamental spark behind this tumble was obvious: the Reserve Bank of New Zealand (RBNZ) rate decision. The group made no explicit changes to its policy settings, but it did make clear that its balanced threat that the next move is as likely a hike as a cut was shifting to an overt dovish positioning. The market wasn’t shy in responding to the news. The intensity and uniformity of the move proposes greater potential, but it doesn’t materially increase the probability of follow through. If you are drawn to the light of the NZD’s volatility, chose your pair wisely. Something like GBPNZD will almost certainly determine its next move through the Brexit and thereby Sterling. The NZDUSD is less put-upon given the Dollar’s own uneven commitment, but my preference would lean more towards AUDNZD or NZDCHF where the counter currency is expressly balanced with the Kiwi or simply lacking for its own fundamental wave. 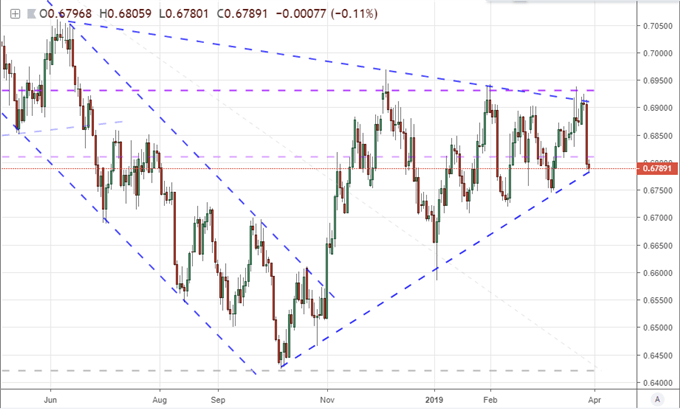 If you were looking for all smoke and no fire – and really, who would pursue that course – the British Pound was completely beset by Brexit headlines. It was a long day for an unproductive update on a two-and-a-half-year saga. The day began with the Prime Minister meeting with her party to discuss the way forward. The outcome was simultaneously a surprise and widely expected next step: Theresa May announced she would step down as Prime Minster if she could muster support for her Brexit proposal. That roused a remarkably stoic response from the British Pound. This lack of response led more than a few traders to question the market’s intent. I believe that there was an underlying belief that this transition would inevitably come either during the Brexit proceedings or shortly after, so there was limited shock value. The more practical throttle was the abundance of distractions to keep traders preoccupied. Will a change in PM truly resolve the UK’s position on its divorce from the European Union? Unlikely. Traders appreciate the trade at the top will not hasten a result from the greatest uncertainty to face the UK economy and financial system in many years.

Later in the day, the focus turned back to the technical details of the Brexit proceedings. Parliament held a series of indicative votes to see if it could win a majority support for any of a number of possible solution. Ultimately, every single one of the outcomes the group weighed on would fail the threshold: no deal, second referendum, a new common market, a UK-wide customs union and more. This was Parliament’s opportunity to take over the proceedings of the separation and introduce nuance to overcome the difficulty of mustering support for a binary outcome. The effort’s failure makes clear that this is far more engrained a burden on the Sterling and UK markets than a single person’s influence. That will undermine the Pound for the foreseeable future. Committing to a lasting bullish or bearish trend on a pair like GBPUSD would take the kind of conviction of course that we simply can’t muster from spinning tires. That said, I believe that both sides of this negotiation (UK and EU) are deeply invested in an outcome that avoids a worst-case scenario. If we do avoid a damaging ‘no deal’ – almost no matter the alternative – the Sterling will eventually find its way towards recovery. In fact, even a no deal will eventually find the Pound seeking its recovery after the economic pain is price in. A recovery will come, it is just a matter of the time frame associated with the path we chose. We discuss all of this and more in today’s Trading Video. 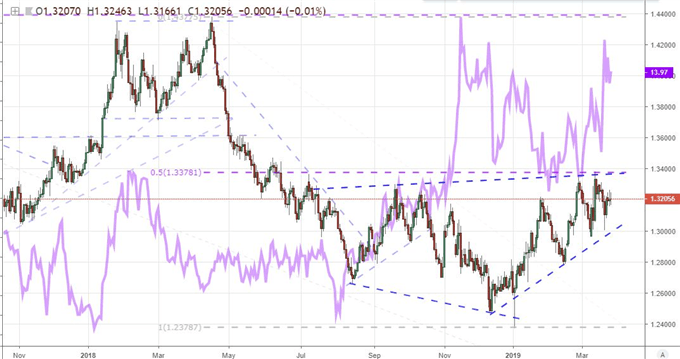