Volatility Drops Deeper into Extremes as Holiday Conditions Set In

A last gasp of volatility arose from the markets through Thursday’s session as the final wave of meaningful event risk found a thinned but receptive audience. Economic activity was a notable focus for the day as PMI activity reports and retail sales data was on tap. The Eurozone composite PMI slipped from 51.6 to 51.3 while the US equivalent took a steeper dive in a drop from 54.6 to 52.8. In contrast, the retail sales updates from the US, the UK and Canada were all markedly better than their respective previous months’ readings. The response from risk-concentrated assets was naturally uneven while the US Dollar posted a meaningful advance of its own. Regardless of whether you were following the course of speculative readings or the Greenback, there was little anticipation that volatility was a sign of impending trend. When liquidity is thin, fundamental and speculative shocks tend to produce bigger moves; but the ultimate impact typically peters out long before it can even tickle hopes for a systemic run. Market depth should be every traders’ top priority for evaluating the market environment through the final day of this trading week and the open of the next one. Many of the world’s liquidity centers are offline Friday for the Good Friday holiday while Europe, the UK and Hong Kong are closed through Monday of next week. That will seriously warp the market’s ability to start – much less carry through – any new systemic trends.

Looking across the financial system, there are few assets that are generating undue anticipation that would conflict with the realities of shaped by liquidity. For rest-of-world equities (VEU), emerging markets (EEM), carry trade (Yen crosses) and many other risk-tailored assets, the technical pressure simply doesn’t register. The exception remains the US equity indices. The Dow ended this past shortened week with an advance that didn’t bring the record October high any closer and the S&P 500 made zero progress on an vary narrow expanding wedge. The exception is the tech-heavy Nasdaq which earned its record high, but it did so with few backing instruments to suggest this is anything other than a rampant speculative chase. While risk appetite can facilitate moves readily enough, it is much less likely that a trend develops for a specific risk-anchored benchmark when its related sentiment measures continue to struggle for traction. Instead, this particular outperformance from the Nasdaq suggests the markets are chasing sheer momentum rather than value itself. Unless there is an emergent rise in risk trends that is only now taking shape, such a move will flounder and inspire a short-term speculative collapse as it closes the unsustainable gap opened to the rest of the market – which can unexpectedly spur a more committed wave of deleveraging by a nervous market vigilant of leading measures. Be wary of jumping on any bandwagons heading into next week. 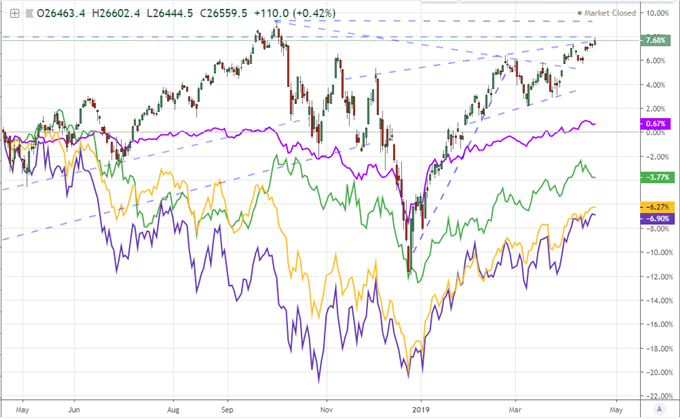 Top Themes for Next Week Starts With Earnings but Includes Trade Wars, GDP and Monetary Policy

If you are looking for something on the fundamental side that can carry the load to a more productive drive into the coming week, it is best to keep tabs on the systemic themes. Though not one of the three primary winds I have been keeping tabs on recently, the US first quarter earnings season will certainly be an important environmental development moving forward. While there are individual reports from key companies to watch for and no doubt an overall evaluation as to the state of Corporate America as more key updates cross the wires, we can also measure important themes depending on how we assess the data. The abject speculative reach will be under scrutiny through the high-flying tech company updates scheduled for release. Microsoft and Intel are old hands while the Amazon and Facebook figures will draw in the noncommittal crowd more effectively. In contrast to the outperforming tech picture offered by the likes of the Nasdaq, the health sector has proven one of the hardest hit of the blue-chip industry. The Anthem figures will be monitored closely for its confirmation or refutation of the pained United Health market response. Cutting closer to the growth bone while also tapping trade wars, we have industrials that are worthy of observation. Caterpillar was a trade war-impacted company in previous updates and Harley-Davidson was specifically targeted by US President Trump. Boeing will be another interesting update given Trump used its European rival (Airbus) subsidies as a basis for triggering large tariffs against Europe – threats to which Europe has responded in kind.

While earnings will be the fundamental well that keeps giving through the coming week, there are other issues on hand that could generate volatility or even trigger a broader movement with the ‘right’ (or ‘wrong’ depending on your perspective) update. Trade wars remains on of the most fluid systemic issues as present. This past week, the leaks suggesting US and Chinese negotiations were heading towards an end-of-May resolution to the trade wars seemed to have generated one of the shortest fundamental half life’s in some time. That isn’t to say it didn’t have an effect, rather it doesn’t seem a discount from which we will be mounting any serious trends. Meanwhile, the United States’ threat to shut down EU-US trade discussions without agricultural goods included in the discussions and the USMCA finding moderate growth analysis in insight as governments question their internt, has yet to stoke a trend that can reliably be expected to burn through the system. In contrast to the lingering, negative risks, the EU and Japan are expected to hold a confidence in the week ahead. As for monetary policy, the Bank of Japan (BOJ) and Bank of Canada (BOC) updates hold far more local influence than international intrigue. For global interest, I would pay closer attention to President Trump’s repeated bashing of the Fed’s policies and his unrealistic market forecasts arising from these comparisons. 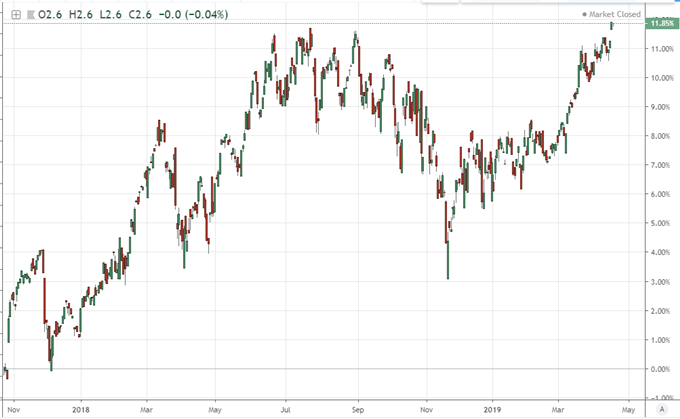 Dollar, Euro and Pound Will Struggle for Drive While Aussie, Loonie and Swissie Should be Monitored

If you are watching for regional risk – or volatility – over the coming week, the US Dollar is certainly a currency to put to the top of the watch list. Through Thursday’s session, the miss on the PMIs and beat from US retail sales seemed to leave a balanced intent. What was it then that led to the DXY Dollar Index’s best single-day performance since March 7th? I personally believe market conditions and illiquidity had far more to do with recent performances than any of the scheduled updates. The DXY Index has carved out one of its smallest 10-day trading ranges (as a percentage of spot) in many months, while the 40-week measure leaves us virtually unprecedented in how quiet conditions are. In the week ahead, updates on thematic interests like trade wars will find a receptive Dollar while the top event risk is Friday’s 1Q US GDP release. If the focus for the broader financial system is on growth, that will make any effort to charge the Dollar to life a lost cause as all anticipation will be pushed back to Friday. From the subsequent two most liquid majors, a forecast for struggle results from a lack of targeted event risk rather than an abundance or principal listing as with the Dollar. The Euro has updates such as the ECB economic bulletin which simply fall short while the Sterling is rightfully transfixed on a Brexit breakthrough which could come any time over the next six months. 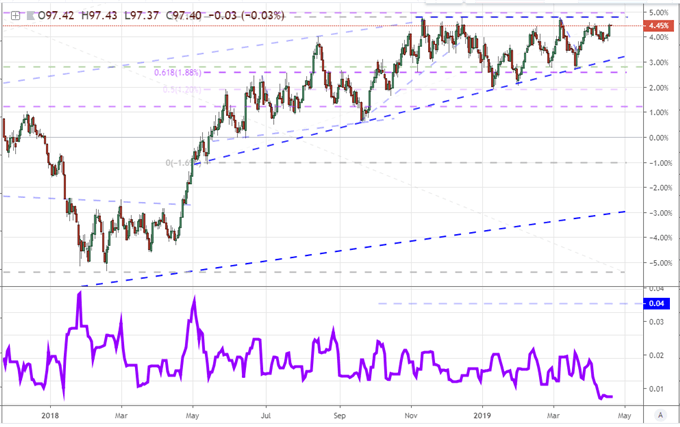 Where the core FX currencies may be be lacking for a definitive driver moving forward, there is certain discrete volatility that may arise for certain lower-liquidity ‘majors’ attached to key event risk. The Australian Dollar was stirred by the jobs figures and business sentiment update this past session and a more targeted 1Q consumer inflation (CPI) figure is on tap for the week ahead. Pairs like AUDCAD, AUDJPY and EURAUD should be monitored closely. The Canadian Dollar is another outlier that deserves closer observation. The upcoming Bank of Canada (BOC) rate decision is one of two major central bank rate decisions on tap over the coming week. Yet, unlike the Bank of Japan’s meeting, it would not be unreasonable to watch for sentiment shift from the Canadian authorities with even a mention of a hike as the next move leveraging a contrast to the Dollar. Perhaps the most overlooked major that traders should consider is the Swiss Frank. This currency is a counterpart and part-time corollary to the Euro. That said, EURCHF cleared trendline resistance, USDCHF shows technical intent and other crosses reflect an overextended short-term thrust. We discuss all of this and more in this weekend Trading Video.. 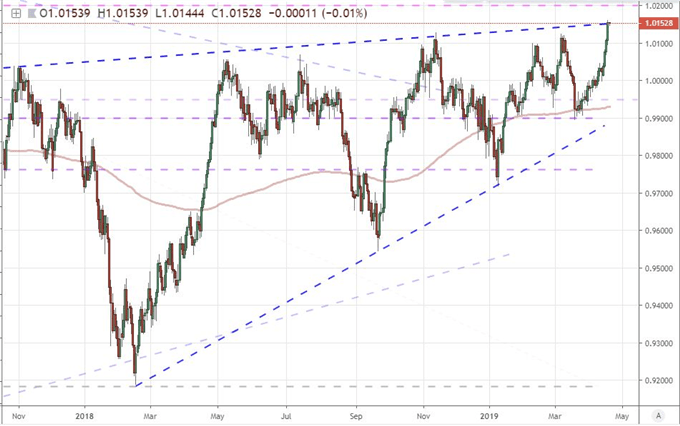