Thursday is expected to provide increased volatility EUR pairs as the European Central Bank (ECB) announces its interest rate decision. The last meeting in April saw key interest rates left unchanged and a continued dovish stance as its members repeated that they would continue to re-invest the principal payments from its bond-buying programme (QE) while keeping rates unchanged for the remainder of the year.

Economic data released in the last few weeks paints a grim picture for the Eurozone, with the latest hit coming from May’s weaker-than-expected inflation figures. On top of the weakening data, there are ongoing trade tensions between the US and China which are dampening the global economic outlook, increased Brexit uncertainty and Italy’s ongoing budget indiscipline. Considering all these factors there is no expectation of the ECB’s easing monetary policy anytime soon; and bonds are pricing in just that, with yields falling to near-record lows across the globe.

A final reading of Q1 GDP is to be released on Thursday morning before the rate meeting, and although no significant change is expected, the updated growth forecasts for 2020 could provide some insight into how policymakers see growth prospects in the near future, with special focus on inflation given the disappointing figures released on Tuesday. Of key interest from this meeting is to see if the ECB members reveal any details about the new round of long-term cheap funding for Eurozone banks, TLTRO III.

The last round of TLTRO financing which took place in 2016 was priced at the ECB’s -0.4% deposit rate, meaning that lenders were being paid to borrow money to lend. But that was three years ago when the ECB was still trying to cope with the effects of the Eurozone debt crisis. A lot has changed since then, and although the last quarter of 2018 and the beginning of 2019 have seen economic growth struggles around the globe, the Eurozone’s Q1 GDP growth of 0.4% shows that the economy is still managing to grow despite the troubles it faces.

Moreover, since the lows seen in 2013, the Eurozone lending growth rate has been steadily increasing in the last few years, with positive growth in place since the last time the ECB was deliberating on the terms and conditions of cheap lending to banks. Because of this, the terms of the new round of TLTROs may be less generous this time around. 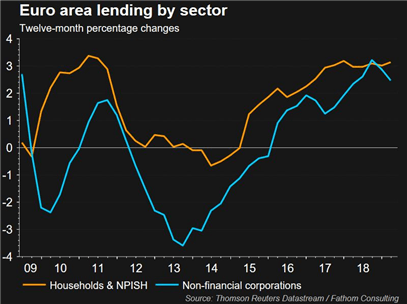 Why the Need for Negative interest rates?

The intended purpose of negative interest rates is to push up inflation by increasing the amount of lending in the economy. A negative rate means that people could borrow at more favourable terms, but would in turn charge people for depositing money, thereby making saving less attractive.

In theory, lower interest rates allow banks to lend at more favourable rates without changing their interest margin – the difference between the rate at which they lend and the rate at which they fund their lending – which would lead to fewer credit losses and increased spending in the economy. An improvement in macroeconomic conditions would boost corporate profitability which would have a positive effect on jobs and wage growth. But most banks fear that charging a client for depositing their money would put people off saving and depositing money, which has led to banks not being able to pass on the full effect of negative rates on to clients. This can have a negative effect by squeezing bank’s profitability.

It raises the question as to why a bank would lend money in a negative interest rate environment given that the lender is the one that bears the risk of default. But some central banks, like the ECB, are running out of ways to stimulate the economy and turn to the use of negative interest rates as a measure of last resort to avoid a deflationary spiral – where people hold on to cash as they wait for economic conditions to improve which leads to further weakening of the economic environment with a negative effect on jobs.

The ECB Could be Looking at Extending Negative Rates for Longer

Mario Draghi has previously mentioned that the ECB would be looking into whether measures are needed to mitigate the negative impact that negative rates can have on lenders. A possible way would be to introduce a tiering system that would only charge deposits over a certain threshold, a measure that has been used in other countries in the past. Such a move could open the possibility of a longer period of negative rates or even a cut in interest rates, which would raise the question if Eurozone banks are relying too much on cheap funding with no obvious positive effect on inflation.