The EU will hold parliamentary elections starting this Thursday through Sunday. According to the Financial Times latest poll, the European People’s Party coupled with the Progressive Alliance of Socialists and Democrats look set to lose their combined majority. If polls are indicative of future results, EUR price weakness may persist if the rise of populism and Euroscepticism is confirmed. 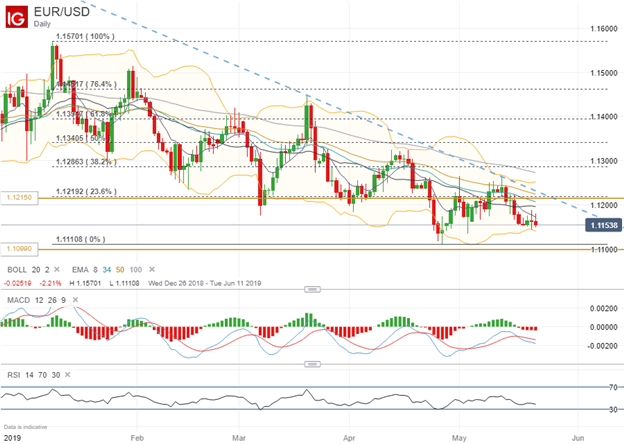 EURUSD is estimated to trade between 1.1215 and 1.1099 with a 68 percent statistical probability over the next week according to 1-week implied volatility of 4.43 percent. The upper bound of the 1-standard deviation band surrounding spot prices aligns closely with technical resistance posed by the 23.6 percent Fibonacci retracement level from its year-to-date high and low in addition to the bearish downtrend line around the 1.12 handle.

This price level has recently served as a major area of confluence and could be retested if the European People’s Party and Progressive Alliance of Socialists and Democrats can retain majority in Parliament. On the contrary, the loss of seats could push EURUSD to target 2019 lows near the 1.11 handle. 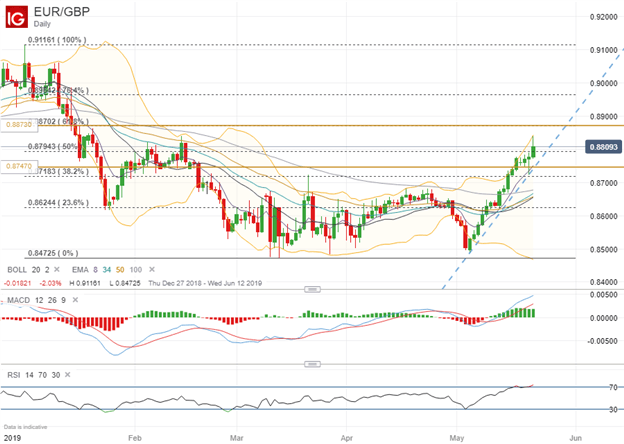 EURGBP has been on a 16-day tear of consecutive gains in response to the latest Brexit developments causing turmoil in the UK and Pound Sterling. Judging by EURGBP 1-week implied volatility of 6.14 percent, spot prices are anticipated to trade within a 127 pip range between 0.8873 and 0.8747 over the next week with a 68 percent statistical probability. Although, the recent ascent in spot EURGBP could be at risk of reversing lower if the Europe of Freedom and Direct Democracy Party – also known as the Brexit party – gains traction as it would give a blow to EU proponents. 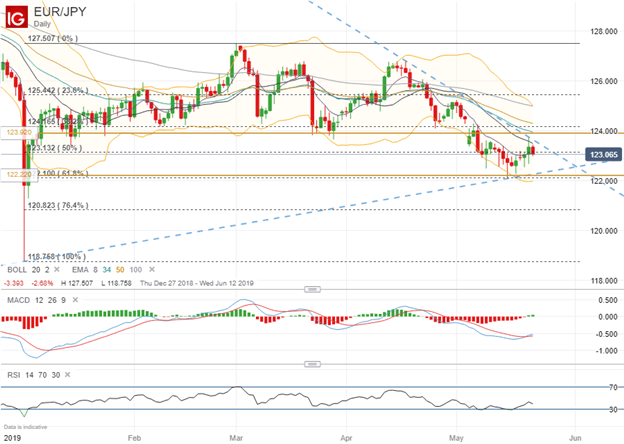 Spot EURJPY has been under pressure since mid-April along with several other ‘risky’ currencies relative to the Japanese Yen as ongoing US China Trade War tension sparked a move to safe-haven currencies. This trend could continue and send EURJPY toward the 122.00 handle where the upward-sloping trendline extended from the January 2ndJPY flash-crash bottom to the intraday low on May 15th could be tested along with the 61.8 percent Fib.

That being said, EURJPY 1-week implied volatility of 5.89 percent used to calculate the currency pair’s 1-standard deviation yields a trading range at 122.22-123.92 with a 68 percent statistical probability. Loss of majority power between the European People’s Party and Progressive Alliance of Socialists and Democrats could shudder Euro bulls and push EURJPY back on its more recent downtrend. The risk of further downside in spot EURJPY is also posed by the threat of looming global risk trends and deteriorating market sentiment.