The Euro launched a cautious recovery against the British Pound since I highlighted bullish reversal signals earlier this month. These were a Morning Star candlestick formation which was accompanied with positive RSI divergence. The latter indicated fading downside momentum in EUR/GBP’s downtrend that began in early 2019 which ended up bottoming above 0.8472 in March.

Since then, the pair has stalled under a range of former support-turned-resistance between 0.8668 and 0.8698 on the daily chart. Curiously, a bearish Evening Star candle was formed which may end up guiding the pair lower towards the psychological barrier between 0.8530 and 0.8472. If this is the case, keep an eye on the April 2018 lows around 0.8620 which has acted as support and resistance on multiple occasions.

What this means in the bigger picture from a technical perspective is that general consolidation in EUR/GBP between 0.8472 and 0.8698 may keep persisting. As always, a breakout in either direction should need confirmation. You may follow me on Twitter here @ddubrovskyFX as I closely watch the pair’s performance for signs that its range-bound trade may end. 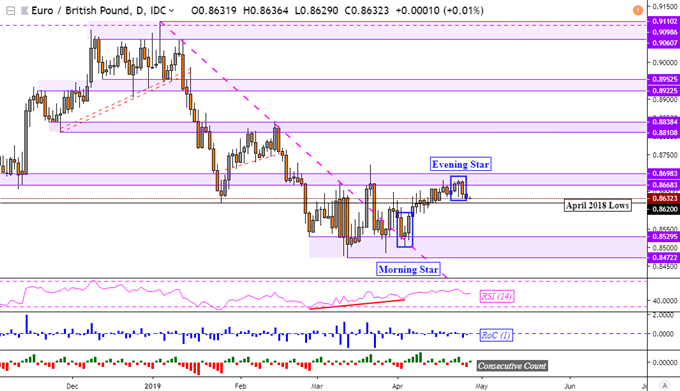 Meanwhile on the next chart below, sentiment readings hint that the EUR/GBP price trend may soon reverse lower even though traders generally remain net-short. There are fewer traders net-short than previously and compared to last week. If you would like to learn more about how to use it in analysis, join me every week on Wednesday’s at 00:00 GMT as I uncover what positioning has to say about prevailing market trends. 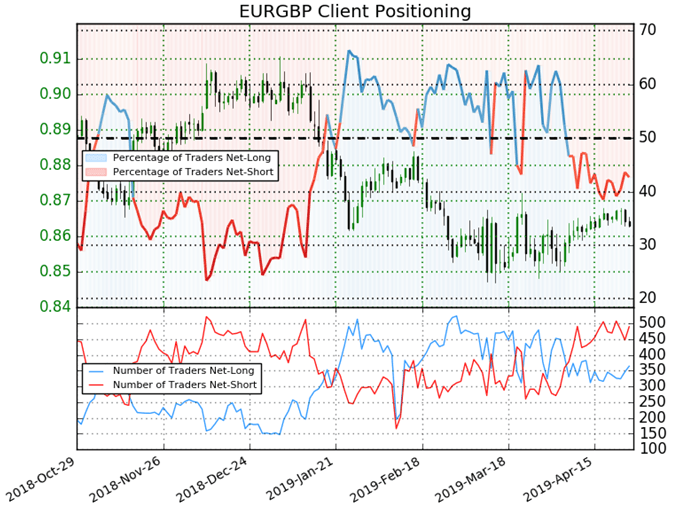