The Euro was the worst-performing major on Thursday, declining with front-end Eurozone bond yields signaling increasingly dovish ECB monetary policy expectations. Euro sellers had disappointing German wholesale inflation and Eurozone PIM data to compel them. This underpinned concerns that ECB President Mario Draghi noted about the outlook for growth being tilted to the downside from April’s rate decision.

On a daily chart, EUR/USD declined by the most in a single day in almost four weeks (-0.6%). Prices fell under a near-term rising support line that was initiated by a bullish Morning Star at the end of March. This was also after support-turned-resistance held at 1.1302. Negative RSI divergence also preceded the turn lower over the past 24 hours. With that in mind, EUR/USD is eyeing support next at 1.1176. If broken, the dominant downtrend from a year ago may resume. 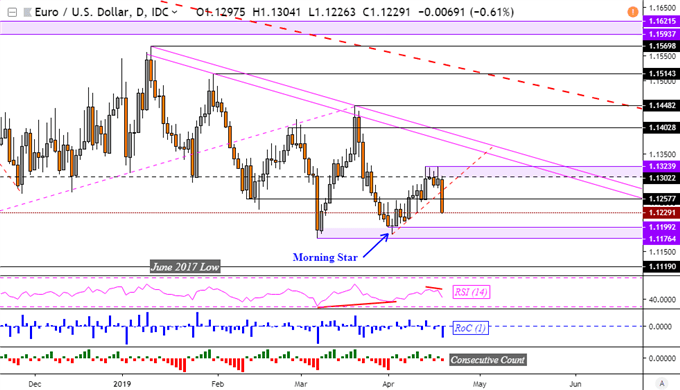 Amidst the backdrop of economic weakness from Europe and the Euro, the US Dollar was quick to capture the attention of traders. Better-than-expected US retail sales data offered the Greenback a further boost, but softer market manufacturing and services PMI data took some of that away. While the latter also hurt the S&P 500, it ended the day higher as it was supported by the industrial sector.

With US markets offline on Friday due to the Good Friday holiday, expect thin and more illiquid-than-usual trading conditions during the Asia Pacific trading session. The Nikkei 225 may gap to the upside as it echoes gains from the Wall Street trading session, but follow-through may be lacking until next week. As such, the anti-risk Japanese Yen may remain mute, brushing aside local inflation data given a status quo BoJ.