The US Dollar traded narrowly lower on Wednesday despite bullish behavior on a couple of important fundamental developments. First, the Greenback rallied as ECB’s President Mario Draghi sunk EUR/USD in the aftermath of the central bank’s interest rate announcement. Mr Draghi reiterated that risks to the Euro-Area are still tilted to the downside, as anticipated.

His speech largely overshadowed March’s US inflation report which was mixed. While core CPI missed expectations (2.0% y/y versus 2.1% estimated), headline CPI unexpectedly soared from 1.5% prior to 1.9%. This was the most aggressive positive change since the end of 2016. In the aftermath of the inflation data and Mario Draghi, USD declined into the FOMC meeting minutes.

The statement noted that Fed officials generally saw that a patient approach was appropriate. That may have disappointed some doves with Fed funds futures pricing in a greater than 50% chance of a cut by year-end. DXY rose on the release on the chart below. A similar reaction was witnessed from AUD/USD over the past 24 hours. It climbed after RBA Deputy Governor Guy Debelle hinted that a wait-and-see approach for interest rates seemed like the appropriate path. 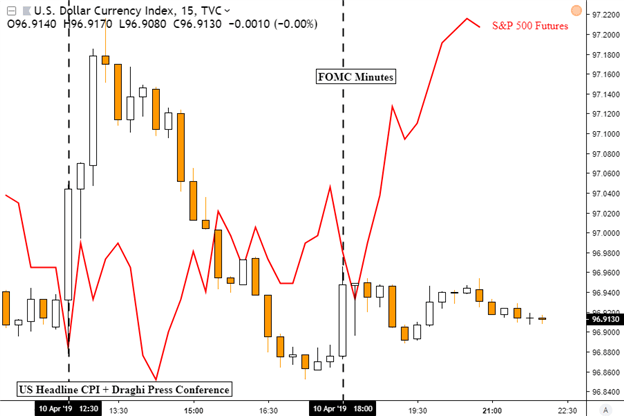 Despite its decline on Draghi’s speech, EUR/USD extended its climb by the end of the day as it is now on its best winning streak since the middle of March. This followed the emergence of a Morning Star candlestick pattern and positive RSI divergence, both typically bullish price signals. As such, we may see a test of resistance next around 1.13022, guided by a rising support line from the bottom in early April. 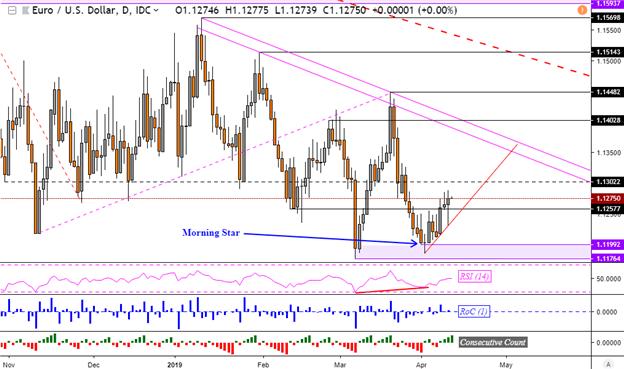 The S&P 500 closed to the upside on Wednesday, but it wasn’t enough to overcome a bearish reversal signal. Associated futures are pointing cautiously higher, indicating that there may be upside progress to have in equities during the Asia trading session. This may sink the anti-risk Japanese Yen.

Meanwhile, the Australian Dollar eyes upcoming Chinese inflation data. According to the Citi Surprise Index, data out of the world’s second-largest economy has been tending to outperform as of late, opening the door to an upside surprise. If this is the case, AUD/USD may find support given that China is Australia’s largest trading partner, implying upside knock-on effects, especially against the New Zealand Dollar.