EUR/USD pares the decline from earlier this week as mixed data prints coming out of the U.S. economy drag on the dollar, and the exchange rate may stage a larger rebound ahead of the Non-Farm Payrolls (NFP) report amid the failed attempt to test the 2019-low (1.1176).

Updates to the ISM Non-Manufacturing survey showed the index narrowing to 56.1 from 59.7 in February to mark the lowest reading since August 2017, and the renewed weakness in business sentiment may become a growing concern for the Federal Reserve as the Trump Administration struggles to reach a trade deal with China.

In response, the Federal Open Market Committee (FOMC) may continue to alter the forward-guidance for monetary policy as the central bank plans to wind down the $50B/month in quantitative tightening (QT) by the end of September, and a growing number of Fed officials may show a greater willingness to insulate the U.S. economy as ‘data arriving since September suggest that growth is slowing somewhat more than expected.’ 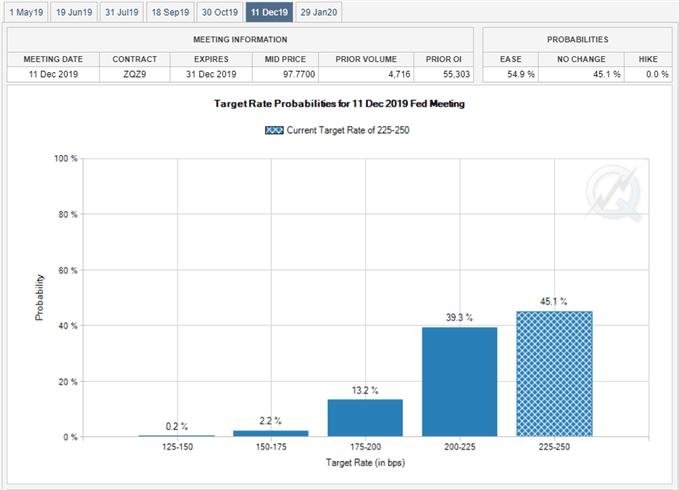 As a result, Fed Fund Futures still reflect a greater than 50% chance for a rate-hike in December, but it remains to be seen if the central bank will abandon the hiking-cycle as Chairman Jerome Powell & Co. forecast a longer-run interest rate of 2.50% to 2.75%.

With that said, the U.S. dollar may face a more bearish fate over the near-term as the FOMC responds to the weakening outlook for growth, with EUR/USD at risk of staging a larger rebound ahead of the Non-Farm Payrolls (NFP) report in light of the failed attempt to test the 2019-low (1.1176).Sign up and join DailyFX Currency Analyst David Song LIVE for an opportunity to discuss potential trade setups. 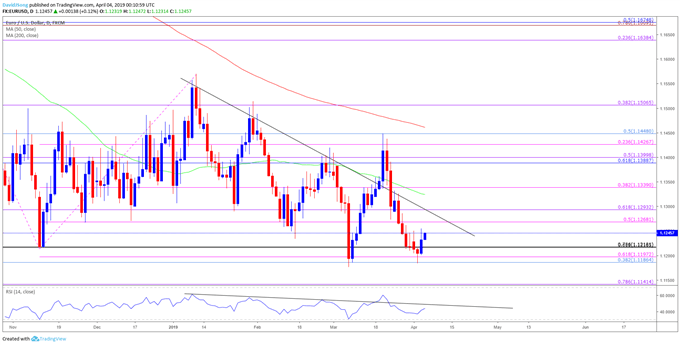 The broader outlook for EUR/USD remains clouded with mixed signals as both price and the Relative Strength Index (RSI) snap bearish formations from earlier this year after trading to a fresh yearly-low (1.1176).

For more in-depth analysis, check out the 2Q 2019 Forecast for the Euro