Since I pointed out a bullish reversal warning in early May, the Euro has advanced over four percent against the British Pound. Taking a look at technical analysis, can that be sustained? As of late, the EURGBP uptrend has slowed after the psychological barrier between 0.8811 and 0.8838 was taken out. But, it appears that it left a mark on the currency pair.

As EURGBP approaches the next major resistance level, which is a range between 0.8923 and 0.8953 on the chart below, keep an eye on support. That would be a rising channel going back to the middle of May highlighted in red below. Meanwhile, negative RSI divergence warns that upside momentum is fading. This can lead to a turn lower ahead. 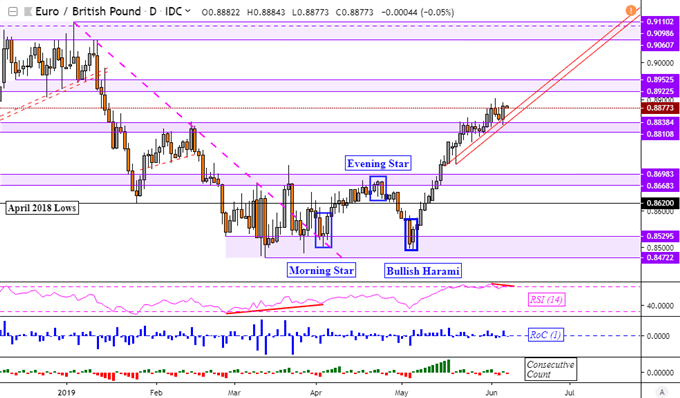 Zooming in on the 4-hour chart to take a closer look at near-term behavior, an area of resistance appears to have established itself at 0.8888. Negative RSI divergence is also present here. If this area were to be taken out, that would open the door to testing key resistance noted earlier. Otherwise, a descent through 0.8811 exposes 0.8698.

Meanwhile, IG Client Sentiment is showing that EURGBP is one of the most heavily-invested net-short trade when comparing overall conviction to other currencies, commodities and equities. This is still offering a EURGBP bullish-contrarian trading bias and may result in further gains down the road.

Join me every week on Wednesday’s at 00:00 GMT as I uncover what market positioning has to say about the prevailing trends in currencies, equities and commodities 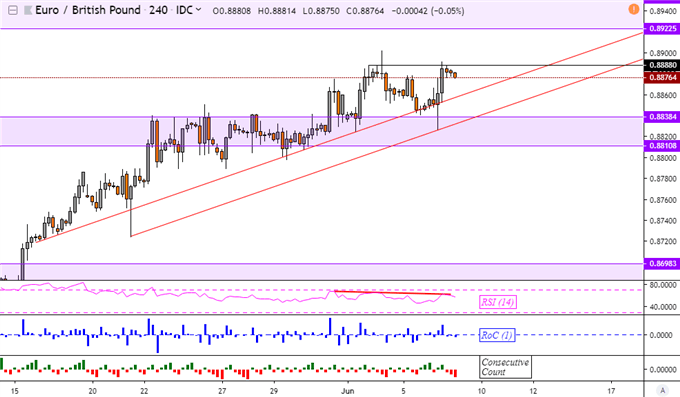