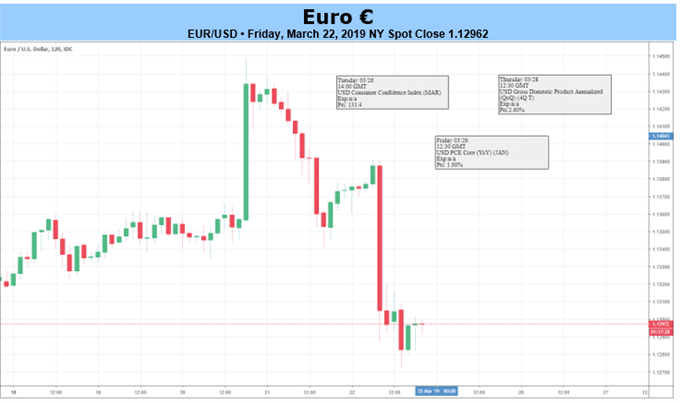 Gain confidence in your Euro trading strategy with our free guide!

A burst of seesaw volatility ultimately left the Euro with a loss last week. The currency surged higher Wednesday as an unexpectedly dovish Fed policy announcement drove a powerful push higher from the benchmark EUR/USD exchange rate. Follow-through was not in the cards however, with subsequent corrective pullback turning into an outright selloff courtesy of dismal PMI data.

The week ahead offers ample opportunities for data-driven price swings. Germany’s IFO survey of business confidence as well as CPI updates from the Eurozone’s top-three economies are on tap. Downside surprises echoing the broad tendency of incoming news-flow to undershoot baseline forecasts over recent months might drive a dovish shift in ECB policy bets, weighing on the single currency.

A flurry of scheduled speeches from central bank officials – most notably from ECB President Mario Draghi – might add to policy-based selling pressure. As it stands, a new round of LTROs has been unveiled and interest rate hikes have been delayed at least through 2019. Sellers may be emboldened by language suggesting that even greater accommodation may be in tow as growth sputters.

Looking for a technical perspective on the euro? Check out the Weekly EUR Technical Forecast.

On the external front, the next chapter in the messy Brexit saga is probably the most potent of catalysts. Parliament will once again be asked to vote on a version of the withdrawal bill backed by UK Prime Minister Theresa May. Two earlier drafts suffered crushing defeat. If this one passes, “exit day” will move to May 22. If not, the new deadline will be the uncomfortably closer April 12.

The House of Commons has already pronounced its distaste for a “no-deal” Brexit. If Mrs May falls short again, the government is likely to apply for a longer-term extension and plan for the UK to take part in the upcoming EU Parliament elections. This might lift the Euro against most of its top counterparts (perhaps excluding the Pound itself) in that it will further defer the “point of no return”.