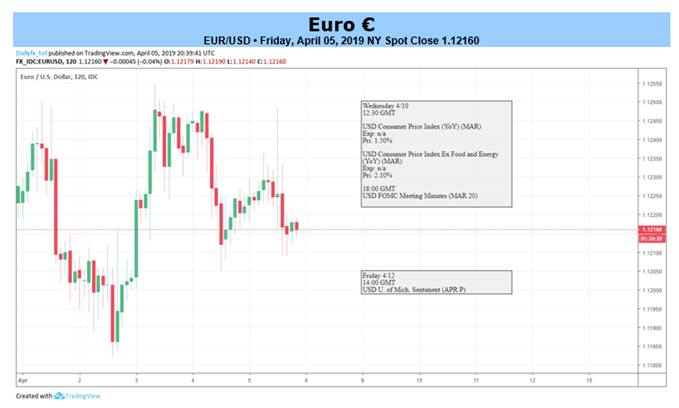 The Euro spent most of last week consolidating, but its trajectory this year thus far has been cautiously lower with prolonged episodes of sideways trading. Make no mistake, these past 5 days serve as a reminder of the immense pressure the single currency faces down the road. A slew of disappointing European economic data showed that the ECB’s cautious tilt in March was not in vain.

It began with softer-than-expected Eurozone CPI data in March, which continues following a path of disinflation since October. Later in the week, German factory orders unexpectedly contracted by the most since 2009. Meanwhile, economic growth forecasts for 2019 in the powerhouse of Europe as well asin Italy were revised to the downside.

For more updates on EUR/USD, check out our Euro landing page!

On the chart below is the Bloomberg correlation-weighted index of the Euro overlaid with German front-end government bond yields and the Citigroup Eurozone Economic Surprise Index. The latter shows that since the middle of March, economic data out of the Eurozone has been tending to increasingly underperform relative to expectations. Note that all 3 items on the chart have been falling in tandem as of late. 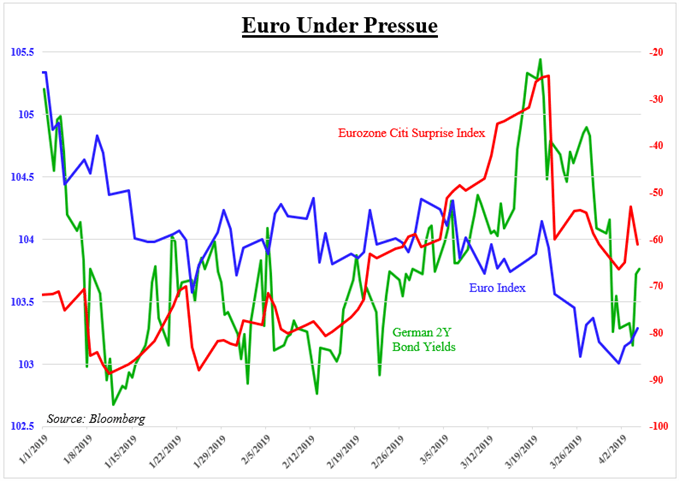 EUR/USD could be at risk to losses on the upcoming European Central Bank rate decision. In the previous statement in March, the ECB pushed back rate hike expectations as it trimmed growth forecasts. Since then, and as noted above, regional growth weakness has largely been the case. President Mario Draghi may continue reiterating the need for caution in his press conference.

Want to know where the Euro might be going in the second quarter? Read our recently released EUR/USD Q2 2019 fundamental and technical forecasts!

In the minutes from the March meeting, heightened uncertainty was a concern, referencing elevated trade tensions in the world’s largest economies. China is one of Europe’s biggest external trading partners and its economy is slowing, along with the EU. This past week, China’s President Xi Jinping, along with Vice Premier Liu He, hinted that considerable progress in trade talks with the US have been made.

Yet, the Euro was unable to find much support, even though equities did, which is a little concerning. As negotiations reach closer towards an end, it becomes more prevalent of the sticking issues that remain. Most notable are those about intellectual property rights. Donald Trump’s top economic adviser, Larry Kudlow, said on Friday that while talks with China are not quite done yet, more headway is possible.

In addition to the ECB and trade talk updates, keep a close eye on regional data. German CPI and wholesale inflation statistics will cross the wires. Eurozone industrial production is also due. If the trend of disappointing outcomes continues, the Euro could extend losses on increasingly dovish monetary policy expectations.

Brexit remains a wildcard with the unconditional extension to the withdrawal deadline coming up on April 12th. At the end of last week, European Council President Donald Tusk offered the UK a 12-month divorce delay. Meanwhile, Prime Minister Theresa May asked for an extension to June 30th. With that in mind, all eyes will be on the emergency Brexit summit with EU leaders on April 10th for the next step forward.