A call by Matteo Salvini, who leads the right-wing League party in Italy, for the Italian government to be ready to break the EU’s debt ceiling of 3% of GDP and raise the country’s debt to 140% of GDP if necessary could undermine the Euro in the days ahead.

Salvini, who is also one of Italy’s deputy prime ministers, is currently campaigning for the European Parliament elections on May 26 and was immediately criticized by Luigi Di Maio, who leads the anti-establishment 5-Star Movement.

The two parties are currently coalition partners but Di Maio, who is deputy prime minister too, said Salvini was being “pretty irresponsible” to create market tensions by “shooting off” about increasing the country’s already high debt.

If this sparring continues, it could well weaken the Euro despite some positive Eurozone data released Wednesday and reports that US President Donald Trump is expected to delay a decision on tariffs on imported cars and parts by up to six months that lifted EURUSD late in the European day. 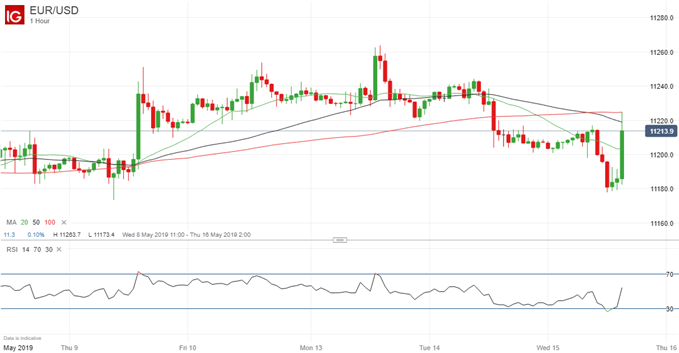 In Germany, flash first-quarter GDP data released Wednesday showed a 0.4% increase quarter/quarter after a flat reading in the previous quarter – although year/year figures showed a drop in growth to 0.6% from 0.9%. As for the Eurozone as a whole, data released later revealed that growth doubled to 0.4% quarter/quarter and was stable at 1.2% year/year.

This more optimistic economic data will likely be ignored though as risk appetite remains poor, prompting money to flow into safe havens such as German government bonds. Bund yields were lower in almost all maturities Wednesday, with the 10-year yield hitting its lowest level since September 2016 before rallying on the auto tariffs news.