See the DailyFXQ2 FX forecast to learn what will drive the currency throughout the quarter.

The outlook for the Euro has become increasingly bearish since the breakout of its multi-month range with little in the way of key support till the 1.1000 figure. Momentum indicators across the daily, weekly and monthly timeframes also lean to a bearish bias, which in turn suggests that the downside trend could be sustained. Eyes will be on for a weekly close below the 61.8% Fibonacci retracement to confirm increased bearish sentiment. Besides the 1.1000 handle, near term support at 1.1070 may temporarily stem declines, while notable support is situated at the 76.4% Fibonacci retracement. On the option front, investor demand for protection against Euro losses has surged (full story) 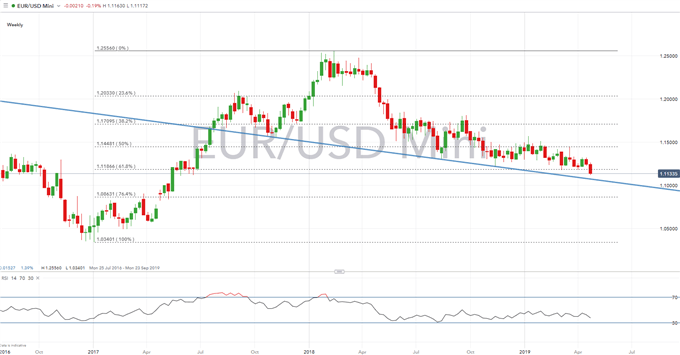 With the sentiment around the Euro notably bearish in recent sessions, the currency has underperformed relative to safe currencies, one of which has been the Japanese Yen. The cross failed to hold consolidate above 126.00, while making a decisive move through trendline support, as such, the cross is now testing critical Fibo support at 124.16. A drop below however, opens a move towards 123.60-80. On the topside, a closing break above 125.40 would be needed to ease the bearish momentum.

Given the softer outlook for both the Euro and GBP, the cross maintains its broad range with weak trend signals suggesting this is likely to remain the case in the short term. EURGBP has struggled ahead of 0.87 and as such looks to test support at the 23.6% Fib (0.8624) and 50DMA (0.8600). On the topside, the 100DMA sits at the 0.8700 figure, while the 38.2% Fib resides at 0.8718. A decisive move either side would be needed to give this cross a sense of direction, failure to do so sees EURGBP maintain its range since March 2019.