January’s US retail sales rose 0.2 percent and beat the 0.0 estimate, while German industrial production came in at the forecasted -3.30 percent. Both reports did not elicit a strong market reaction in either the Euro or Dollar-weighted index despite US data broadly outperforming that day. Event-risk out of Asia yesterday remained mostly muted, while uncertainty out of the UK jolted markets.

The Bank of England announced it was tightening bank liquidity buffers before Brexit, the EU was said to increase the cost of Brexit by almost 40 billion GBP if the UK asked for an extension and reports were leaked that only two cabinet members supported British Prime Minister Theresa May’s deal. After the news crossed the wires, SP&500 futures along with Sterling currency crosses all fell as the outlook soured risk appetite.

However, the previous day’s negative market response was quickly reversed less than 24 hours later. In early Tuesday trade, May’s Deputy David Lidington announced that there won’t be a delay to vote on the PM’s Brexit deal and the impasse over the controversial Irish backstop may be resolved. Mrs. May added that she has secured a clear timetable for the backstop to be replaced by “alternative arrangements”. GBP subsequently rallied.

Traders will now be eyeing the much-anticipated Brexit vote, which if rejected could create a “political crisis” – to quote Lidington – and could cause Sterling to plummet alongside risk-on assets. US CPI is also scheduled to be released today but may be eclipsed by the outcome of the divorce. Leading up the event, liquidity may be tight as investors clench their fists and hold their breath to see what the UK Parliament decides. 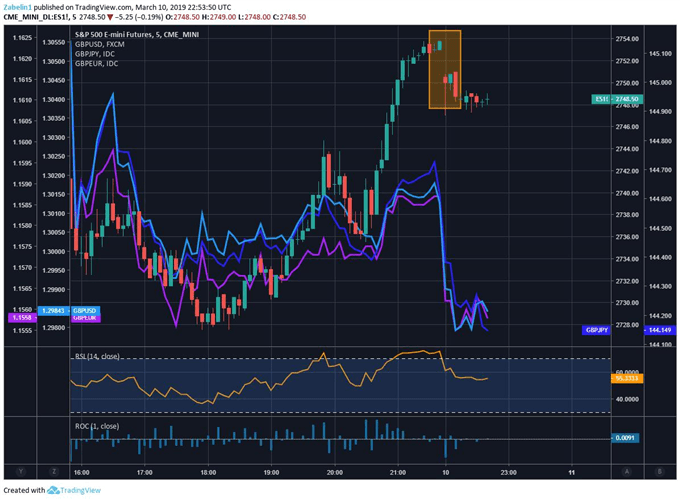