The ECB monetary policy announcement headlines the economic calendar in European trading hours. A change in stance is not expected this time around, but traders seem primed for a sharp downgrade of official economic forecasts to set the stage for further easing in the months ahead. As for the likely vehicle, the consensus view appears to favor round of TLTRO liquidity injections into the banking sector.

A large downward adjustment in growth and inflation projections seems to be all but priced in at this point and may not translate into a significant response from price action by itself. Rather, traders will weigh the tone at the post-announcement presser with ECB President Draghi to gauge the likely timing of stimulus expansion. An apparent sense of urgency is likely to weigh on the Euro while hesitation may give it a bit of a lift.

The central bank’s disposition may also prove formative for broader sentiment trends. Worries about slowing global growth have consumed investors recently. With that in mind, the sense that the ECB will offer support relatively sooner rather than later may buoy risk appetite, boosting the cycle-linked Australian and New Zealand Dollars and punishing the Yen. Indecision may translate into the opposite result. 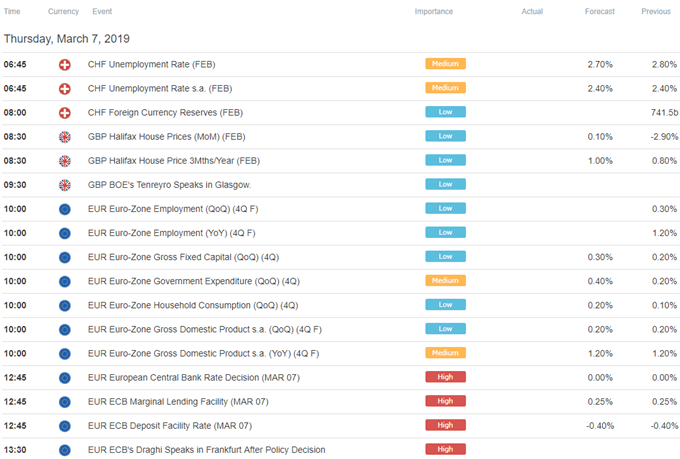