The US Dollar took the spot as the worst-performing major currency on Monday as its relatively high yield worked against its favor in a “risk off” trading dynamic. The probability that the Federal Reserve will deliver a rate cut in July, as priced in by Fed funds futures, rose to 70% from just 47% on Friday. That the central bank has room to cut is a clear disadvantage to the Greenback if those bets are realized.

However, the potential for additional downside performance in the medium-term is unclear due to its status as a highly–liquid reserve currency. For the time being, the S&P 500 ended the day 0.28% to the downside, unable to find support by the markets pricing in a more-dovish Fed. The US 10-year and 3-month bond yield curve inverted deeper to levels not seen since April 2007 as recession fears climbed.

The drop in US equities could be pointed to poor performance in tech-based stocks, in addition to broader fundamental themes such as a US-Mexico trade war which poses as a risk to the Canadian Dollar. Shares of Facebook, Apple and Alphabet declined across the board. This appeared to be due to knock-on effects after the US Department of Justice announced antitrust probes into Google following Wall Street close on Friday.

Broad weakness in the Greenback lead EUR/USD to its best day since January. This was as anticipated in this week’s Euro technical forecast following bullish reversal warnings. But, the trend seems biased to the downside in the medium-term. Also as expected, near-term resistance held under 1.1262. If broken, this exposes a descending channel of resistance going back to January on the chart below. 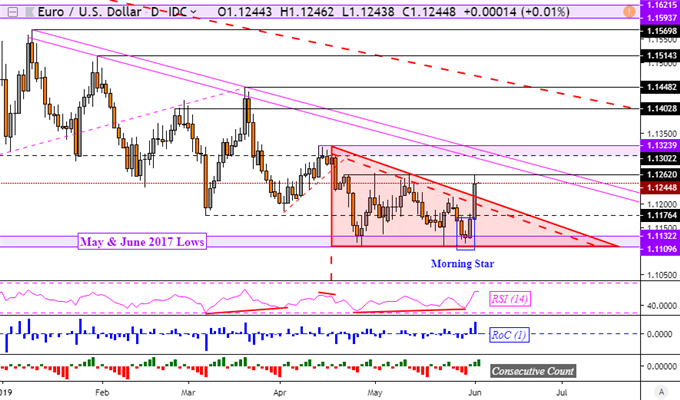 The anti-risk Japanese Yen failed to materially find gains over the past 24 hours. However, the similarly-behaving Swiss Franc did as CHF/JPY rose on what could have been regional haven demand. Interestingly, the pro-risk Australian and New Zealand Dollars held up relatively well. This may have been due to broad declines in the US Dollar as markets priced in lower and lower rates in the world’s largest economy.

Speaking of, the Australian Dollar is almost certainly looking at a rate cut from the RBA during Tuesday’s Asia Pacific trading session. Out of 38 estimates pulled by Bloomberg, only 3 sources are envisioning a hold at 1.50%. With that in mind, a surprise rate hold from the central bank will surprise markets more so than last month, when the odds were closer to 50-50.

That is because the RBA has spent the past month preparing the markets for a cut, much like the RBNZ before it delivered one. As such, a cut will not surprise markets and it by itself won’t be enough to sustain weakness in the Aussie. It all depends on the central bank’s forward guidance where it might focus on a data-dependent approach. That could potentially offer a neutral outcome for AUD/USD in the near-term.

Join me as I cover the RBA at 4:15 GMT and the reaction in the Australian Dollar, where I will also be taking a look at the path forward for the Aussie.