EUR: Italian budget concerns are back on the rise, after the EU threatened Italy with a $3-4bln fine for breaking EU budget rules. As such, Bund-BTP spreads are back on the rise at 285bps, which in turn has seen the Italian Banking Index come under notable pressure throughout the session. However, despite the rising risk of a confrontation between Italy and the EU, the Euro remains somewhat muted with the currency holding below the 1.12 handle.

CAD: The Canadian Dollar is on the defensive with marginal losses of 0.2% as wider bond spreads and softer oil prices weigh on the currency. Consequently, USDCAD is back towards the higher end of its 1-month range ahead of tomorrow’s BoC meeting.

ZAR: The South African Rand came under notable selling pressure, falling over 1.5% against the greenback as focus shifts towards President Ramaphosa’s cabinet announcement. The move lower in the Rand stemmed from reports that David Mabuza looks set to be re-appointed, raising questions over Ramaphosa’s efforts to tackle corruption, given that Mabuza has previously been linked to a series of scandals. 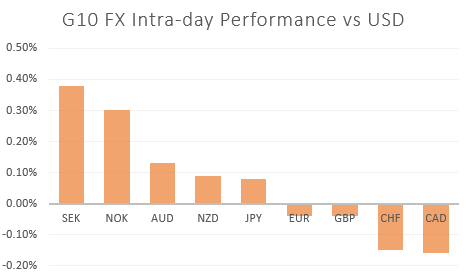