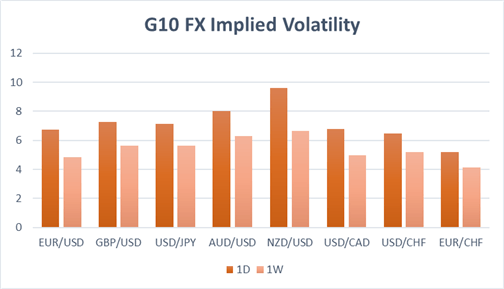 Despite the raft of key US data releases in the form of US CPI, Retail sales and U. of Michigan Sentiment figures, implied vols across the G10 FX complex are relatively muted. That said, implied vols in the antipodeans are slightly firmer with AUD traders placing close attention to the latest jobs report, in which another rise in the unemployment rate could support the case of another RBA rate cut in the near-term.

EURUSD: Softening US data and rising prospects of an imminent rate cut from the Federal Reserve has seen option traders become the most bullish on the Euro since the beginning of 2018 with EURUSD reclaiming 1.13. Risk reversals have moved further into positive territory suggesting that demand for Euro calls is higher than puts. However, given that implied vols in the Euro are heading lower, this implies that any gains would most likely be gradual as opposed to a sharp rally. Alongside this, sizeable vanilla options around 1.1300-1.1360 could see price action somewhat muted in the absence of a fresh fundamental catalyst. 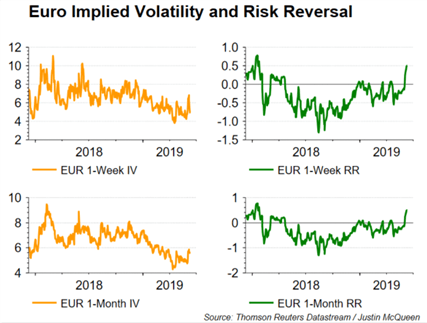 USDTRY: Eyes will be on the upcoming Turkish Central Bank rate decision, where the central bank is expected to maintain interest rates at current levels as authorities continue to fight steep inflation. While inflation on a yearly basis has dropped from 25% to 18.7%, the CBRT is expected to maintain its tightening bias in order to keep inflation from spiking again. Consequently, while implied volatility in the Turkish Lira has eased alongside buyers of topside protection. 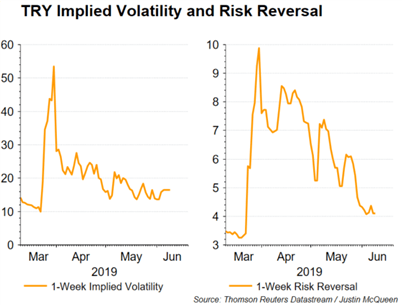