EURUSD continues to trade below the 1.12 handle on mixed EU Confidence. Data for the month of May has come in better than expected but figures for the previous month have been revised lower.

The release of the figures has had little effect on the Euro as traders remain focused on the results of the European Elections and the EU leaders’ summit to determine whether the next ECB policymaker will be more hawkish or dovish than Mario Draghi.

The pair managed to recover slightly on Monday as the results of the European Elections showed that despite centre parties losing votes, these have not only gone to populists but also to pro-European parties like the Greens and Liberals, slightly easing concerns about the up-rise in Eurosceptic parties. Italy remains one of the main points of concern for the EU, as Matteo Salvini’s right-wing League party claimed victory by taking 34.3% of the votes. His position on EU Budget Limitations is expected to re-open the budget clashes with Brussels, leading to a widening of the spread between Italian and German bonds.

The beginning of the European session saw some support from the Euro despite worse than expected German consumer confidence figures released earlier. Both EURUSD and EURGBP were trading higher, with the latter pushing past 0.8835 and recovering most of the ground it had lost since the close n Friday. 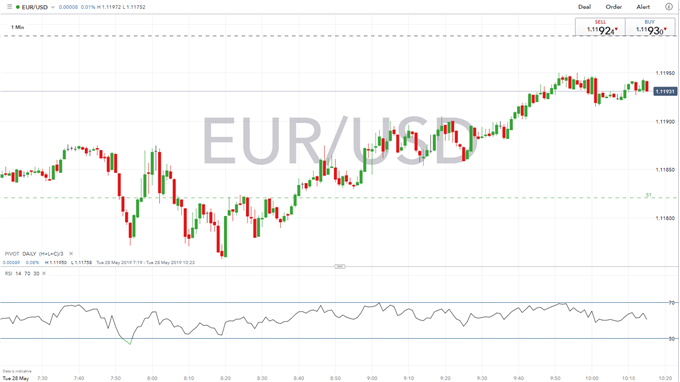 The session ahead has little in terms of key economic releases from the Eurozone, the main pressure on EURUSD is expected this afternoon as US Consumer Confidence figures are released this afternoon, with an expected rise to 130 from 129.2.

The final figures for Euro-Zone Consumer Confidence in the month of May remained constant at -6.5 after being revised lower to -7.3 whilst the Eurozone Economic Confidence recovered to 105.1 beating expectations of 103.9.

The rise was led by both the Services and Industrial Confidence improving in the month of May. Services confidence was up to 12.2 from 11.8 and Industrial confidence recovered from -4.3 to –2.9. This figure asks for production expectations, meaning that a deterioration indicates a negative outlook for the future of the business spending and capital investment.

We typically take a contrarian view to crowd sentiment, and the fact traders are net-long suggests EURUSD prices may continue to fall. Yet traders are less net-long than yesterday and compared with last week.