The Euro failed to regain support from the release of Eurozone CPI figures after trading softer throughout most of the Asian session. EURUSD’s downtrend continued after figures revealed annual inflation rate in the Euro area increased to 1.7% in April, up from 1.4% in March, slightly higher than the 1.6% expected. Core inflation, which excludes volatile prices of energy, food, alcohol and tobacco, and is the figure the ECB uses for its policy decision, was 1.2% in April (Expt. 1.0%).

But despite better than expected inflation figures providing potential for a short rebound, EURUSD continues to trade near year-lows registered earlier in the week on the back of a less-dovish stance from the Fed’s meeting on Wednesday May 1. The pair is still trading below the 1.12 handle as traders wait for nonfarm payrolls figures, due to be released at 13.30, to consolidate a direction. A stronger than expected jobs report has the potential to reignite the prevailing EURUSD downtrend. 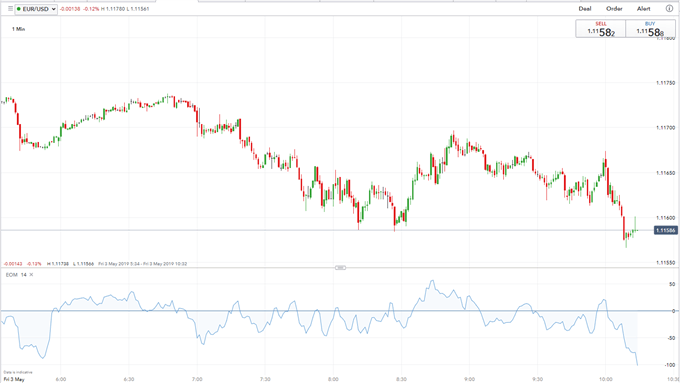 It is common for inflation to increase in the month that Easter holidays take place, especially if they fall towards the end of the month, as an increase in demand for package holidays, restaurants and hotels pushes prices higher. But keeping in mind that the Easter effect is a seasonality, inflation figures for the following months need to continue on the upside for the ECB to shift to a more hawkish stance.

As a recap of recent Eurozone data, manufacturing PMI figures released yesterday showed that figures for Spain, Italy and France were improving whilst Germany figures disappointed. Overall European Manufacturing PMI was revised upward from 47.8 to 47.9 in April, showing a small recovery from its 80-month low of 44.1 recorded in March. European CPI released today is in line with German CPI figures released on Tuesday Apr 30, showing inflation for the month of April beat expectations by 0.5 percentage points, from 1.5% expected to 2%.