After recovering most of its ground over the weekend, the EURUSD was trading softer, and below the 1.12 handle, during the European morning session, remaining mostly flat even after the EU’s Spring Economic Forecast was released. The fact is that, despite improving regional data released last week, the EURUSD struggled to find upside momentum, only managing a slight improvement after mixed US jobs data lead to US dollar weakness on Friday.

As the pair’s direction continues to be USD-dominant, the focus will shift towards the USD Consumer Price Index figure which will be released on Friday May 10. Forecasts show that US CPI is expected to have increased in April, mostly due to an increase in oil prices since the beginning of the year.

The bottom line is that the Eurozone continues to grow, albeit at a slower rate. The EU’s GDP is expected to grow at 1.4% in 2019 and 1.6%% in 2020, a downward revision from the winter forecast of 1.5% and 1.7% respectively. Consumer Price Inflation has picked up since the beginning of the year, as CPI in April was 1.7%, up from 1.4% in the previous month and beating forecasts of 1.6%. Despite the increase in prices most likely being influenced by the “Easter Bunny effect”, fundamentals show that the labour market is strong, and wages are increasing.

The focus has again shifted towards Italy, which last week emerged from a technical recession, as the country’s budget deficit is expected to increase to 2.5% of GDP, above the 2% target that was agreed with Brussels in December. After two consecutive quarters with negative growth at the end of 2018, Italy’s GDP for the first quarter of 2019 has grown by 0.2%, providing some relief for the Eurozone economy. But as Rome is reluctant to implement policies to reduce its deficit, the EU could impose an Excessive Deficit Procedure leading to Italy being fined, which could see Euroscepticism rise within the country. 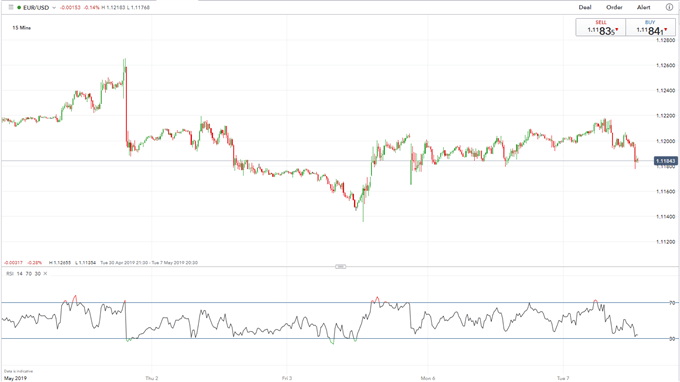 We typically take a contrarian view to crowd sentiment, and the fact traders are net-long suggests EURUSD prices may continue to fall. Positioning is less net-long than yesterday but more net-long from last week. The combination of current sentiment and recent changes gives us a further mixed EURUSD trading bias.